As planets of our solar system tug at each other with their gravitation tethers, they create a protean sea of... 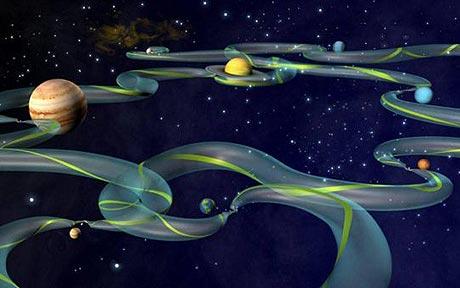 As planets of our solar system tug at each other with their gravitation tethers, they create a protean sea of forces and counter forces. But within that maelstrom lay gravitational channels that could serve as highways for future spacecraft, just as soon as Professor Shane Ross of from Virginia Tech University finishes mapping them out.

Located at the exact points between planets where the bodies exert an equal gravitation pull, these channels act like invisible ocean currents in a black, featureless sea. A space craft that maneuvers into these lanes could be pulled along to its intended destination by gravity, not pushed there by a rocket. This means the craft could reach a distant planet using considerably less fuel, or could get there much faster with the same amount of fuel.

NASA has already rode these currents once–the Genesis probe followed a gravitational channel en-route to collecting solar dust in 2004. By following the gravitational current, Genesis reached its mission point with ten times less fuel than it would have needed otherwise.

Speaking at the British Science Festival at the University of Surrey in Guildford, Ross highlighted the convenience of these gravity tubes, but also noted that they must be utilized in conjunction with regular rockets. For instance, riding a gravity channel from Earth to Mars without any other boosts would take a couple thousand years.

However, by complimenting conventional propulsion, a completed map of these gravity highways could speed up and expand space travel much like a more accurate understanding of ocean and wind currents aided 15th and 16th century European exploration.

[via The Daily Telegraph]