Seeing things in outer space that aren't necessarily there 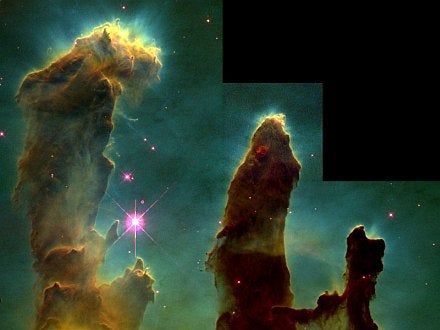 The Hubble Space Telescope captured this image of the Eagle Nebula in 1995. NASA
SHARE

As bizarre as it may seem now, in the late 19th and early 20th centuries it was commonly believed that there were artificial canals on Mars. The rumor started in 1877 when Italian astronomer Giovanni Schiaparelli observed long, linear features on Martian surface through his telescope. He named the features “canali,” which translates to “channels” or “canals” in Italian. Schiaparelli did not intend for the term to be interpreted as “artificial” canals; he actually meant simply “narrow waterways.” But the coined phrase took on a life of its own, and some people even believed that Martian intelligent life had constructed a canal system to bring water from the polar regions to its cities.

Astronomer Percival Lowell was a strong proponent of this theory, and he envisioned Mars as a planet laced with engineered waterways and canals. Because straight lines don’t typically appear in nature, Lowell rationalized, they could only have been made by an intelligent civilization. In 1909, a Greek astronomer named E.M. Antoniadi used an 83-centimeter telescope to observe Mars when it was in opposition to the Earth, which is the best time to observe a planet. He concluded that the canals were an optical illusion, and the Martian canal theory slowly began to lose support.

Metal Bridges on the Moon 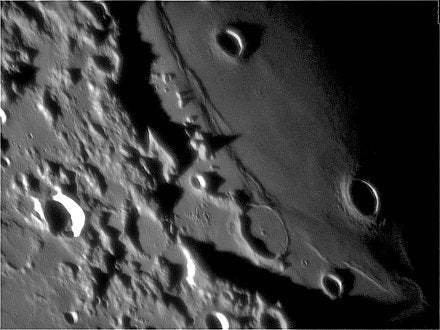 Bridge on the Moon

This image shows the region on the Moon in which John J. O’Neill reported seeing a gigantic natural bridge in 1953.

In 1953, John J. O’Neill, a science editor with the New York Herald Tribune, reported seeing something that looked like a bridge in the Moon’s Crisium Basin region. He reported, “a gigantic natural bridge having the amazing span of about 12 miles from pediment to pediment.” Although O’Neill had been careful to call it a “natural bridge,” soon thereafter British astronomer and moon mapper H. Percy Wilkins confirmed the bridge’s existence and mentioned it in his book Our Moon. In fact, he hinted that the bridge was artificially engineered. Wilkins had a following of believers — including several astronomers — who were convinced the bridge existed. But the British Astronomical Association wasn’t so supportive — they forced Wilkins to resign as director of the Lunar Section.

The “bridge” was, of course, an illusion created by lighting conditions and shadows on the Moon’s surface. The myth was finally put to rest when the Apollo missions obtained photographs of the region.

The “Face” on Mars

The Face on Mars

In the 1970s, the Viking mission took this image of a formation in the Cydonia region of Mars that resembled a human face.

For many, the lessons of the “bridge” on the Moon didn’t sink in, and in the 1970s light and shadow combined once again to create an illusion — this time on the surface of Mars. Photographs taken of the Martian surface by the Viking Mission cameras captured a landform that resembled a human face. The “face” — which was actually a mesa — was located in the Cydonia region of Mars, an area whose geography is much like that of the Colorado Plateau in the southwestern United States. The Viking cameras happened to take the image at a time of day when shadows caused the mesa to have a face-like pattern, so scientists on the Viking team jokingly named the land formation the “Face on Mars.” They had no idea what they had started, and a media frenzy ensued, with many face-believers being convinced that NASA was covering up evidence of civilization on Mars.

The Mars Face mania became so intense that when the Mars Global Surveyor arrived at Mars in the late 1990s, NASA instructed mission scientists to reprogram the spacecraft so that it could look in the direction of “the face” and take the highest resolution photograph possible. The resulting images confirmed that the “face” was indeed an eroded mesa that, at certain times of the day, looked like a face due to shadows created by gullies in the eroded rock. In fact, the “face” is only one of thousands of similar mesas, buttes, and ridges in the Cydonia region.

The Incan City on Mars 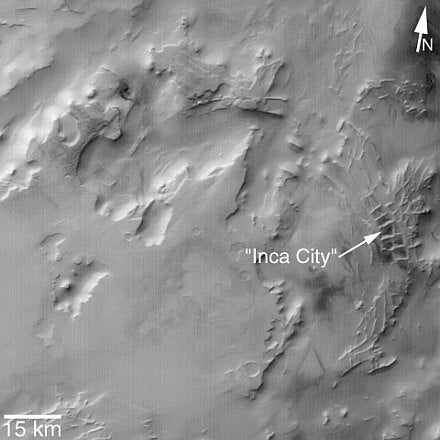 In 1972 scientists on the Mariner 9 mission gave the informal name “Inca City” to this area of intersecting ridges in the south polar region of Mars.

Some die-hard Mars Face fans still believed in a conspiracy even after images from the Mars Global Surveyor revealed a mesa, and their beliefs were further fueled by images that showed what looked like an ancient Incan city. The photo, which was taken of an area near Mars’ south pole, shows a series of grid-like formations. In 1972 a team of Mariner 9 scientists informally gave the name “Inca City” to the region because it resembled an ancient ruin. This time, the coined phrase didn’t spark a media spectacle, but scientists puzzled over what process could have created the unique pattern.

In 2002, scientists solved the mystery while analyzing images taken by the Mars Orbiter Camera. The images revealed that the ridges of “Inca City” were part of a larger circular structure, which is likely a large, ancient impact crater on Mars. 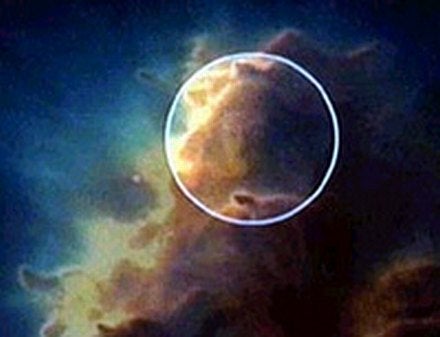 Jesus in the Nebula

The circled area in the Hubble image shows what many people perceived to be the face of Jesus.

The Face of Jesus in the Eagle Nebula
Since its launch in 1990, the Hubble Space Telescope has sent hundreds of thousands of images back to Earth, giving us a close-up look at many mysteries of the universe. NASA has showcased many of these images in the “Astronomy Picture of the Day” series. One of the most famous images in this series was of the Eagle Nebula, taken by Hubble in 1995 and titled “Pillars of Creation.” After a photo was shown on CNN, the network began receiving hundreds of phone calls from people who believed they saw the face of Jesus in the nebula.

Nebulae are interstellar clouds of dust, hydrogen gas, and plasma — think clouds in space. So, just as people sometimes think they see “faces” in clouds on Earth, they also can perceive familiar shapes and forms in nebulae. What looked to many like the face of Jesus was actually a swirl of gas located about 7,000 light years from Earth. In fact, as Dr. Philip Plait points out on the web site Bad Astronomy, when the light that allowed the image to be taken left the Eagle Nebula cloud, it was still another 5,000 years before Jesus would even be born.

A Happy Face on Mars?

Psychologists say humans often perceive random shapes and forms as significant — a phenomenon known as pareidolia. But for scientists who spend hours analyzing satellite data and space imagery, assigning humorous names to unusual formations that look like familiar shapes is all in a day’s work. Take, for example, the “Happy Face Crater” and the “Valentine’s Day Mesa” on Mars. 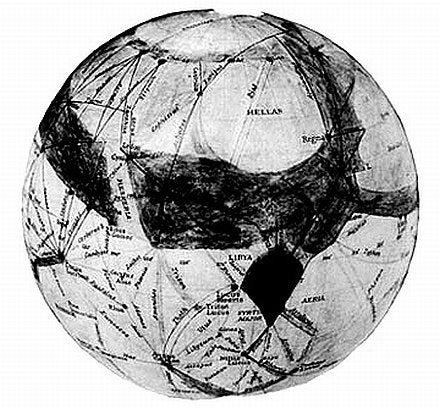 Percival Lowell mapped the straight lines he observed on the Martian surface, which he believed to be intentionally engineered canals.

Bridge on the Moon

This image shows the region on the Moon in which John J. O’Neill reported seeing a gigantic natural bridge in 1953.

The Face on Mars

In the 1970s, the Viking mission took this image of a formation in the Cydonia region of Mars that resembled a human face. 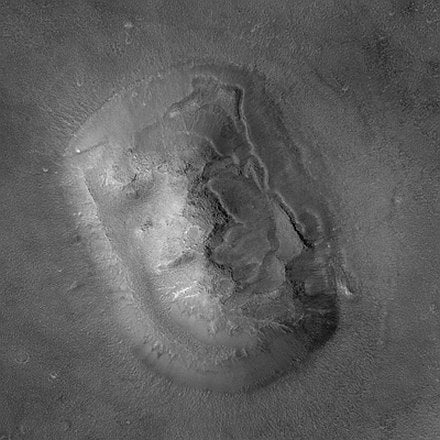 In 2001, the Mars Orbiter Camera acquired this high-resolution image of the same formation in Cydonia, which showed the “face” to actually be a highly eroded mesa that looks like a human face at certain times, due to shadows and lighting.

In 1972 scientists on the Mariner 9 mission gave the informal name “Inca City” to this area of intersecting ridges in the south polar region of Mars.

The Hubble Space Telescope captured this image of the Eagle Nebula in 1995.

Jesus in the Nebula

The circled area in the Hubble image shows what many people perceived to be the face of Jesus. 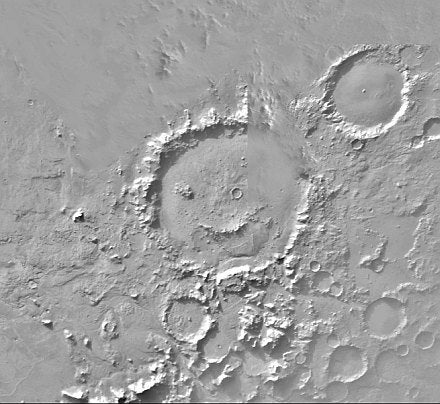 Galle crater on Mars, which first showed up in Viking Orbiter images, looks like a “happy face.” 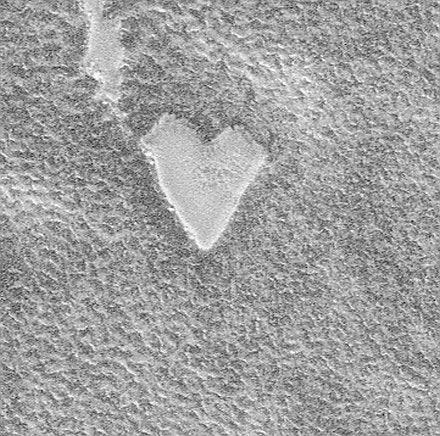 The Heart of Space

In 1999 the Mars Orbiter Camera captured this image of a heart-shaped mesa in Mars’ south polar region.
Space
hoaxes
illusions