China Cracks Down on Bad Breath in Space 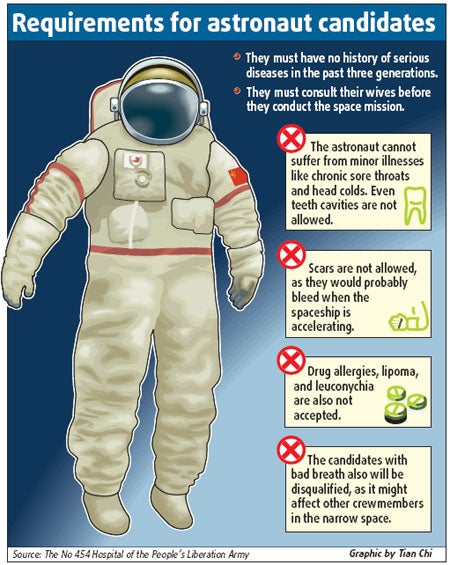 China’s future astronauts can’t have bad breath, cavities, or scars if they hope to join the next wave of Chinese space exploration. Hospitals have begun the first of three rounds of tests to weed out candidates who fail to meet the rigorous standards.

Body odor could put off fellow astronauts in the confines of a spacecraft, and presumably lower morale, while scars could potentially burst during spacecraft acceleration. Astronauts also cannot have any family history of serious illness, going back three generations.

“The candidates who go through all the tests and meet all the requirements can really be called super-human beings,” said Shi Binbin, director of the department of air logistics at the No. 454 Hospital, in a China Daily story.

China is only the third nation to conduct a spacewalk, and has stepped up plans to launch its own military space station by 2010. It has also begun planning a manned mission to possibly beat NASA back to the moon.

Hundreds of college-educated fighter pilots have already begun jockeying for the honor of becoming taikonauts. They face 100 tests designed to push their mental and physical limits.

Still, all the training and health in the world won’t help candidates if a spouse puts her foot down. AFP reports that prospective astronaut’s wives will get the final say as to whether their husbands ever make it into space.

The same would likely apply for husbands of potential astronauts, given that China has begun recruiting its first crop of female taikonauts.

Whatever the success of its screening process, China might want to take a cue from Japan when it comes to fighting B.O. in space — a pair of odorless undies can go a long way.