A Lunar Rocket Designed To Crash 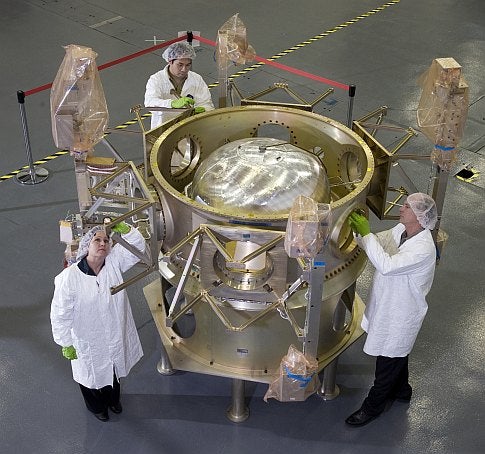 In the 1960 cartoon “Hits and Missiles,” Popeye the Sailor Man accidentally crashes a rocket into a moon made of cheese.

Popeye soon realizes he needs more fuel, “so we can gets back to Oyth,” and he goes looking for help.

When a group of NASA scientists deliberately crashes a rocket into the moon this summer, they’ll be looking for fuel, too — in a way.

They hope the Lunar Crater Observation and Sensing Satellite, or LCROSS, will tell them whether there’s any water ice on the moon. If so, it could conceivably be harvested for human use, including as rocket fuel.

The LCROSS satellite will hitchhike to the moon with the larger Lunar Reconnaissance Orbiter, or LRO; together, the missions represent NASA’s first steps in the plan to return humans to the moon and establish a lunar outpost by 2020.

In this mission, the violent demise of a NASA space probe will happen on purpose. As they examine the results of LCROSS’ demise, scientists hope to discover water vapor.

Because LCROSS was conceived almost as an afterthought and had a tight schedule and budget, it includes parts cobbled together from private industry. The craft’s infrared spectrometer comes from a company that makes a hand-held device for carpet recyclers, for instance, and one of its infrared cameras was originally designed for IndyCar racing.

“It’s amazing — if you do a search in industry and you have specific requirements, you can find instruments out there that meet your specifications. You’re actually just taking advantage of the private and commercial investment,” said Anthony Colaprete, principal investigator for the LCROSS mission, based at NASA’s Ames Research Center at Moffett Field, Calif. “It didn’t necessarily make things better, but it resulted in instrumentation and spacecraft that was good enough. That was the mantra.”

In a similar vein, the mission is also a chance for amateur astronomers to participate in groundbreaking science. The space agency is soliciting help from moon-watchers who have sent images of the moon in various phases and who will train their telescopes toward Earth’s companion to watch the impact this summer. The project is a highlight for the International Year of Astronomy.

The moon shot is scheduled for this spring, with a targeted launch date of May 21; the crash is set for Aug. 28.

During planning for the reconnaissance orbiter, engineers realized the craft’s Atlas V rocket had enough thrust to accommodate another probe, so NASA asked for proposals. Colaprete, who studies climate change on Earth and Mars, worked with Dan Andrews, now LCROSS’s project manager, and others to come up with the idea of smashing something into the moon so they could examine the debris.

They joined forces with engineers at Northrop Grumman Aerospace Systems and designed LCROSS, which was chosen from among the proposals in April 2006. The craft had been designed, built, and tested by spring 2008, an unusually quick turnaround that Colaprete said helped the team stay on target.

“It led to a design that was simple and easy to put together. If you have more time, you think about it more, things get more complicated,” he said. 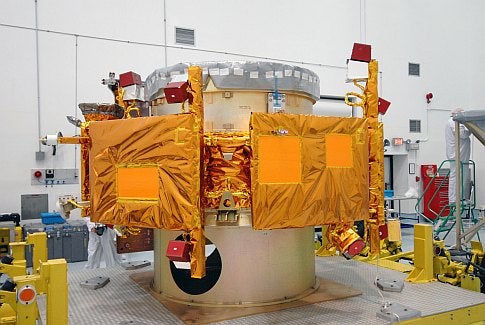 The team also looked for bargains, a novel concept in space exploration. Colaprete found several small businesses that already offered the desired instruments or could make them quickly. In one case, a camera he purchased failed in a vibration test, and NASA managers paid a visit to find out what happened.

“It was suggested that we open it up and look at it, find out what’s wrong, and I said, ‘No, it’s under warranty. If you break the seal it’s not under warranty.’ And they didn’t believe me,” Colaprete said.

He sent it back, and the manufacturer learned a wrong part had been installed. The company fixed it and sent it back. It passed the test.

“Otherwise, I would have spent I don’t know how many tens of thousands of dollars trying to fix this camera,” Colaprete said.

After launch in May, the LRO will be sent on its way, leaving the Atlas V’s upper-stage Centaur rocket with the smaller satellite. The pair will whip around the moon in an elongated orbit — partly designed to burn off the Centaur’s remaining fuel, so the satellite’s water-vapor-seeking instruments aren’t fooled by excess hydrogen.

On final approach, the Centaur will separate from the spacecraft, crashing into the chosen crater at 9,000 kilometers per hour.

LCROSS must crash in a dark crescent of a crater, probably one near the Moon’s north pole. The crater will have to be deep enough that its walls keep part of its surface in permanent shadow; that way, it will remain cold enough that ancient ice, perhaps delivered by a comet, would never have had a chance to melt.

The Centaur’s impact will create a new crater and a huge cloud of ejected dust and dirt.

Four minutes later, LCROSS will fly through the dust, furiously collecting and relaying data back to Earth before it meets its end, which will cause a second debris plume. Data from the dust clouds will help scientists determine whether there’s water under the lunar surface.

Earth-based scopes, including the Keck and Infrared telescopes at Mauna Kea, Hawaii, will be watching the moon August 28 to look for water vapor and other matter. The ejecta cloud ought to be large enough to be seen with a 10-inch telescope, however, meaning many an amateur astronomer will be glad to have a full moon for once.

The satellite is being prepared for launch at Kennedy Space Center.