Since budget cuts and the inability to overcome problems like boredom and high radiation doses have ruled out any manned... 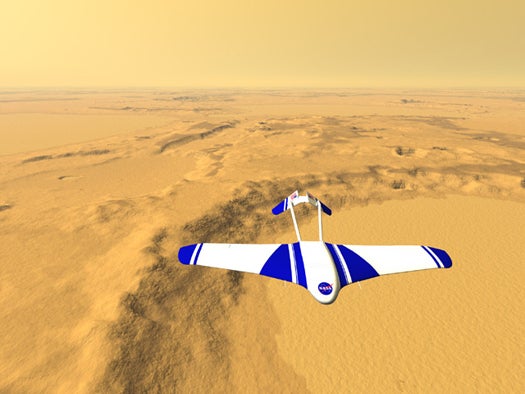 Since budget cuts and the inability to overcome problems like boredom and high radiation doses have ruled out any manned mission to Mars in the foreseeable future, NASA has shifted gears back towards a program of robotic exploration. To that end, NASA now wants a rocket-powered UAV to fly around the Red Planet, photographing the surface.

The plane, repetitively named ARES (not to be confused with NASA’s shuttle replacement, also named ARES), would fly to Mars in a regular rocket. Once it reaches the fourth rock from the Sun, it would pop out of the capsule, deploy its wings, and fire the rockets for an hour-long flight through the Martian sky. During that flight, ARES would cover about 373 miles, which is a little less than 100 times the area covered by the Spirit rover over the last five years.

Any aircraft flying on Mars would need some serious horsepower. The Martian atmosphere is 169 times thinner than the air here on Earth, so generating lift over ARES’s wings may prove tricky. NASA has already devoted five years to initial design, but still has a long, long way to go before this thing takes flight. Of course, when the end product is a Martian rocket plane, the wait is worth it.