The U.S. space agency and Microsoft want you to help count Martian craters in the name of science 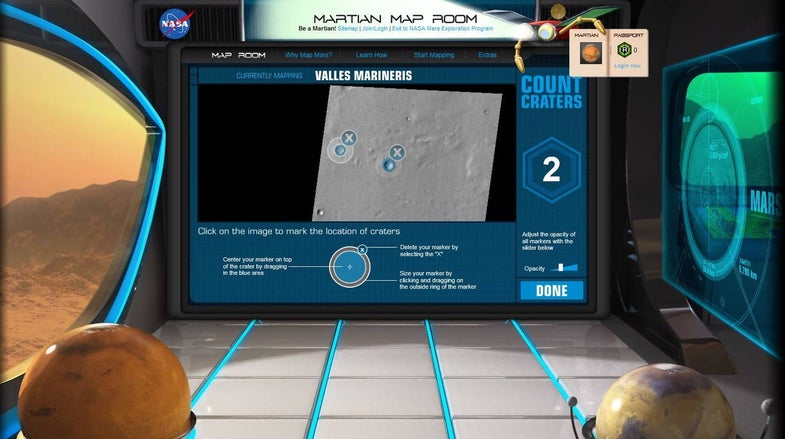 Citizen scientists and bored netizens can now help NASA map out the Martian surface for future astronaut explorers. Even kids can enjoy the thrills of Mars cartography — namely counting craters and aligning higher-resolution images on top of a low-res map.

The U.S. space agency teamed up with Microsoft to create the online games at a newly launched website. Players can rack up reputation points for a robotic animal avatar by placing three images at a time on a Martian map, starting with the Valles Marineris canyon.

This goes beyond just providing mild amusement for the Internet hordes. NASA hopes that the crowd-sourcing can harness the efforts of thousands to create better Mars maps and smoother zoom-in views, which might allow scientists to better interpret Martian surface changes. Don’t worry if you get one or two craters wrong, either, because there’s probably another dozen people who got it right.

Crowd-sourcing has previously helped create everything from Star Wars remakes to better movie recommendations on Netflix. Even the Pentagon’s mad science lab DARPA has tapped into crowd-sourcing as a way of leveraging social networks in a bizarre balloon-finding competition.

Perhaps Microsoft’s involvement might mean that this fun exercise in intellectual child labor could even become available someday for the Xbox Live community. If, you know, shooting down drones in Modern Warfare 2 isn’t doing it for you.