This Professor Calculated The True Cost of Destroying The Death Star 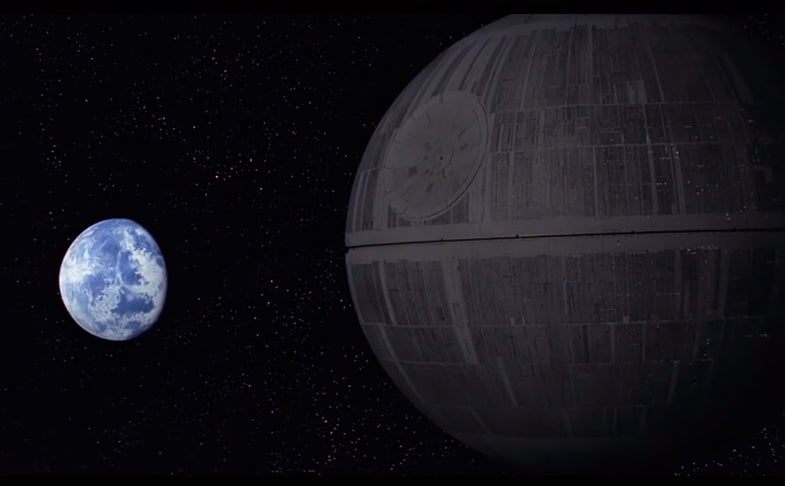 Everyone, from President Obama down to a lowly moisture farmer on Tatooine can agree that planet-destroying weapons are bad news. Barring a few Imperial hold-outs, it’s clear that not only is the Death Star massively expensive, the best case for using a Death Star is war crimes on a galactic scale. So it should come as no surprise that not only are Death Stars themselves bad news, but the economics of building them might mean that, if the Empire collapses, the mortgage on the Death Star could send the entire galaxy into ruins as well.

One of the more perplexing facets of the upcoming Star Wars: The Force Awakens is how, after the Rebel Alliance successfully destroyed two Imperial Death Stars (and the Emperor himself), the titular war is still going on. Mild spoilers to follow.

As already spoiled, the Empire’s legacy seems to live on in The First Order, and what remains of the Rebel Alliance is now The Resistance. Unlike other visions of a post-Imperial galaxy for Star Wars, there is no glorious New Republic spreading freedom and democracy wherever it goes. So how could a victorious Rebellion succeed in battle but fail in governance?

Economics, it turns out. “It’s a Trap: Emperor Palpatine’s Poison Pill,” is a new, highly detailed analysis paper of the economic fallout of the Death Stars’ destruction published today on the open source server Arxiv. The work of financial engineering professor Zachary Feinstein of Washington University in St. Louis, it is a deep and thorough dive into the financial systems of a galaxy far, far away.

The true cost of the Death Star

The Death Star in life was a threat to individual planets, but according to Feinstein’s paper, in death it was a guarantee of financial destruction. First, Feinstein uses estimates of the steel in the Death Star to reach a lower bound for the cost of the raw material. Then, by comparison to an aircraft carrier, Feinstein derives the cost of the non-steel components of the Death Star. That tells us the rough, low estimate cost of the station itself, but even astronomical costs on earth are insignificant on the scale of Galactic Empire.

So to figure out the relative cost, Feinstein goes with the reasonable assumption that the Death Star took a Manhattan Project proportion of resources to make, and working backwards derives the relative size of the Imperial economy. The net result: if the first Death Star cost the Empire $193 Quintillion (in 2012 U.S. dollars), then the gross domestic product of the galactic economy was roughly $4.6 Sextillion a year.

The economic impact of destroying the two Death Stars

Feinstein isn’t directly concerned with the costs. Instead, he wants to understand the banking and financial mechanisms that sustained a project like that. Following logic stitched together from prequels and Wookiepedia, we get a galactic banking sector with assets that are 60 percent of the gross galactic domestic product.

To avert this catastrophe, the Rebel Alliance would need to have not just the legitimacy of Imperial defeat, but tremendous reserves of hard cash to bail out the collapsing financial system. Feinstein concludes:

Cruel as the Empire was, there’s some strong economic reasons for how they were able to stay in power. As for the Rebels — sadly, it seems they left their wallets on Alderaan.