Houston snubbed, but Kennedy Space Center in Florida gets a shuttle 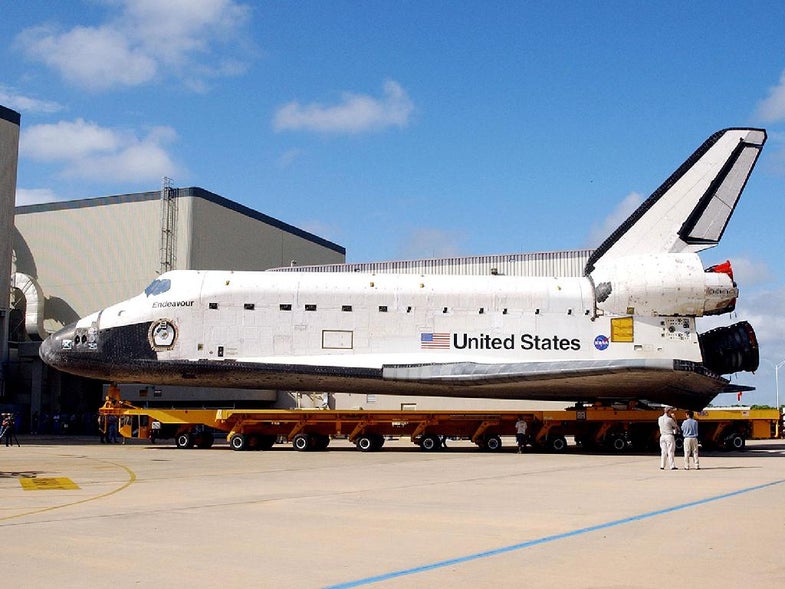 [Updated] After the final flight this summer, America’s space shuttles will retire to four locations across the continent, from California to Florida. Houston, home of Mission Control, was snubbed — it will receive shuttle seats, with actual training simulators leaving the JSC grounds for other museums in the midwest.

Atlantis will go to KSC, home of every historic launch in NASA history. The news provoked cheers from the audience assembled to hear NASA Administrator Charles Bolden announce the orbiters’ new homes, on the 30th anniversary of the first shuttle flight and the 50th anniversary of the first human spaceflight. Millions of visitors to KSC and the other institutions will be inspired by the chance to see a real, flown shuttle, he said.

Endeavour will wind up at the California Science Center in Los Angeles, Bolden said.

Discovery, the first shuttle to officially retire and NASA’s most-traveled orbiter, will go to the Steven F. Udvar-Hazy Center at the National Air and Space Museum in Washington, D.C.

Space shuttle Enterprise, which never reached orbit but served as the first test vehicle, already inhabits that space, and it will be transferred to the Intrepid Sea, Air and Space Museum in New York.

“Take care of our shuttles,” Bolden told the recipients, his voice breaking, as it did several times throughout his speech.

Olga Dominguez, assistant administrator for NASA’s Office of Strategic Infrastructure, led the process of determining where the shuttles would wind up. In a press conference Tuesday, Dominguez said her office studied each location’s regional population and its potential for broad domestic and international access, as well as cost of transporting the orbiters and other factors.

“It is unfortunate that the middle of the country did not fare as well as the coasts,” she said. “But we are giving them many of our specialized simulators … they will also have a wonderful story to tell about NASA and about the space program.”

Many other institutions had lobbied for shuttles, most notably Johnson Space Center, home of NASA’s Mission Control. JSC will receive seats flown on the shuttle, Dominguez said. Houstonians were upset, to say the least; several media representatives peppered Dominguez with questions about why the nation’s fourth-largest city did not get a shuttle. One reporter asked where Houston failed.

“Houston did not in any way, shape or form fail,” Dominguez replied. “We simply did not have enough to go around.”

Several other museums and educational institutions will be allocated various shuttle artifacts, Dominguez said. The Adler Planetarium in Chicago and Texas A&M University will each get shuttle simulators; the Museum of Flight in Seattle, which is building a new wing, will receive a full-size fuselage training module; and the National Museum of the U.S. Air Force at Wright-Patterson Air Force Base, in Dayton, Ohio, will get a crew-compartment training module.

Congress had directed NASA to look at each location’s connection to the space program, and Dominguez noted several connections in New York, L.A. and Florida. The shuttles were designed at Rockwell International outside L.A., and Edwards Air Force Base, their backup landing site, is nearby; the USS Intrepid, now a museum in New York, served as the primary recovery ship for the Mercury 7 capsule; and the Smithsonian is the curator of Enterprise, along with many other national space treasures.

But she didn’t mention Houston, where most astronauts live, and whose connections to the space program are more immediately obvious than those of New York or L.A.

In his speech earlier Tuesday, Bolden said he appreciated the KSC employees’ gratitude, and acknowledged it had been a difficult decision. He promised other competing institutions would receive shuttle components and hardware.

Bolden, a former astronaut who flew on Atlantis, teared up while he spoke of the crew members who perished in the Columbia and Challenger disasters. “They were all true American heroes who made the ultimate sacrifice,” he said.

Some JSC advocates have been pushing to receive pieces of Columbia and Challenger, but Dominguez said there are no plans to release those artifacts. She did acknowledge that it is possible NASA could someday move the existing orbiters, but for now, the last flights and the ensuing delivery process are the focus.

“NASA is focused first and foremost on safely flying the last two flights,” she said.

Bolden also told NASA employees to stay focused on ensuring the final two missions are completed safely. He also had hopeful words for the post-shuttle era: “We will continue to lead the world in human exploration and discovery, and don’t let anybody tell you otherwise,” he said.

Everyone who spoke on Tuesday’s shuttle commemoration celebrations had similar words, hoping for a future successor that will again send Americans into space. But they carefully sidestepped the fact that NASA does not yet have one.

The orbiters are slated to reach their final destinations by the end of 2012.