A Quick Primer On America’s Spaceports

Everything you need to know about U.S. portals to space 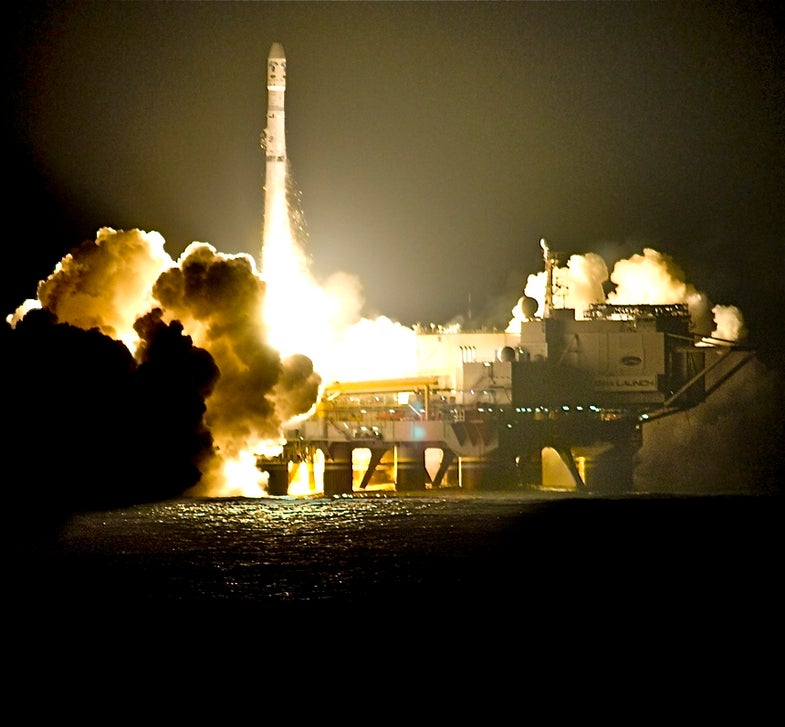 Going to space is getting easier all the time. For anyone willing to trade giant piles of ephemeral cash for a few short minutes outside the atmosphere, here is a handy map of all American spaceports, released in February by the Federal Aviation Administration. 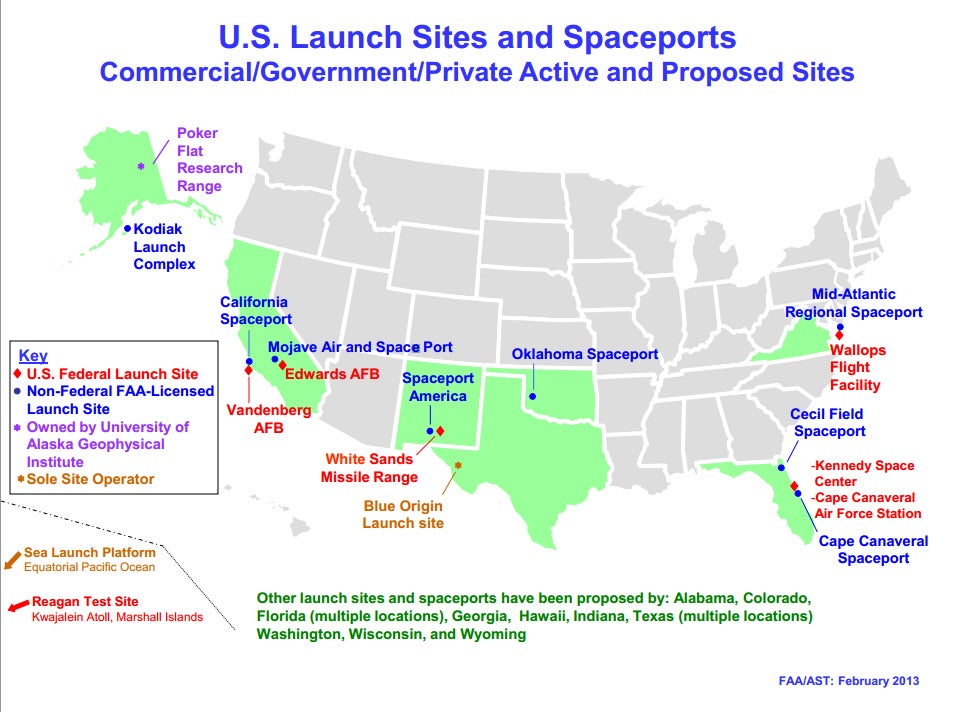 Map Of Spaceports In The United States

While there are more spaceports proposed, the ones that exist at present are in three rough clusters, which I’ve helpfully named: Pacific Fringe, South by Southwest, and Central and South Atlantic.

Here’s what you need to know about these portals to space.

In the Pacific Ocean are two launch sites: the first is Sea Launch Platform, which was originally a shared Norwegian, Russian, Ukrainian, and American venture. Following a 2009 bankruptcy, the Russian company Energia took over as majority owner. The U.S. still uses this site to launch commercial satellites into space. 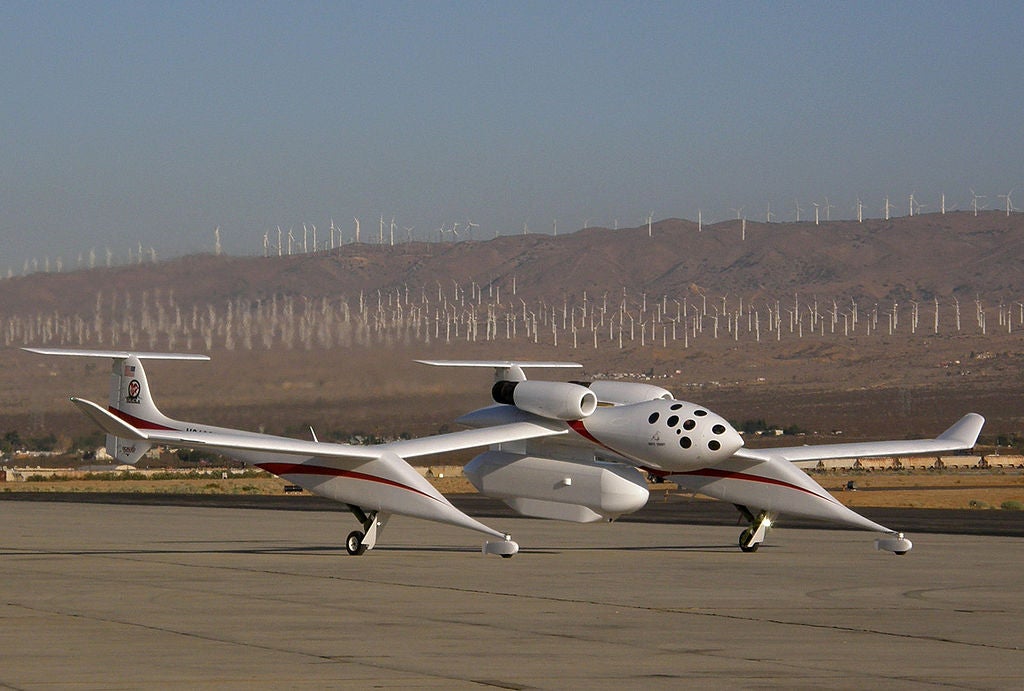 In addition to two Air Force bases (Vandenberg and Edwards) that double as experimental test sites, California has a pair of spaceports named, inventively, California Spaceport and Mojave Air and Space Port. These are exciting! Mojave saw the first successful privately funded commercial spaceflight, with Space Ship One in 2004. California was also home to Space Authority, which “technically, [had] no authority over anything.” It then dissolved, having actually no authority over anything.

On Kwajalein Atoll & Wake Island, the Reagan Test Site tries out missiles and missile defenses. It also monitors satellites, but it seems like a stretch to call it a spaceport.

New Mexico, Texas, and Oklahoma all have spaceports, with New Mexico weirdly dominant in this region for the first time ever. The Land of Enchantment boasts Spaceport America, which sometimes sends tourists into space. It also had a really bizarre christening with a rappelling Richard Branson:

The White Sands Missile range is where all sorts of big, fast, explode-y things get tested, sometimes near space. Also, if you go to White Sands you can see the first-ever nuclear weapon test site. It is… not terribly exciting.

In Oklahoma, there is the Oklahoma Spaceport. Its website looks rather Geocities and may just might be on the way out. That’s okay—a ghost spaceport is kind of awesome, too.

Texas has the launch site for Blue Origin, Amazon CEO Jeff Bezos’s private space venture. Right now it’s a test site, but maybe in the future it will be a proper place for tourist trips to the edge of space and back.

Virginia has two spaceports, the Mid-Atlantic Regional Spaceport (MARS, guys, get it?), and NASA’s Wallops Flight Facility. MARS sends rockets into space and has a hilarious “ZeroGravity, ZeroTax” tax incentive going for it. Wallops launches rockets for NASA (including tonight’s Lunar Atmosphere and Dust Environment Explorer, which will orbit the moon and collect information about, yup, the moon’s atmosphere). 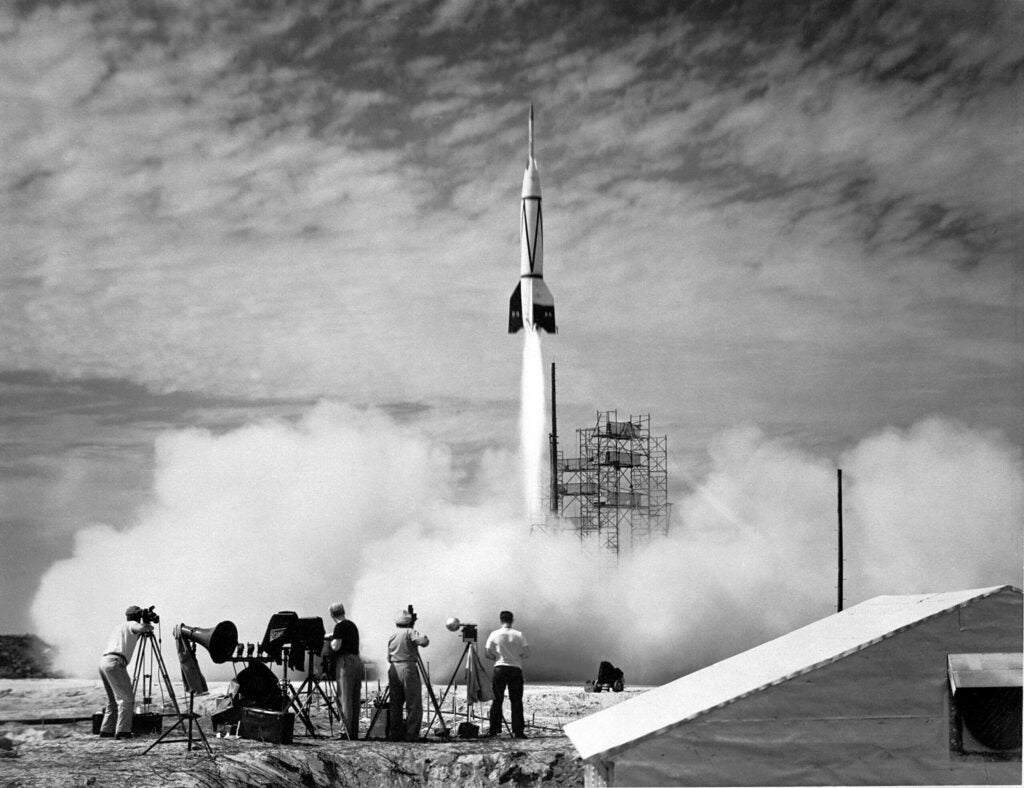 The First Rocket Launched At Cape Canaveral In 1950

Right now, we are in a transitory stage of space flight. Scientific research and military testing still dominate spaceports, with commercial satellite launches also a major part of the modern space industry. Space tourism, from companies like Virgin Galactic and maybe Blue Origin, promise a new future, albeit at a price currently beyond the means of basically everyone.

New spaceports and programs like Space X show that there’s room for innovation. Giant bureaucratic tomes like the FAA’s “2011 U.S. Commercial Space Transportation Developments and Concepts: Vehicles, Technologies, and Spaceports,” indicate we are so close to this future it’s already possible for government to make it boring, which, paradoxically, is pretty exciting.