How Many Martinis Can You Fit Inside a V-2 Missile?

In the 1930s, at a remote site called Peenemünde in the north of Germany on the Baltic Sea, a team... 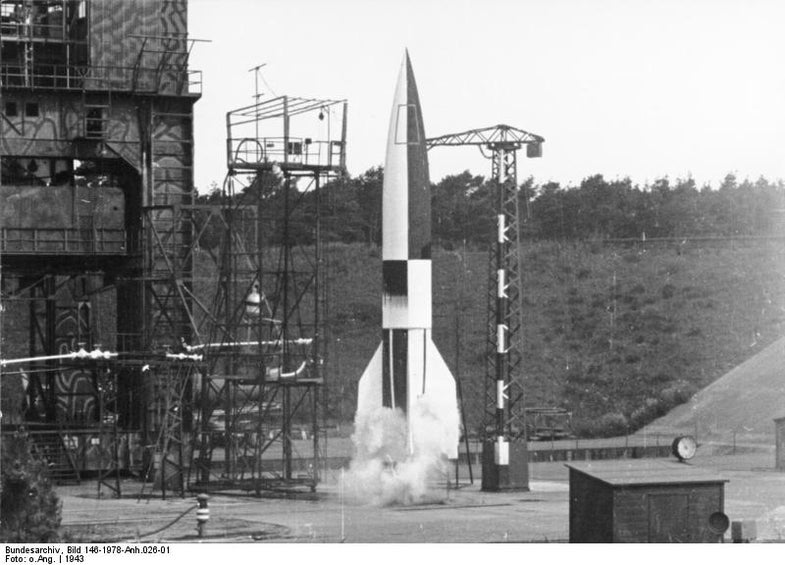 In the 1930s, at a remote site called Peenemünde in the north of Germany on the Baltic Sea, a team of rocket engineers working for the Army developed history’s first viable liquid fueled rocket. The A-4, better known by its Nazi-given moniker as the V-2, was a technological marvel that never became the game changing weapon Hitler hoped it would be. Throughout its development the V-2 was beset by technical and political problems, least known of which might be that technicians kept drinking the ethyl alcohol that was needed to fuel the rockets. 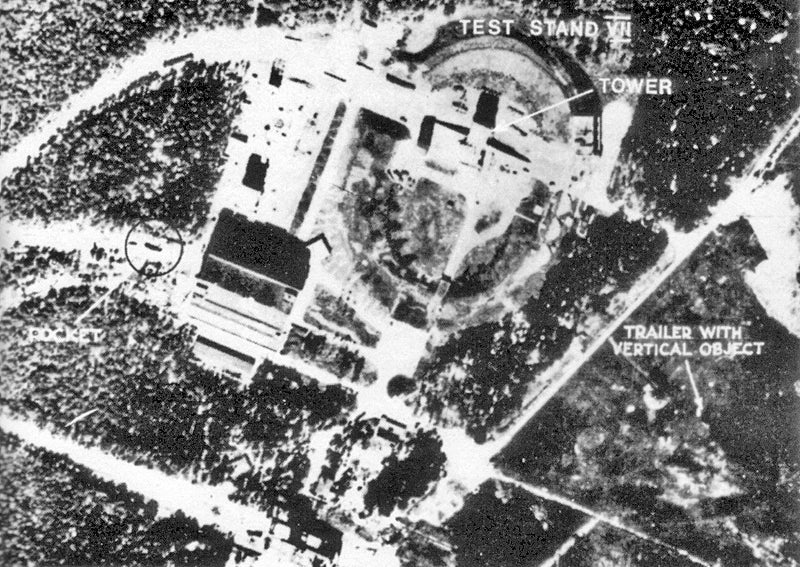 Pennemünde as seen from the air by the British Air Force

The V-2 was a small rocket by modern standards. A little more than 45 feet from nose to fins, five-and-a-half feet in diameter, and weighed about 27,000 pounds, it’s payload was a 2,200 pound warhead designed to detonate on impact. It’s engine was a technical masterpiece of its time. High-speed pumps forced large volumes of fuel into the thrust chamber such that the engine produced 56,000 pounds of thrust. This translated into a range of about 220 miles, a maximum altitude between 50 and 60 miles, and a top speed of 3,400 miles per hour. The V-2 broke the sound barrier not long after launch meaning that when it reached its target city — it was launched on London, Antwerp, Liege, Brussels, Paris, and Luxembourg — citizens never heard it coming. They heard the explosion, then they heard the delayed sonic boom.

But before the V-2 was launched as a weapon, Dornberger’s team with Wernher von Braun at its head worked out all the technical kinks at Peenemüde. Researchers and technicians honed the rocket’s aerodynamic design, developed and built its guidance system, and perfected the engine that used ethyl alcohol and water as fuel.

Any loss of fuel had to be reported to Dornberger, and there was fuel loss, enough that it became a matter of concern. Technicians said it was inevitable; the ethyl alcohol evaporated or was spilled. But Dornberger knew better. Ethyl alcohol is the same kind that makes beer, wine, and spirits alcoholic. It seems technicians around Peenemünde were funneling off a little V-2 fuel for their own enjoyment. At the time, resources were tight. The rocket team didn’t have a lot of financial support and spare materials didn’t exist. He had to find a way to stop the fuel pilfering.

The first solution was to simply add an unhealthy pink dye to the mixture, but it didn’t work. Within a week Peenemünde’s rocket scientists had figure out that filtering the dyed ethyl alcohol through an ordinary potato removed the dye and left them with schnapps.

A second solution came from Karl Heimburg, one of the engineers working at Peenemünde: add a “purgative” to the alcohol. The effects of this should have been anticipated. Launch tests were delayed by technicians taking frequent trips to the bathroom, and so many men called in sick some launches didn’t look like they would happen at all. 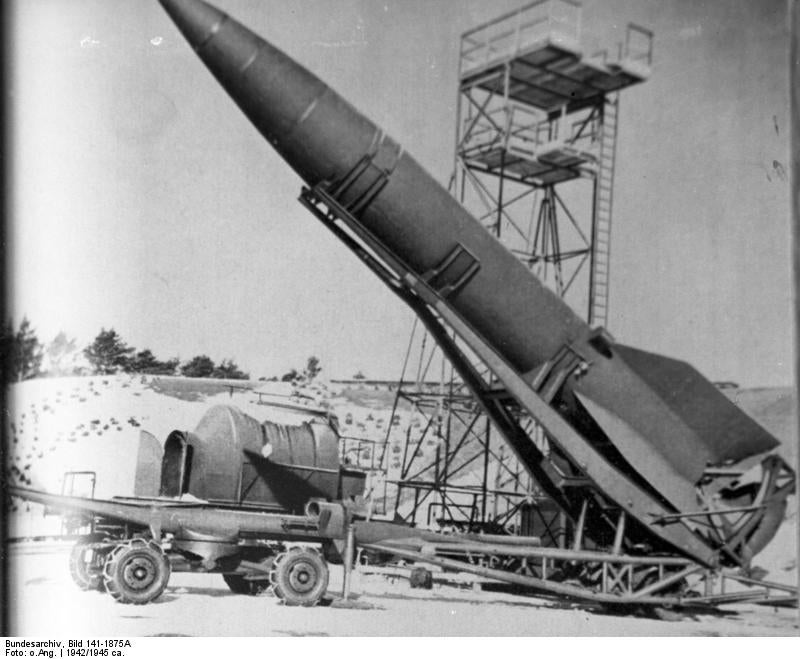 Methyl alcohol was finally cut into the fuel mixture, and again brought foreseeable results. One man lost his sight and another lost his life.

As the war wore on, the demand for alcohol increased as resources became sparse. Allied bombings destroyed facilities and potato crops couldn’t keep up with the need for alcohol production. The state alcohol control and distribution board as well as the Nazi Party headquartered near Peenemünde at Swinemünde eventually caught wind of the consumption going on at the rocket facility and threatened to get involved. Dornberger was keen to keep a healthy distance between the Nazis and his rocket program and Heimburg stepped in to scare off the SS. He suggested a good deterrent to pilfering alcohol would be to hang the dead employees body where all the workers could see it. He wasn’t serious, but the creepy threat kept the Nazis out of doing at Peenemünde as far as the rocket fuel was concerned.

So apparently there are some situations in which humans can consume rocket fuel. A former engineer from Peenemünde estimated that the alcohol content in one rocket was about the same as 66,130 dry martinis. That’s more than enough alcohol to help the thousands of workers blow off a little steam.

Source: “The Rocket Team” by Frederick Ordway and Mitchell Sharpe. And for more on the V-2, check out: National Museum of US Air Force; V-2 Rocket.