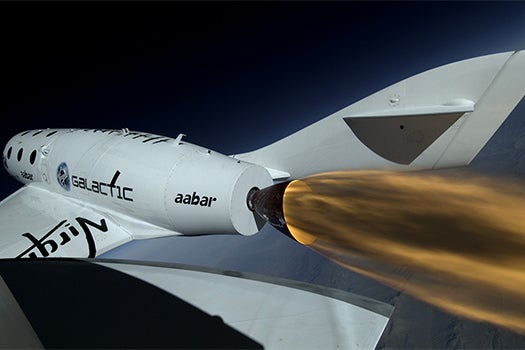 Spaceliner Virgin Galactic dropped a spaceship into the sky above the Mojave Desert this morning and — for the first time — ignited the spacecraft’s hybrid rocket engine in midair.

Until now, SpaceShipTwo, as the spacecraft is called, has never flown on its own power. The previous 25 test flights involved some variation of towing the craft into the air under a mothership, releasing the spaceship, and having a pilot glide it back to Earth.

Rockets are devilishly complex devices that are prone to failure. Igniting one attached to a spacecraft with pilots inside, and having it work as designed, is a major feat. No suborbital space tourism company hoping to launch passengers had achieved this until today.

Virgin Galactic announced a 10am EDT runway takeoff of their mothership, called WhiteKnightTwo, via Twitter. Then, about an hour later, @virgingalactic broke more good news: “For the 1st time ever, [SpaceShipTwo] has lit her rocket engine in flight! A major milestone in human spaceflight,” followed shortly by, “Pilots Stucky and Alsbury confirm: SpaceShipTwo exceeded the speed of sound on today’s flight!”

The test comes just a couple of weeks after Virgin Galactic blew a high-pressure jet of cold oxidizer through SpaceShipTwo’s rubber-fueled hybrid rocket — one of the final trials before actually firing it. Last week Sir Richard Branson, who owns the company, hinted about today’s powered test flight, but didn’t specify a date or time.

But Branson didn’t hold back in glowing about the event this morning. “The first powered flight of Virgin Spaceship Enterprise was without any doubt, our single most important flight test to date,” he said via a press release. “Today’s supersonic success opens the way for a rapid expansion of the spaceship’s powered flight envelope, with a very realistic goal of full space flight by the year’s end.”

The news of an earnest spaceshot by the end of 2013 will surely be music to the ears of about 550 customers — including Stephen Hawking — who have signed up for $200,000-a-seat tickets to fly aboard Branson’s spaceliner. Still, Virgin Galactic remains mum about announcing a start date for their commercial spaceflights. The reason is because they want to prove the system works as designed, over and over again, before popping passengers inside.

If and when flights do begin, the first customers will head to Virgin Galactic’s Mojave-based spaceport and climb into SpaceShipTwo, itself latched underneath the twin-body WhiteKnightTwo mothership. From there the two-part system will fly to about 50,000 feet — at which point WhiteKnightTwo will unlatch SpaceShipTwo, and two crewmembers will ignite the spacecraft’s hybrid rocket system.

Minutes later, the crew and six passengers will reach about 68 miles high — well beyond the unofficial boundary of Earth’s atmosphere and space (about 62 miles up, called the Karman Line). Passengers will enjoy an unobstructed view of the curve of Earth meeting the black of space, along with six minutes of zero-gravity. Then they’ll glide back to Earth and land on a runway.

Today’s test was not an attempt at suborbital space, but rather a dry run. SpaceShipTwo’s rocket burned through fuel for about 16 seconds today, hitting a top speed of Mach 1.2. The speed propelled SpaceShipTwo to an altitude of about 56,000 feet before reaching the ground 10 minutes later.

Branson founded Virgin Galactic in 2004 after aerospace engineer Burt Rutan (backed by billionaire Paul Allen) won the Ansari X Prize — a $10 million contest for achieving two suborbital spaceflights twice in a week — with WhiteKnight and SpaceShipOne (the predecessors of Virgin Galactic’s machines). The company is one of several vying for a piece of a suborbital space tourism industry valued at about $1.5 billion over the next decade. 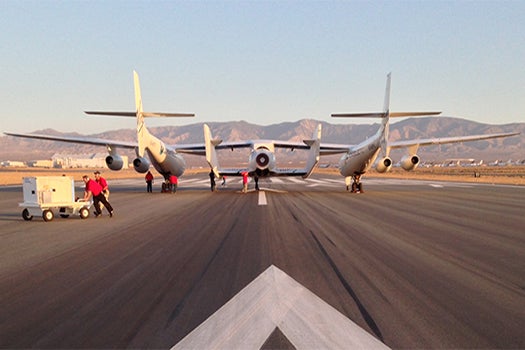 Spacecraft on the runway

WhiteKnightTwo and SpaceShipOne on the runway prior to Virgin Galactic’s first rocket-powered spaceflight on April 29, 2013. 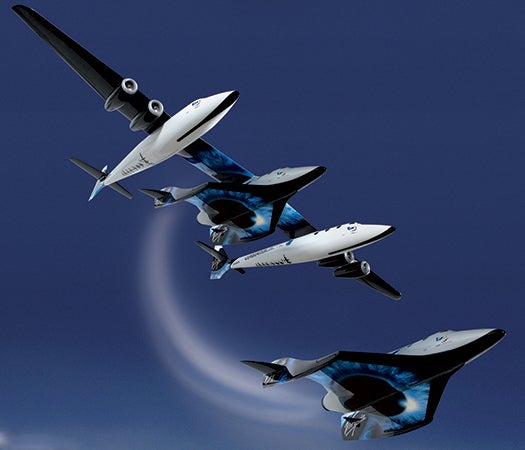 An illustration of Virgin Galactic’s SpaceShipTwo separating from its mothership, WhiteKnightTwo. 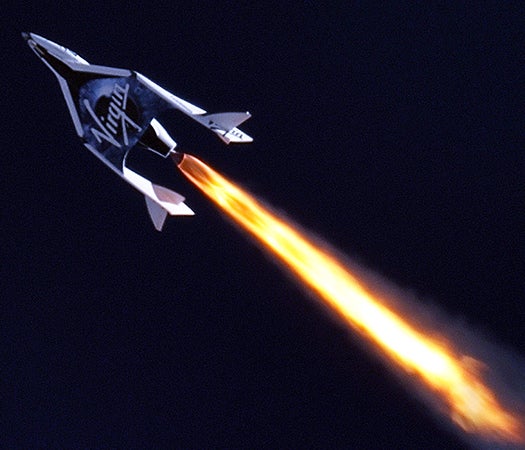 Virgin Galactic’s SpaceShipTwo rocketing above the Mojave Desert on April 29, 2013.