Under The Microscope, Food Has A Big Personality 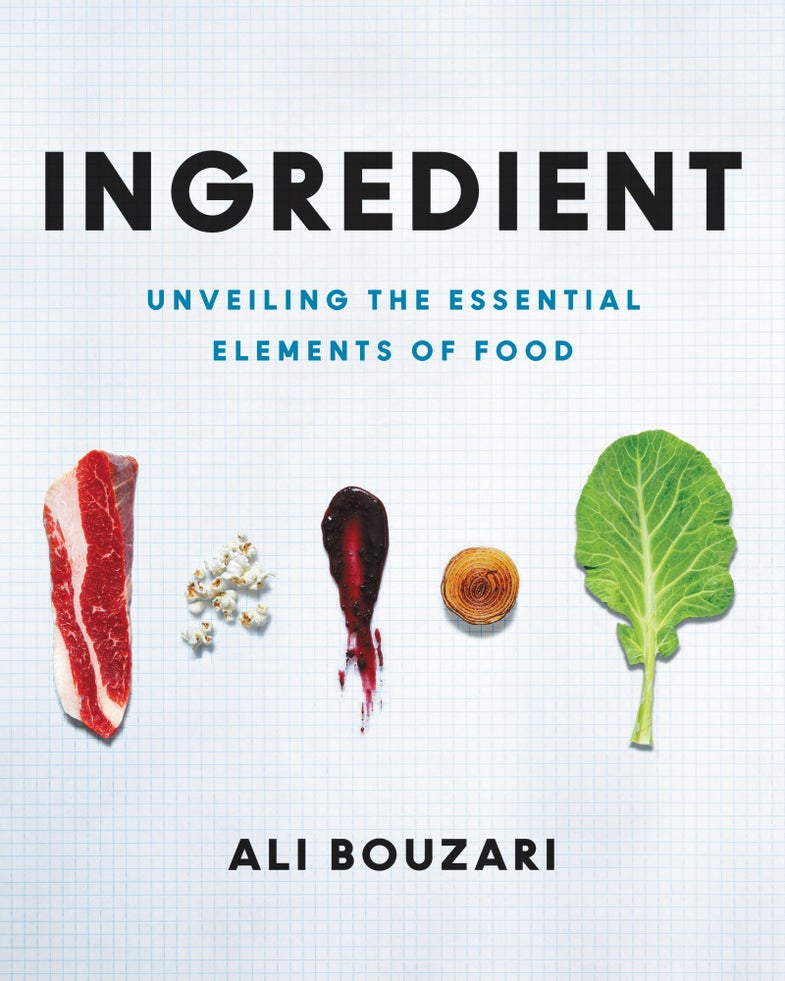 Not long ago, I found myself in Copenhagen, lunching at one of the austere temples of gastronomy that have recently come to haunt that harbor city. The waiter presented a raku bowl arrayed with delectable morsels, reverently introducing the course as “gently cooked” cod with burnt wood oil and flowers gathered from the garden. My dining companion raised an eyebrow at “gently.” Another instance of the pomposity that seems to attend this admittedly glorious cuisine?

“On the contrary,” I explained. “In raw fish, the proteins are all folded up, like this.” I twisted my arms together in an inelegant rendition of the yoga pose known as “eagle.” “A little heat makes the proteins start unfolding” — I unfurled my arms smoothly — “but if you heat them too violently, they can coagulate and rupture” — here I waved my arms in distress, adding, “though sometimes you do want to bust those proteins to bits, for flavor.”

My interpretive tableside dance and lecture on the virtues of gently cooking fish was inspired by the both the tone and content of Ingredient: Unveiling the Essential Elements of Food, Ali Bouzari’s charming new primer on the science of food and cooking.

Since the days of the alchemists, the kitchen has been the household’s main experimental space, a laboratory where base materials (raw ingredients) are transmuted into subtle and delicious concoctions by means of fire, acid, crystals, and other forces and ferments. Chemistry and food are fundamentally and historically entwined, but in recent years, there has been a surge of geeky interest in understanding the science of cooking. Whether you prefer the flash and dazzle of Nathan Myhrvold’s Modernist Cuisine or the Down East empiricism of Cook’s Illustrated magazine, Dave Arnold’s giddy appropriation of lab centrifuges to engineer the perfect cocktail in Liquid Intelligence or Arielle Johnson’s flavor-fissioning fermentations at Restaurant Noma’s MAD Lab, there is a growing interest in applying scientific knowledge to such worthwhile pursuits as optimizing hamburgers, whipping up home-made cheese whiz, and formulating pickles of phenomenal pungency.

Ingredient is a particularly accessible introduction to this burgeoning genre. Although Bouzari has a PhD in food biochemistry, he generally steers clear of technical language. Instead, he shares his own quirky system for making sense of what happens in food on its journey from the raw to the cooked.

Bouzari preaches a kind of chemical animism — or perhaps it is better to describe his book as food science dramaturgy. The things we eat, he instructs us, are made from Ingredients, with a capital I: water, proteins, carbohydrates, minerals, sugars, gases, lipids, and heat. Each of these Ingredients is endowed with a set of capacities, affinities, aversions, and motivations, which Bouzari snappily profiles in eight animated chapters.

For instance, proteins are “unstable, dynamic, and finicky,” losing their composure and becoming unraveled when subjected to the stress of heat or acids, or to physical abuse like whipping. Diva-like lipids can take the heat, but might have a breakdown if triggered by light and oxygen — and they simply despise water. Stodgy carbs provide structure, stability, and support, slowing down the flow, sometimes coming to pieces as sugars, which not only sweeten, but also brown. Heat makes things happen and sets the tempo. And so forth.

In this way, Bouzari describes the major processes of cooking — thickening a sauce, making an emulsion, producing a desirable texture, melting, mixing, browning — in prose that is unfalteringly action-packed.  Some examples: “Proteins are the fuses that light the sugar bombs” during Maillard reactions, shattering both sugars and themselves into “delicious fragments,” accounting for the new aromatic molecules created during browning. When sugar dissolves in water, “a mutual attraction ensues” and “water is spoken for  — it puts all of its energy into the relationship and is less likely to get into any shenanigans with other molecules,” such as forming coarse crystals during freezing or fueling the growth of microbes. “Emulsifiers are lipid chaperones, preventing droplets from getting inappropriately close.”

If you understand each of the Ingredients’ personalities and how they interact, Bouzari proposes, you can puzzle out what role different ingredients (lowercase i) play in the drama of cooking. (Although Bouzari is careful to note that all ingredients generally comprise a combination of Ingredients, the book closes with a “new pantry,” that correlates Ingredients with the foods that contain “a lot” or “a little” of them.) Recipes stage the relationships among these different players, and by reading a cookbook with an understanding of the various characters and their roles, you can cast the right understudy to replace an absent star. You can also diagnose and fix problems.

Metaphor is a powerful mnemonic device, and Bouzari’s animated style vividly dramatizes processes that may be familiar to us, but whose inner logics remain obscure. Skimming once again through Hervé This’s Molecular Gastronomy: Exploring the Science of Flavor while preparing to write this review, I came across the following statement: “Cooks well know that adding too much flour to a sauce makes it tasteless.” What follows is a discussion of the complex and differential effects on the perceptibility of aroma molecules depending upon their chemical structures, solubility in water, and the viscosity of the solution in which they are suspended.

All very interesting, to be sure, but the whole story became much clearer to me in light of Bouzari’s account of “a tangled forest” of carbohydrate chains, binding aroma and taste molecules until “they can’t escape onto your tongue or float up into your nose, so the flavor feels muted.” (He recommends reversing out of this starchy “black hole of flavor” by using xanthan gum or gellan gum, which provide the thickening texture of starch but less of the aromatic bind.)

Make no mistake, there is a lot of useful practical knowledge to be gleaned from Molecular Gastronomy, but it can be difficult to get the big picture, to derive the general principles from the technical specificities. What This explains, Bouzari illustrates. Which brings me to another point. Ingredient is definitely friendly to visual learners, and each chapter is ably and amply illustrated by Jeff Delierre, whose comically literal renderings of Bouzari’s molecular metaphors add considerably to the book’s appeal. The next time I make a soup, I’m certain I’ll imagine the oily blobs on its surface as lipid barges, carting precious cargo of water-hating aroma and nutrient molecules across a hostile sea. The book also features some stylish, if less informative, food photography by National Geographic’s Jason Jaacks.

This may not be a book for everyone. It is very much an introductory text, and for some more savvy readers, Bouzari’s avoidance of technical language may be irksome. Practicing chemists may cringe, for example, at Bouzari’s description of water as “made of two parts, one acid and one base.” And for readers who are chemistry-shy, I wish that Bouzari had included some sample experiments, try-this-at-home demonstrations that could help bridge the gap between his animated descriptions of Ingredients and how to do cool things with them in the real world.

Is there a food science book that is actually for everyone? Yes. Yes, there is: Harold McGee’s magisterial On Food and Cooking: The Science and Lore of the Kitchen. This is a marvel of a book, where a reader in search of some practical advice on souffle-making, may, on the way, encounter passages from Italo Calvino, Apicius, or the Koran, alongside a discussion of the qualities and chemistry of “ropy Scandinavian milks,” or find out about Charlemagne’s cheese-eating habits, or that “an egg is the sun’s light refracted into life,” or that the enzymes that cause chopped fruits and vegetables to turn brown can also help neutralize garlic breath (when phenolic compounds produced by the enzymes combine with stinky sulfhydryl groups, to form odorless molecules), and many other morsels, both trivial and profound. Much later, when you finally arrive at McGee’s lucid passages on the physics of souffles, you feel fortified, but never over-stuffed, with knowledge. On Food and Cooking is generous and playful, scholarly but never didactic, as comprehensive as the world. It is a book that every curious human should own.

Bouzari acknowledges the transformative role that On Food and Cooking played in his own education. Ingredient does not aspire to replace McGee’s essential and enduring classic, nor is it a replacement for more technical texts such as Molecular Gastronomy, or science-inflected cookbooks such as Kenji López-Alt’s The Food Lab. It is a companion to these. For chefs who are trying to grasp what goes on during cooking at the molecular level, it provides an entry point for further exploration. For those already wrist-deep in hydrocolloids and conversant with sous vide, it offers a new, playful way of thinking about food.