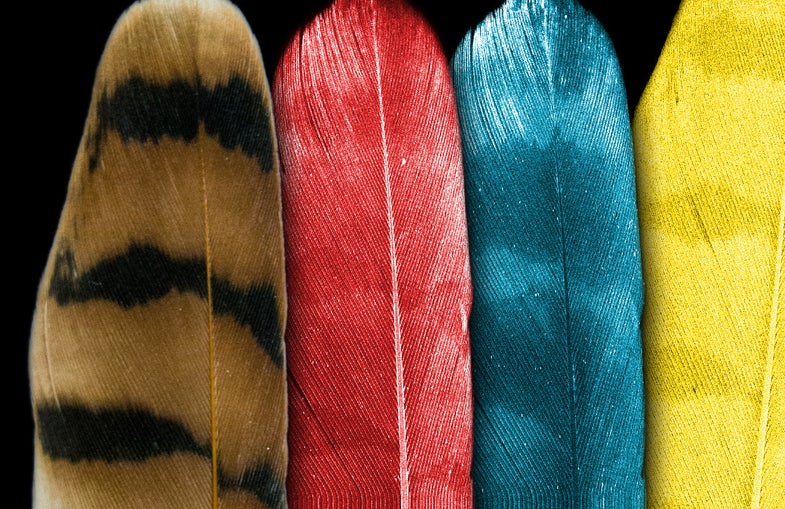 Metals left behind in dinosaur fossils might offer a clue to what colors graced their feathers. Scientists have used x-rays to map the copper, zinc and calcium in feathers from living birds. These metals revealed where the birds were marked with different forms of melanin pigment, the team reported September 23 in the journal Scientific Reports.

“This work on modern animals now provides another chemical ‘key’ for helping us to accurately reconstruct the appearance of long extinct animals,” coauthor Roy Wogelius, of the University of Manchester in England, said in a statement.

Melanin is the dominant pigment in birds and other mammals, and colors our skin, eyes and hair. One type of melanin, called eumelanin, creates a black or dark brown hue. Another, called pheomelanin, is responsible for a reddish or yellow color. Despite its importance, not much is known about how melanin interacts with different elements.

Melanin pigment patterns “almost exclusively” control the distribution of copper, calcium and zinc in feathers, the team saw. Looking at where different elements concentrate may reveal which kind of melanin appears at that point on the feather. In turn, this can be used to decipher the feather’s reddish and dark-hued patterns.

When bonded to sulfur compounds, zinc could indicate that pheomelanin (the red form of the pigment) is present in a feather. When found without sulfur, zinc can indicate the darker type of melanin. Together, this form of zinc, copper and calcium seem to mark the position of eumelanin.

“This not only impacts our fundamental understanding of pigmentation in extant organisms, but also provides a significant contribution to the evidence-based color palette available for reconstructing the appearance of fossil organisms,” the team concluded.

Metals can be preserved in fossils long after melanin-producing structures are destroyed, making them an appealing tool to reconstruct pigment patterns. The colorful findings build on an earlier effort, when the team used copper to figure out where a fossil of Confuciusornis sanctus, a bird that lived 120 million years ago, might have had dark pigmentation.