Europa Is Stunning In Close-To-True Color

Feast your eyes on one of the top candidates for extraterrestrial life. 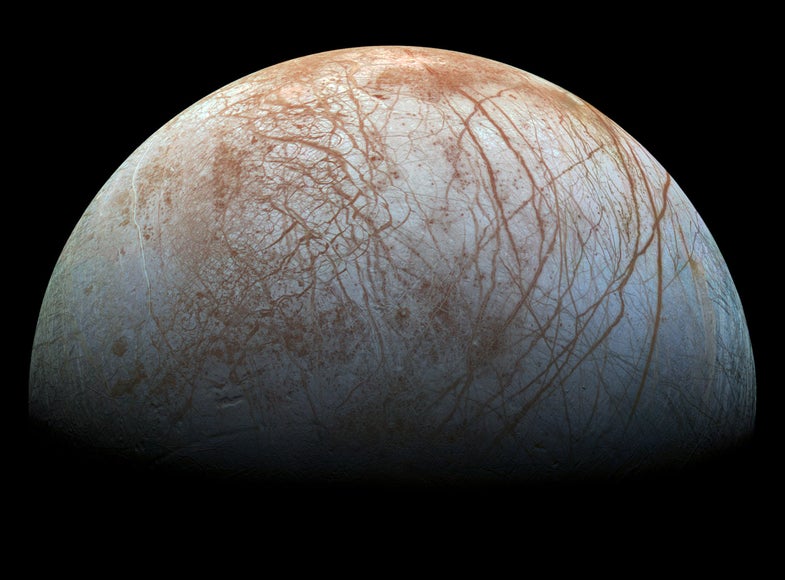 NASA has given an old, high-resolution image of Jupiter’s moon Europa a fresh polish. The result is the closest-yet approximation of what the watery moon would look like to the naked eye. Hi there, Europa!

The Galileo spacecraft gathered the data for this image in 1995 and 1998. NASA released a less naturally colored and lower-resolution version of the image in 2001. Both images show how the moon is covered in water ice, with long reddish cracks running through it. Scientists think the cracks and other reddish-brown regions contain something non-ice, but they’re not sure what.

Europa’s poles are oriented to the left and right in this image, and the poles are a bit bluer. Astronomers think Europa’s ice crystals might be different sizes there than in the middle, where the ice appears whiter.

Underneath all that ice, Europa may have a huge liquid water ocean, perhaps 10 times as deep as Earth’s oceans. Similarly, Europa’s seafloor may have volcanic vents, heated by the energy created as Jupiter’s enormous tidal pull deforms the moon’s core. With potential sources of water and energy, Europa is a top candidate for finding extraterrestrial life.