The three unfortunate males that did not catapult away from mates met their demise. 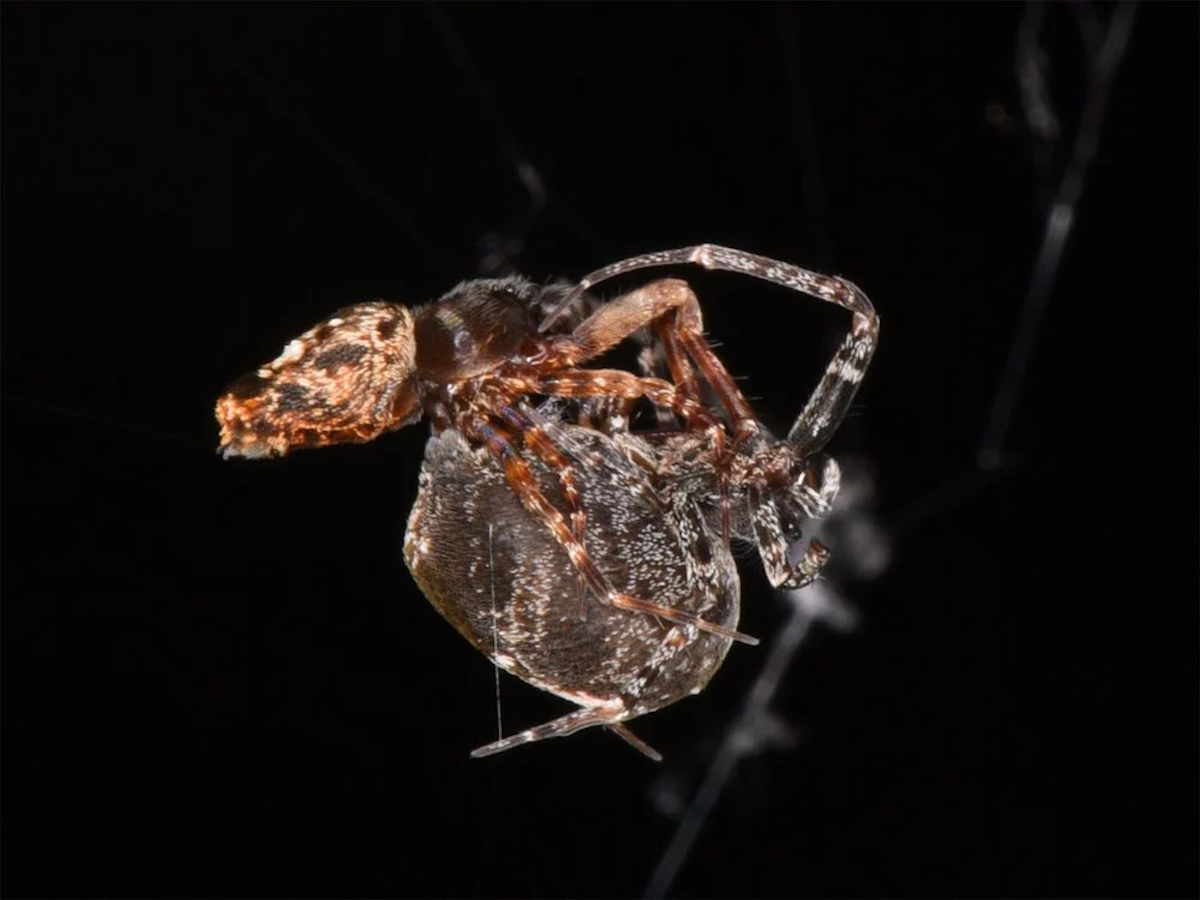 Male orb-weaving spiders risk it all to get intimate with female mates—even their lives. Like a number of spider species, these silk web architects participate in sexual cannibalism, where typically females feast upon male mates or nibble on their appendages during or after sex. But the males of one particular orb-weaving spider species, Philoponella prominens, have evolved a catapulting maneuver that saves them from becoming a post-coital meal. They use their legs to quickly launch their bodies from the clutches of hungry females immediately after the mating deed is done.

This catapulting technique of the species was described for the first time in a study published today in the journal Current Biology.

“By performing these behaviors, male’s risk of sexual cannibalism can be greatly decreased,” Shichang Zhang, study author and arachnologist at Hubei University in Wuhan, China, wrote in an email. Out of 155 matings, Zhang and his team observed 152 males perform the jump after the first mating encounter in the experiment—all 152 survived. The three unfortunate males that did not catapult away from partners met their demise.

The life-saving leap can give the small-bodied males a bit of a fighting chance against the usually stronger, larger females. When the Philoponella prominens spiders mate, males and females entangle in a close embrace, with abdomens facing each other. But, in preparation for their dislodgment, the males fold one of their joints, the tibia-metatarsus joint, in their first pair of legs so that its end tips are curled inward against the female’s body.

“We found that the surface area of the tibia-metatarsus joint in the first pair of legs is significantly larger than that of any other joints,” Zhang said, which “is a little different from leg movement in other spiders, such as the jumping spider.”

The difference can be demonstrated by placing your hand on a wall—your hand acting like the end of a spider’s leg, and the wall acting like a female’s body or other surface, Zhang explained. Facing a wall, press your palm flat against it with your fingers pointing up (like you’re lifting your hand up to look at your nails, or pushing a door open). This positioning is the leg arrangement for most other spiders. But for Philoponella prominens, the back of your hand would be pressed against the wall and pointing down (sort of like the way people bent their hands down for someone to kiss back in the day). When the orb-weaving spiders’ legs extend out from this position, it provides the hydraulic pressure needed to make the split-second spring.

[Related: These male jumping spiders evolved dance moves because the ladies ignore them]

“The male catapults to dodge female’s sexual cannibalism with extraordinary kinetic performance,” said Zhang. He added that the action was so fast that regular cameras couldn’t pick up the details. With an average body length of around three millimeters, males can reach initial catapulting speeds of 82 centimeters per second.

“Imagine a man with a height of [six feet] catapults off [0.3 miles] in one second! That’s what the male spider does,” Zhang said.

Other spider species have evolved a variety of survival strategies to avoid being eaten by their female mates. Several species have been observed sneaking up and mating with females when they are distracted with hunting, feeding, or molting. Other spiders will present silken-wrapped nuptial gifts for females to eat during mating, set their eyes on smaller, immature females that are easier to escape from, or even play dead after sex. However, Zhang and the study authors note that the catapulting maneuver of these arachnid acrobats has not been reported in other spider species.

“Our study revealed a novel strategy about how males counter against female sexual cannibalism, and found that males can use super-fast actions…to escape female’s attack,” Zhang said. Males with superior springing performance and physical capacity might even be able to achieve multiple catapults, which increases their chance of paternity, the study authors write. In other words, the odds of mating again with another partner and having more kids is greater. The new findings in the orb-weaving spider species reveals yet another outcome of sexual conflict between males and females, Zhang said—an intense evolutionary driver in the world of arachnids.