CFC-11 isn't leaving the atmosphere as quickly as it should. 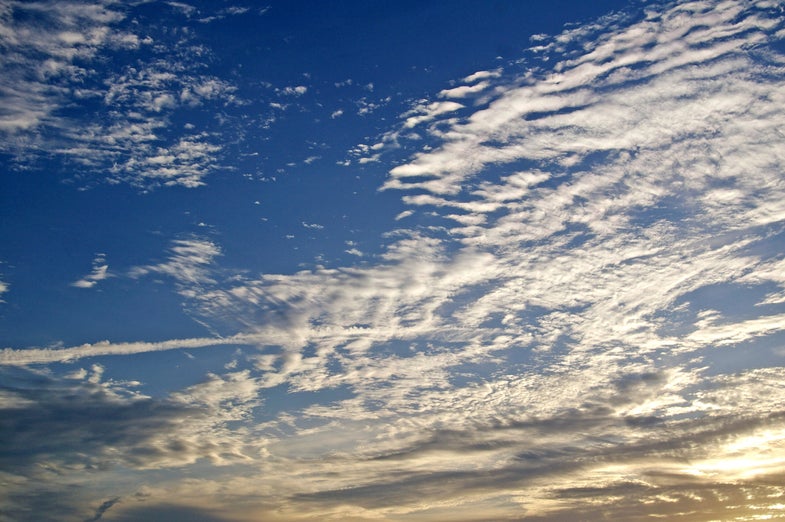 The ozone layer has made an impressive recovery in the last 30 years, but that has never been a foolproof plan. A new study published in the journal Nature on Wednesday illustrates a shocking spike in emissions for an ozone-depleting chemical banned by international treaty decades ago. The culprit who is generating this pollutant is still unknown and at large.

“We were shocked, no doubt,” says Stephen Montzka, a scientist with the National Oceanic and Atmospheric Administration and lead author of the new study. “We couldn’t understand how on Earth emissions would be increasing when production had been zero for so long.”

The chemical, CFC-11, is part of a class of substances called chlorofluorocarbons (CFCs) once hailed as a pinnacle of 20th century industrial chemistry. CFCs showed up in refrigerators, aerosol cans, and solvents of all kind. They were everywhere, like some sort of miracle compound specifically designed for modern consumerism.

Then scientists started realizing that CFCs were widening a gaping hole in the Earth’s ozone layer, an essential shield for life on this planet against the sun’s harmful ultraviolet radiation. CFCs’ chlorine molecules initiate ozone-destroying chemical reactions and allow UV radiation through to the surface. The world came together in 1987 to sign the Montreal Protocol, a pact that effectively banned all ozone-depleting substances, including CFCs. Signed by every nation in the U.N., “the Montreal Protocol is famous for being the world’s most successful environmental treaty,” says Durwood Zaelke, the founder and president of the Institute for Governance and Sustainable Development. “It’s done more than any other treaty to protect the climate. It’s kept the climate system from disaster.”

That’s part of the reason the new Nature study is so jarring: it’s a clear indication of the treaty’s violation. Whether that’s intentional or accidental is still unclear, but it nevertheless puts the Montreal Protocol’s parties on high alert.

“We’re happy to see this paper come out,” says Susan Strahan, an atmospheric scientist from NASA’s Goddard Space Flight Center, who was not involved with the study. “It appears somebody is not complying with the Montreal Protocol. That’s something we all need to be concerned about, because we want ozone levels to recover.”

CFC-11 was especially used in foam building insulations and appliances made before the 1990s. While CFC-11 is no more dangerous to the ozone layer than other chlorine-containing chemical species, it’s the second-most abundant CFC. It has three chlorine molecules instead of the usual two, conferring it with a longer lifespan—around 52 years—than most other ozone-depleting chemicals. It’s also a greenhouse gas capable of contributing to climate change.

Like other CFCs, concentrations of CFC-11 in the atmosphere have dramatically decreased since the treaty went into effect in 1989, abating by as much as 15 percent since hitting peak levels in 1993. CFC-11 production was supposed to be completely eliminated by 2010.

NOAA scientists have made regular measurements of the air since the late ’70s, as mandated by the Clean Air Act. During those observations, Montzka’s group found that while CFC-11 levels in the atmosphere are still declining, they’re not shrinking as fast as they should. New emissions are slowing that decline down. Emissions have climbed by a staggering 25 percent since 2012.

Many experts, encouraged by how well the world rallied against CFCs, have believed we could go back to 1980 ozone levels between 2050 and 2070. So far, Montzka emphasizes, the new emissions won’t halt or reverse the healing of the ozone layer. “This new enhancement by itself isn’t going to change ozone-depletion by much, or at all.”

However, “what’ll change it significantly is if these emissions were to be sustained in the future. We want to go for quick healing in the ozone layer, so [the damage] doesn’t persist and we don’t suffer that 10-year lag in ozone recovery date that might be realized if these emissions don’t go away.”

Based on an analysis of CFC-11’s interactions with other gases, the researchers believe the source is in eastern Asia—but that’s as narrow as the search beacon cna go. Strahan hopes the new results might persuade NASA to conduct an aircraft mission that flies over the region, “because we can go and measure the stuff in the atmosphere and see if there are higher levels [of CFC-11].”

But it’s baffling that a country would knowingly violate the treaty. “The reason the ozone layer is getting better,” says Strahan, “is because the world is complying with the ban on CFC production. There are plenty of replacement compounds—I don’t know why someone needs CFC-11. That doesn’t really make sense. I don’t have an explanation for that.”

Whoever is producing the new emissions is probably doing so without government oversight of knowledge, says Zaelke. In fact, the chemical spike may simply be the result of poor storage of old insulation of appliances somewhere which are now emitting CFC-11 into the air. Nevertheless, the evidence points strongly to someone creating new CFC-11 emissions. Montzka and his colleagues held off publication of the findings precisely to figure out whether there were alternative causes for this slowed CFC-11 decrease. “Someone is threatening to ruin this great record,” says Zaelke.

That’s not to say there’s a country out there that’s going out of its way to flout the Montreal Protocol. According to Zaelke, the treaty has always worked with a “get well” approach: if a country is non-compliant, then the treaty’s leaders work aggressively with that state’s leaders to return compliance. If a country cannot or refuses to return to compliance, harsh trade sanctions are the next step. But those punitive measures have never been necessary before.

Whether those steps need to be taken or not, Zaelke sounds optimistic that the world, as fractured as it sometimes seems, will act appropriately, given the consequences. “You’ve got a treaty that is not only the hero in this drama, but it’s iconic. The parties will not let it slide out of compliance. If the Montreal Protocol fails, the world will fail. The climate system will fail.”