How modern-day dinosaurs survived the apocalypse

The mother of all birds lived on the ground. 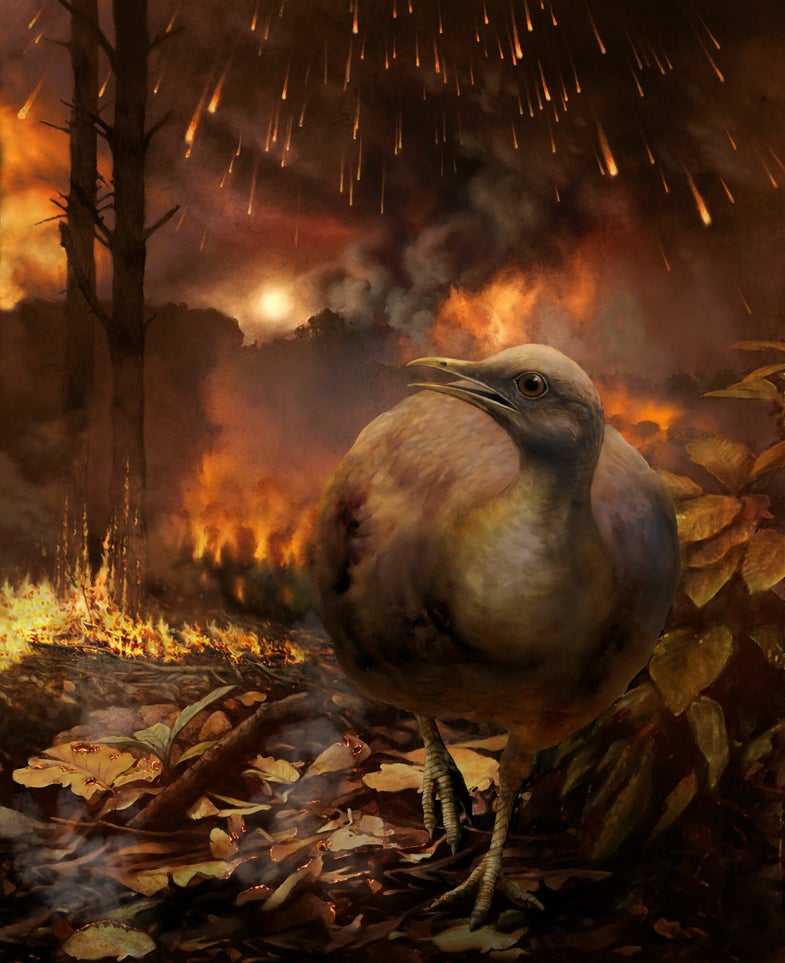 When an asteroid pummeled the earth 66 million years ago, forests burned, molten rock rained over the planet, tsunamis thrashed the coasts, and the sky went dark. Most dinosaurs didn’t outlive the apocalypse that killed off three-quarters of the world’s species, but a few lucky birds survived. These creatures all resided on the ground, according to research published this week in Current Biology.

Because of the near-total global deforestation, tree-dwelling birds didn’t have any place to live, according to the researchers. Only the plucky bunch that conducted their affairs beneath the canopy persisted for future generations, evolving into the nearly 10,000 species that exist today.

“Anytime you have a major change with vegetation, you see big changes in everything downstream,” says Regan Dunn, a paleobotanist at the Field Museum in Chicago and one of the study’s authors. Most scientists agree that the reign of dinosaurs ended with the strike of a massive meteor that affected nearly all of life on the globe. “It happened basically in one instant,” Dunn says. “Life as we know it was set.”

Dunn and her colleagues used microscopic fossils of pollen and spores to reconstruct a timeline of plants covering the earth before and after the asteroid. The researchers combined this pollen record with an evolutionary history of birds to show that only ground-dwelling species survived the extinction event.

“You can see this big spike in fern spores,” says Dunn. “That generally means that something has gone terribly wrong in the ecosystem.” The same pattern happens in disturbed habitats today. Volcanic activity in Hawaii is a good example, says Antoine Bercovici, a pollen expert at the Smithsonian National Museum of Natural History and co-author of the paper. “You see those little fern fiddleheads that peak out of the lava flow,” he says. That’s what happened on a global scale 66 million years ago.

It’s not clear exactly how the asteroid impact annihilated the world’s forests, but there would have a “cacophony of catastrophes,” says Dunn. “It would be have been a horrible day.”

A big wave of energy would have emanated from the impact, leveling trees a thousand miles in every direction “kind of like in an atomic bomb,” according to Dunn. The flaming debris hurtling through the atmosphere may have ignited forest fires across the world. The aftermath of the explosion would have blocked sunlight from reaching the earth, says Bercovici, enveloping the world in a “nuclear winter.”

Before the mass extinction, birds with teeth and clawed fingers dominated the landscape, but none of their descendants are alive today. The lineage of birds that survived mostly lived on the ground because of competition. “They were sidelined in a way,” says Daniel Ksepka, a paleontologist at the Bruce Museum in Connecticut who was not involved with the study. “That turned out to be a very useful thing.”

The tinamou birds of Central and South America may be the closest analog those that made it in the early days after the asteroid, says Daniel Field, an evolutionary paleobiologist from the University of Bath and lead author of the paper. “They look a little like quails,” he says, and are distant relatives of other primitive-looking birds that live on the ground, like ostriches and emus.

Fossil evidence shows that birds moved into trees a few million years after the impact, but the record in the years surrounding the extinction event itself is blank. Field thinks the transition to arboreal life could have happened on the order of hundreds of thousands of years, rather than millions. “We are not talking about the gradual acquisition of diversity,” he says. “We are talking about a really accelerated pace of change.”

His research fills a gap that gets us closer to understanding the evolution of birds by aligning the story of deforestation from the fossil record with genetic evidence.

“This is the first time anyone said it’s all about being terrestrial,” says Ksepka. “It totally makes sense.”