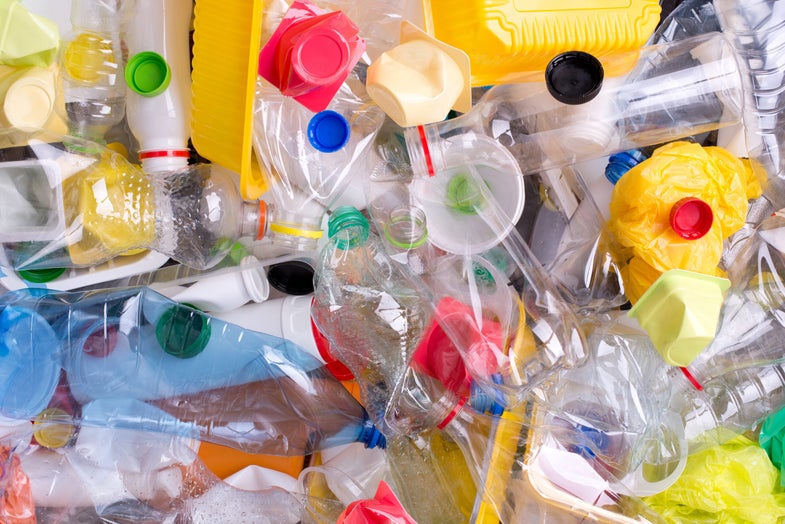 The natural world is rapidly becoming a giant pile of plastic waste. There are literally six—six!—ungodly large garbage patches swelling in the ocean. Even areas as far removed from us as the Arctic are not safe. We’re slowly suffocating a lot of natural ecologies with our trash. Fish, birds, and other animals all unwittingly consume the five trillion tons of plastic (and counting) strewn about the ocean, and doing so can kill them.

Scientist are trying to come up with novel solutions to remedy the plastic pollution crisis, and they’re thinking small—in a good way. In a new study to be published in the Proceedings of of the National Academy of Sciences this week, a team of international scientists illustrate how they created—by accident—a new enzyme capable of breaking down plastic bottles. This providential development could finally allow us to fully recycle plastic drink bottles for the first time ever, putting a much-needed dent in plastic pollution increases.

The new study’s origins are tied to the 2016 discovery of a bacterium in a Japanese waste dump that had evolved to use PET (polyethylene terephthalate), commonly used in the 1 million soft drink bottles sold every minute around the world, as an energy source. The team of scientists originally began running tests to see how the bacterium, Ideonella sakaiensis, managed to produce an enzyme capable of degrading PET. Those tests, it turned out, inadvertantly made the enzyme, PETase, even better at degrading PET. The resulting mutant PETase now takes just a few days to break down PET, compared to the 450 years it takes for the stuff to degrade naturally.

The salient takeaway is to use PETase to break down bottles before they end up in the environment. However, the enzyme could also augment plastics recycling approaches themselves. “Current recycling strategies for PET bottles mostly focus on mechanical recycling, so they chop the bottles up and use them for applications that typically do not need the same materials requirements as bottles,” says study co-author Gregg Beckham, a researcher at the U.S. Department of Energy’s National Renewable Energy Laboratory. “Engineered enzymes that break PET down to its building blocks would enable the ability to do full bottle-to-bottle recycling,” which would hopefully help decrease oil drilling demands for new plastic production.

After characterizing the structure of the enzyme by bludgeoning it with x-rays from the UK’s Diamond Light Source, which can hit objects with beams 10 billion times brighter than the Sun and help scientists distinguish individual atoms from one another, the team changed the structure of PETase slightly in order to compare it to another enzyme which breaks down cutin (a polymer found in the protective coating in plants). That process unexpectedly conferred PETase with a 20-percent improvement in degrading PET.

This is not exactly a radical shift from the original, but it does augur the potential to go further and turn the enzyme into something with real, significant applications. Beckham and his team have already filed a patent with the hopes of making the enzyme stable and active at temperatures above 158 degrees Fahrenheit, where PET becomes rubbery and breaks down 10 to 100 times faster.

“Akin to laundry detergent, which contains many enzymes that are produced at the industrial scale to clean our clothes, one could envision a PET-degrading enzyme system that is able to take PET bottles in a large industrial reactor with hot water and break the bottles down rapidly to their building block constituents,” says Beckham. “Many groups around the world are working towards this goal now, and I anticipate that this will be a reality in the next decade or, hopefully, much sooner.”

The original Ideonella sakaiensis bacterium is far from the first living species to possess plastic-eating proclivities. Waxworm caterpillars have been found to break down plastic in a matter of hours, and mealworms possess gut microbes that eat through polystyrene. Beckham thinks, given how ubiquitous environmental pollution has become, “it is likely that microbes are evolving faster and better strategies to break down man-made plastics. It seems that nature is evolving solutions.”

Surely humans could stand to evolve some solutions as well.