It's as if eating an undercooked hamburger could transform a human hardcore partier into a hermit. 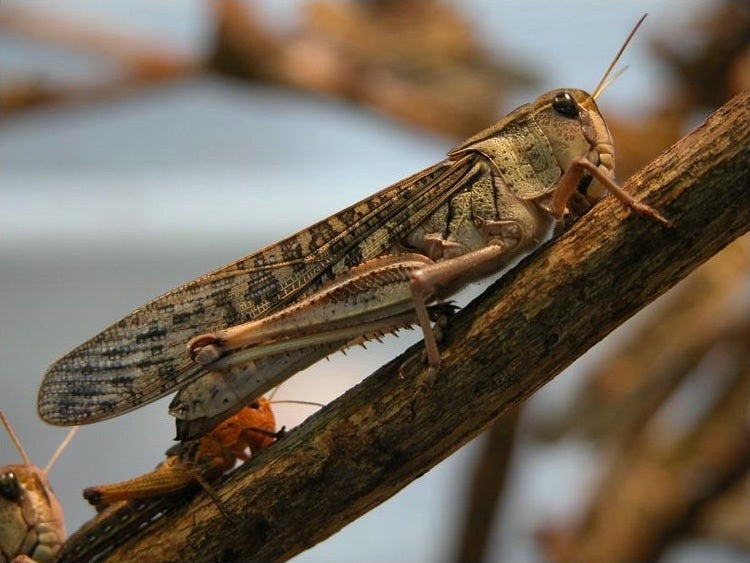 The difference between a locust and a grasshopper is at once great and maybe much, much less than you’d think. I’ll let this Aeon magazine article explain:

Whoa. Creepy. And what could drive these changes? Aeon reports on how the grasshopper/locust transformation happens at a genetic level. Now a new study checks out a different level of trigger. It turns out that one Asian species of locust, Locusta migratoria manilensis, morphs into a benign grasshopper after getting infected by a parasite called Paranosema locustae. At a human level, it’d be as if eating a pathogen-infected undercooked burger transformed you from a cosmopolitan party animal into Henry David Thoreau.

That said, maybe the idea of bug-wrought changes isn’t so strange. Consider the protozoan, carried in cat poop, that some researchers think may make infected people slightly more outgoing and risk-taking. In addition, P. locustae affect locusts’ gut microbes, which scientists know is important to overall health. In humans and lab rats, alterations to the gut microbiome have been linked with physical conditions, such as obesity, as well as personality traits.

In a series of experiments, a team of entomologists and biologists from China and the U.S. showed that getting a P. locustae infection reduces the numbers of a certain bacterium in locusts’ guts. (This is a common phenomenon, where one bodily critter reduces the numbers of another one.) Those same gut bacteria make a pheromone that tells grasshoppers to gather together in large aggregations, so the infection dials down those chemical signals. Locusts that sense less pheromone from other locusts respond dramatically. They produce less serotonin and dopamine, nervous-system chemicals that work to maintain locust swarms. Effects on these chemicals are thought to be the mechanism behind gut microbes’ effects on human behavior, too.

Why should P. locustae infections turn gregarious locusts into solitary grasshoppers? The changes don’t benefit the parasite, which spreads through “cannibalism of infected dying insects” and “fecal contamination,” among other ways. (Delightful!) Instead, it seems locusts’ response to getting infected evolved for their own protection. They avoid each other, and thus avoid spreading the plague.

The locust-studying team published its work today in the Proceedings of the National Academy of Sciences.