You can really taste those fluorescent proteins. 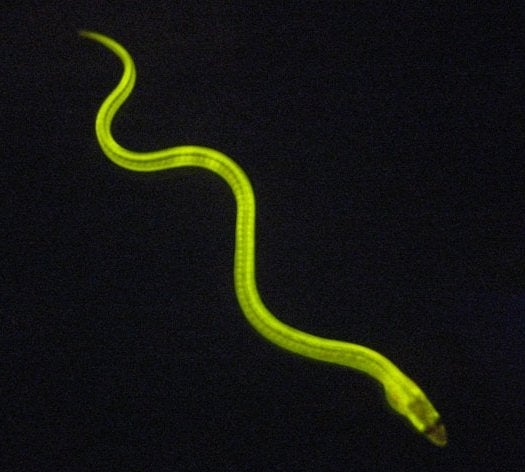 There are many animals that display fluorescence. They have proteins in their tissue that glow when hit with light. But they’re all invertebrates like jellyfish and coral polyps–at least, that’s what we thought, until 2009, when a pair of Japanese chemists noticed something very odd going on with a very common fish. And now they’ve figured out what exactly is causing it.

The Japanese eel, Anguilla japonica, a freshwater species, is known as unagi in Japan, where it’s an extremely common ingredient in the cuisine. It’s grilled, served in sushi, and given many more preparations. The chemists, who primarily study food, were investigating how light interacts with the oily flesh of the eel, and noticed something odd: when hit with a blue light, the eel positively glows.

In a paper in the current issue of Nature the researchers describe how they isolated and identified the specific protein responsible for the fluorescence. After examining it, they noticed that it’s very different from the proteins that cause fluorescence in other lifeforms. It shines brightly even with low oxygen levels, for one thing, and it also requires a substance called bilirubin, which is found in bile.

Those difference make the researchers think the protein could be used in medicine; fluorescent proteins are often used on humans to track proteins, almost like a tag.

The best part? The researchers named the protein UnaG. Get it?