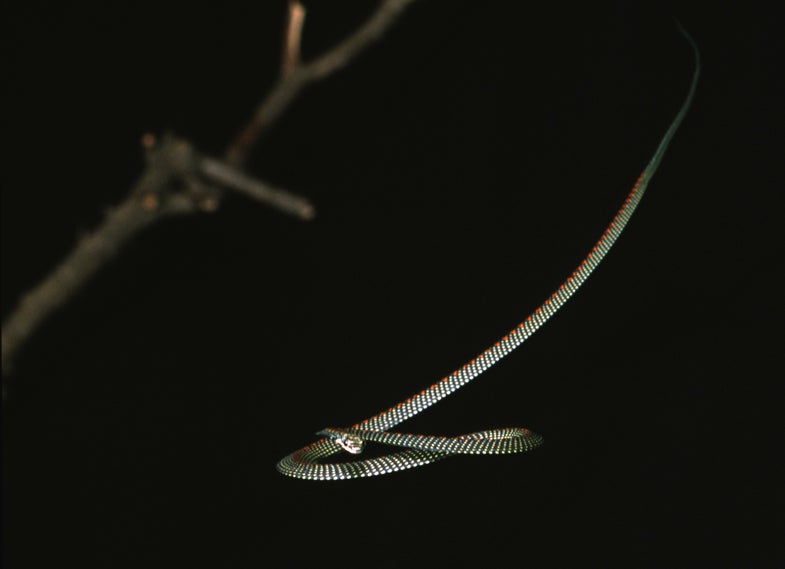 Snakes don’t always fly, but when they do, they glide with a grace unparalleled in the animal kingdom. Tree snakes in the species Chrysopelea paradisi undulate side to side as they soar downward from branches — fall would be too inelegant a word — and land 100 feet away. As these flying snakes twist and turn, they also flatten their bodies, curling inward from the bottom. This unique combo of moves and morphing gives them the power of controlled gliding flight, like swimming through the air.

Jake Socha and his colleagues figured out how they do it by building a 3-D snake model, running lots of simulations, and growing sensitized to three-foot snakes leaping into the air around them.

Socha, an assistant professor and biomechanist at Virginia Tech, showed a few years ago that these flying snakes move their cord-like bodies in two ways simultaneously as they fly. They wriggle like a whip, possibly using the same muscles they would use to slither on the ground. And they flatten their bottoms, which Socha thinks they achieve by extending muscles along their entire bodies, kind of like how a cobra hoods by splaying its ribs.

Either way, this bottom-flattening makes the snakes resemble a gumdrop (or Darth Vader head, or jellyfish bell, or Grimace). Socha explains it this way: “Imagine you took your snake, which is just a long cylinder, and you virtually cut it in cross sections. You chop it in half and look at it end-on. Once you get past all the blood and guts and stuff like that and look at the shape, it is like a circle, it’s round. But in the air, it takes on a triangular shape. It has two little edges that point downward on the bottom; it’s almost concave.”

Compared to very efficient flying things, like the streamlined leading edge of an airplane’s airfoil, this doesn’t seem very aerodynamic. But it’s surprisingly so, Socha and his colleagues found. The snake’s entire body takes on this shape, which enables its whole body to generate lift. The snake is now a wing. This video demonstrates how well it works:

The team wanted to figure out the snake’s lift coefficient and other properties of aerodynamics. But they couldn’t exactly drop snakes into a wind tunnel, so they used a 3-D printer to create a flight-configuration-shaped plastic rod, which they then tested in a water tank with lasers. Sensors on the model reported the forces of water flowing around the rod, which served as a proxy for air flowing around a flying snake.

In repeated tests, they tilted it at varying angles of attack from -10 to 60 degrees. Angle of attack works like this: If you put your hand out a moving car’s window and hold it flat into the wind, your angle of attack is zero. Hold it up like you’re saying STOP, and that’s a 90-degree angle of attack (a bad place to be for creating lift). Throughout the model snake’s journey of tilting, the team found a 35-degree tilt created the most lift — but the flying snake creates lift even at extreme angles.

“We think that helps to explain how it goes through its trajectory. When it jumps out, it is mostly falling, and it’s going down at a steep angle — but despite that, it can generate lift,” Socha says. “We weren’t surprised that it produced a little bit of lift, but we were surprised it did so well.”

Across more than a decade of work with flying snakes, Socha has observed C. paradisi flying out of trees in zoos and in the wild. He has worked with some of its close relatives, but they don’t flatten out in the air the way this species does. That configuration may have to do with why they’re such good fliers.

Socha has about 20 tree snakes in his lab, and next he wants to study their three-dimensional flight envelope, including how their undulating waves come into play. All this could come in handy for robotics designers, too, he notes.

“If you could make a robotic snake that was able to do cool snake-robot things, like wrap around poles and climb up them, or get in small spaces between rubble, it would be neat if you could also make that same robot fly through the air,” he says.

The paper appears in the Journal of Experimental Biology. 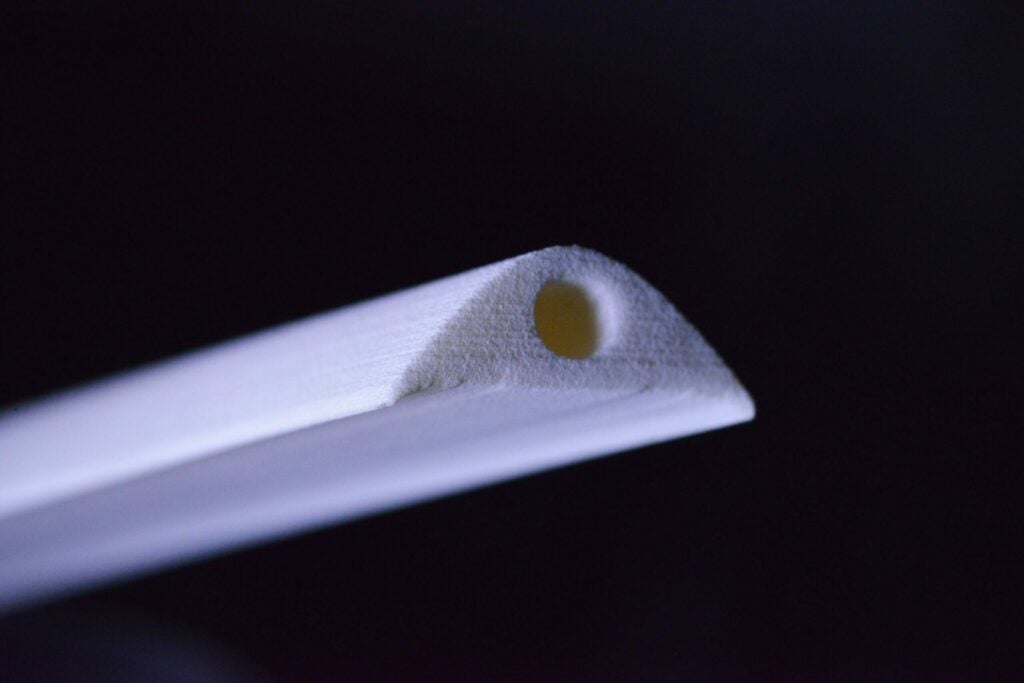 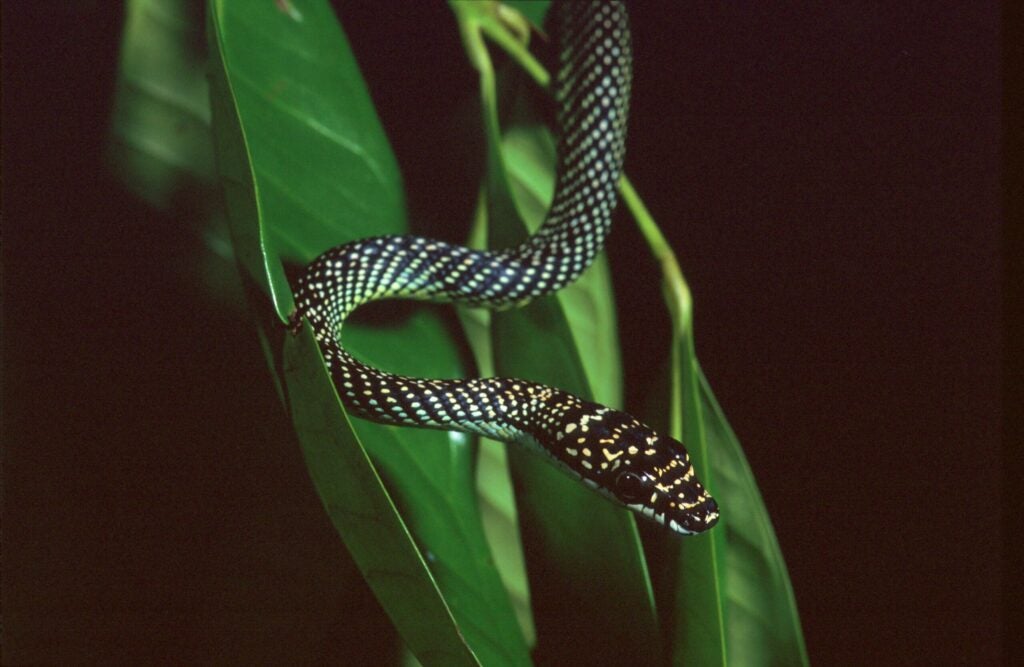 C. paradisi on a leaf 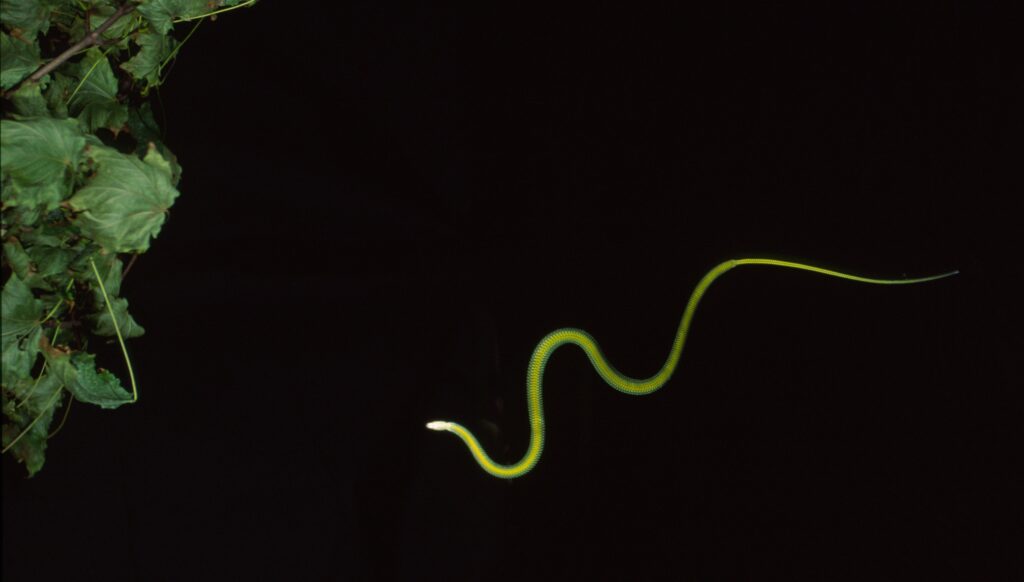 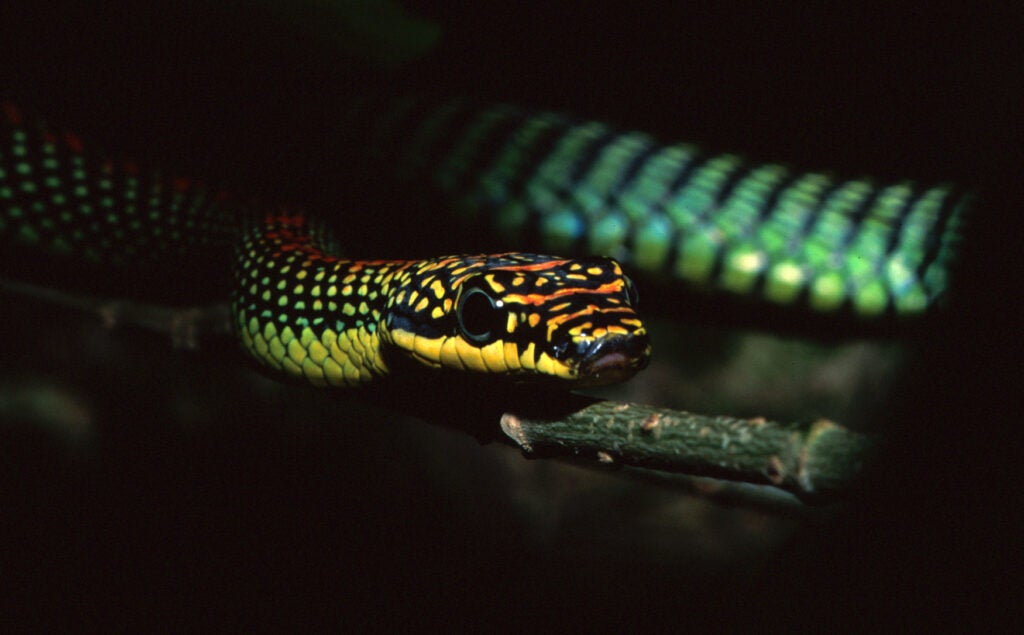 Snake on a Branch

Flying snakes leap from tree branches into the air. Their motion is deliberate, suggesting they are capable of controlled flight. 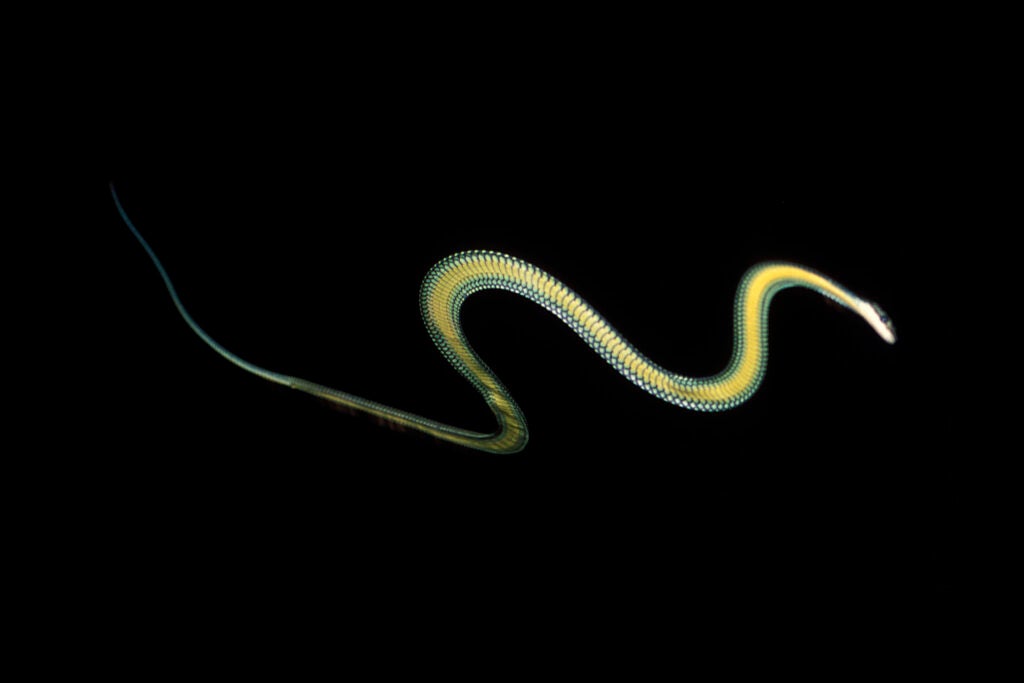 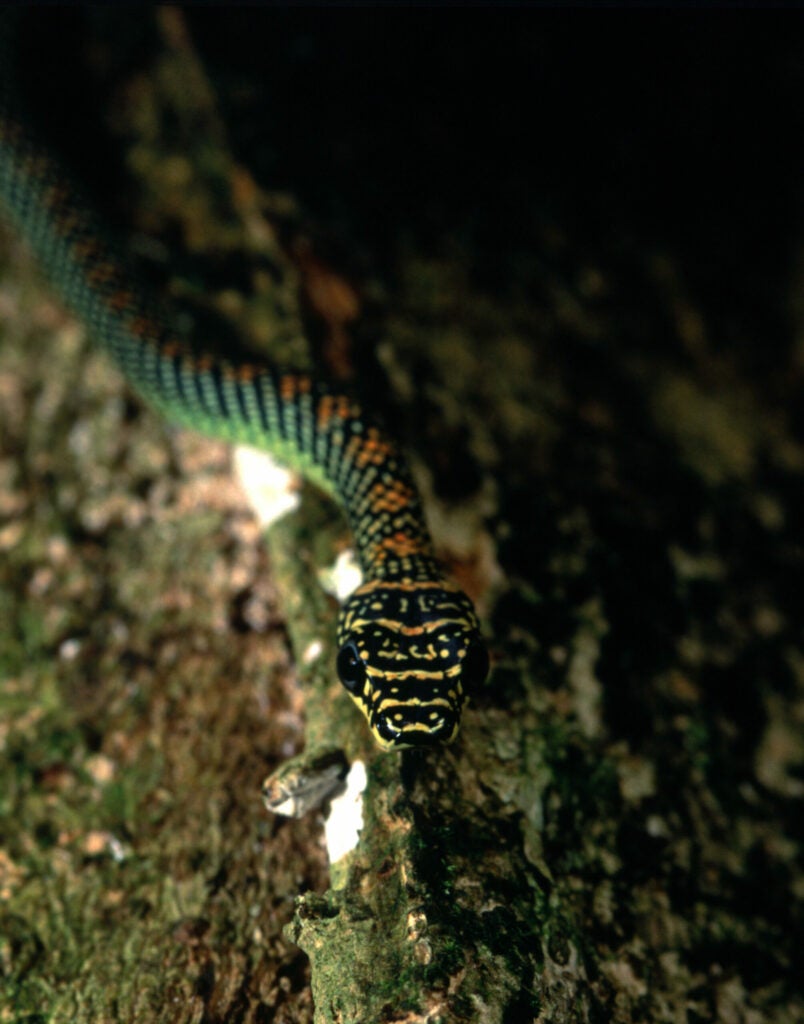 Up Close and Personal

Tree snakes from the genus Chrysopelea are venomous and constrict their prey. They mostly eat lizards and bats.
Animals