Happy birthday to the best space telescope ever! Love, PopSci. 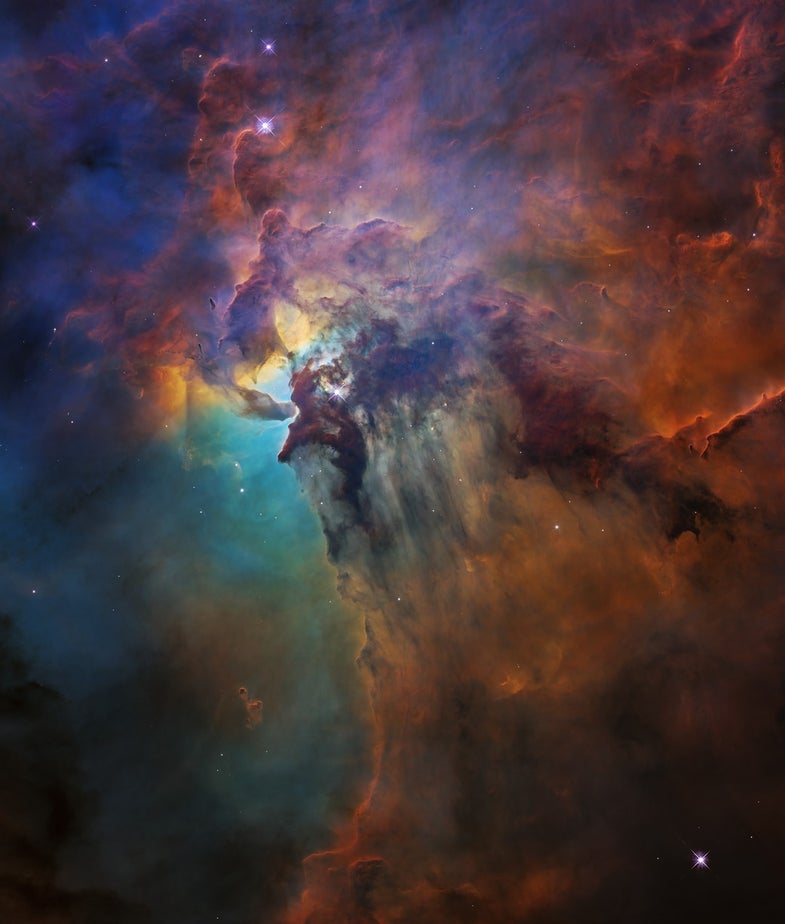 On a clear summer night in the northern hemisphere you can go out to your backyard with a pair of binoculars and look towards the constellation Sagittarius, and you just might see a smudge in the night sky. That’s the Lagoon Nebula, also known as Messier 8, a stellar nursery about 5,000 light years away from us here on Earth.

It’s pretty amazing, even with low-tech binoculars or higher-tech telescopes. But to really appreciate the scale of the nebula, check out this new view just released by NASA to celebrate Hubble’s birthday.

In the middle of the image is a bright young star, only a million years old, called Herschel 36. It’s 200,000 times brighter than the Sun and is going through a bit of a tumultuous phase, emitting massive amounts of radiation and swift stellar winds. The entire picture is about 4 light years across.

The above image (and the image below left) was taken by the telescope in visible light, but on the right you can see a comparison of the same view but in infrared.

In infrared, more stars are visible, both within and without the nebula. But there are still some spots that Hubble can’t quite see. See those dark dusty patches? Those are Bok globules, places where dust and other matter is coalescing into stars and planets. While Hubble’s instrument can’t see through these, the James Webb Space Telescope should be able to peer inside—once it launches.

And just as a bonus throwback, here’s how Hubble captured the Lagoon nebula in 1996

The space shuttle Discovery deployed Hubble 28 years ago today. The Hubble underwent multiple repairs earlier in its lifetime, to upgrade and fix equipment, but the last repair mission to the Hubble occurred in 2009—eventually it will perish. But until then, the telescope will continue to show us incredible views of space, from distant galaxies from the early Universe, to stars blowing bubbles and stellar ‘fireworks’ displays. Happy Birthday Hubble! Here’s hoping for many more.