Apollo astronauts had a lot to do during their relatively short stays on the Moon. To make sure they didn’t... 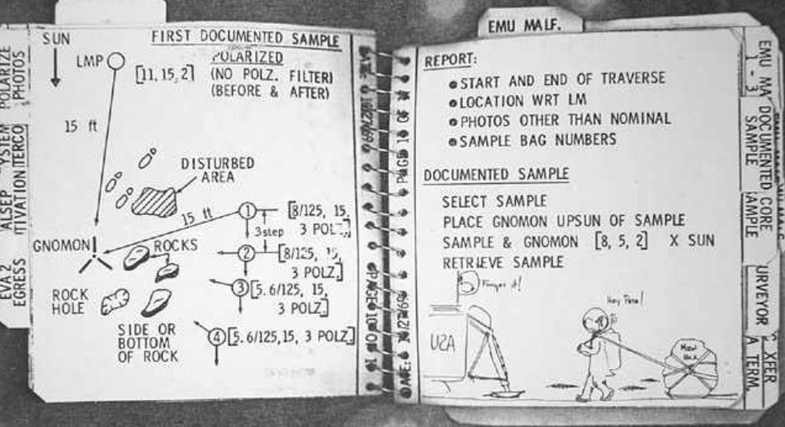 Apollo astronauts had a lot to do during their relatively short stays on the Moon. To make sure they didn’t miss any mission objectives, NASA sent them up with easily accessible checklists. The wrist checklists were made of three and a half inch square pages held together with a metal spiral binding. They were work outside the lunar EVA suits, attached with a strap, so they were quite literally on hand. They were basically a cheat sheet of everything that had to happen during a Moonwalk, right down to a glossary of lunar geology terms. And more often than not, backup crews would sneak some practical jokes into these lunar aids.

It fell to Apollo 12’s back up crew, Dave Scott, Jim Irwin, and Al Worden, to put together the checklists for their colleagues. And because the prime crew didn’t train with their flight hardware — and that included the cuff checklist — the Moonwalkers didn’t see what the backup crew had done until they were stepping out on the Ocean of Storms. 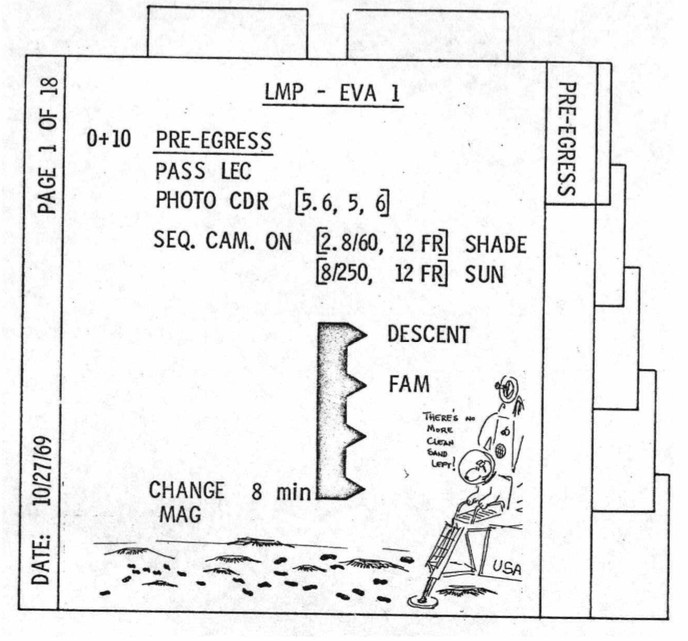 When Apollo 12’s Pete Conrad and Al Bean stepped out onto the Moon, they found their surface activities were illustrated by talking dogs in helmets. Bean’s checklist also contained a number of things for him to watch out for while he and Conrad traversed the lunar landscape. At one point, Bean’s checklist urged him to pay attention to surface irregularities, boot interactions and adhesions, and the dynamics of loose material. He was also told to look for “color/albeano variations of disturbed and undisturbed [soil].” Albedo is the reflectivity of the lunar soil. Albeano is a play on Bean’s nickname, Beano.

But most famously, the Apollo 12 backup crew snuck playmates into their prime crew’s cuff checklists. On the backside of a page describing core tube sampling in Bean’s checklist was a picture of Cynthia Myers, Playboy’s pick for Miss December 1969 with the caption “Don’t forget – Describe the protuberances.” 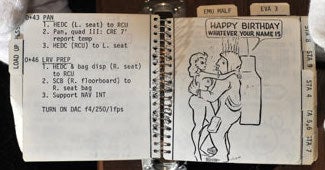 Finding Miss December sent Conrad searching through his own checklist. He found Angela Dorian, Miss September 1967, over the caption “Seen any interesting hills and valleys?” and Miss October 1967, Reagan Wilson, with the caption of “preferred tether partner.” Bean found a second playmate, Miss January 1969 Leslie Bianchini, in his checklist with the instruction to “survey – her activity.” 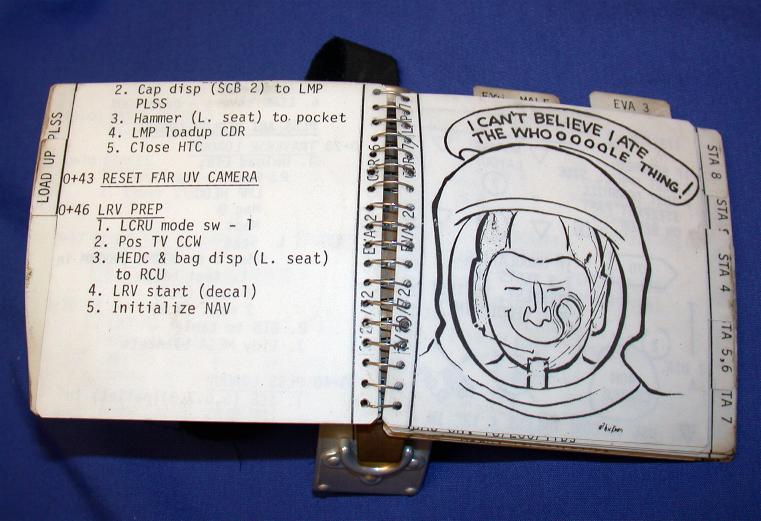 The astronauts, knowing their words were being broadcast to the world, managed to keep their reactions from ending up in the mission transcripts.

And while Apollo 12’s might be the most famous cuff checklists, they weren’t the only ones with “questionable material” snuck into its pages. Apollo 16’s Charlie Duke found some interesting cartoons in his cuff checklist. One showed a smiling astronaut licking his lips under a speech bubble saying: “I can’t believe I ate the whooooole thing!” while a second was a little less tasteful showing a suited astronaut in the company of a nude woman under the caption: “Happy Birthday whatever your name is.”

It’s not entirely surprising the astronauts found creative outlets to add some humour into their missions and let off a little steam, though it’s probably good that images of these checklists weren’t sent back on live TV from the Moon.