Operation Plumbbob and the Psychology of a Nuclear Blast

In the 1950s, part of developing the US military’s arsenal of atomic weapons was ensuring that the men who would... 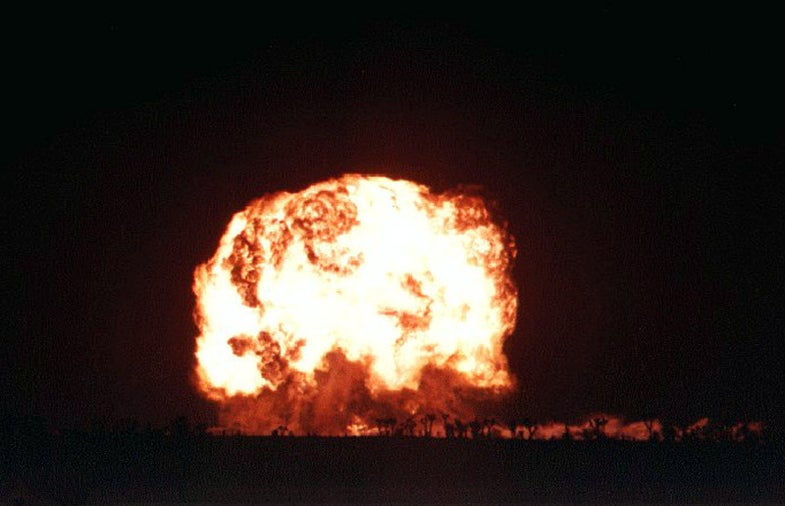 In the 1950s, part of developing the US military’s arsenal of atomic weapons was ensuring that the men who would be dealing with those weapons were adequately trained. And not just in deploying those weapons. Part of preparing the country for nuclear war meant preparing military personnel to respond to a nuclear attack without succumbing to the shock or fear of having witnessed an explosion.

Measuring the psychological response to a nuclear blast was one of the many goals of Shot Galileo. This shot fell under Operation Plumbbob, a series of 29 nuclear tests detonated between May 28 and October 7, 1957. 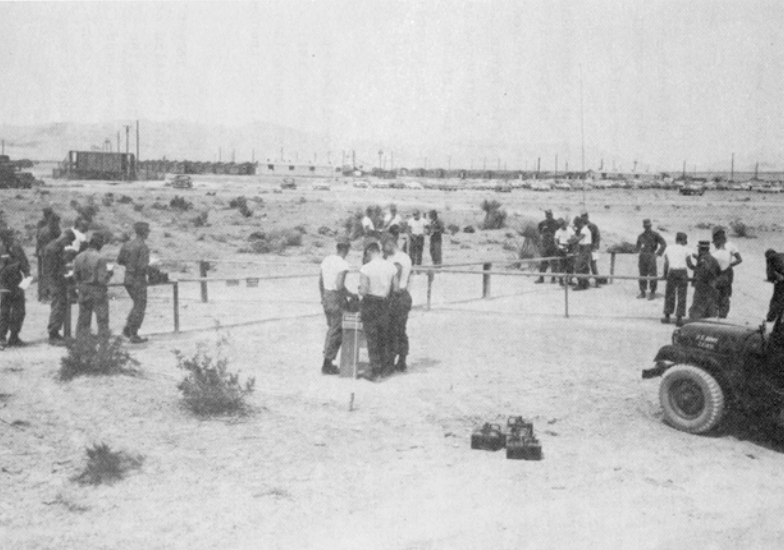 Though primarily a weapons development test to see whether this device could ever hold as significant place in the US Arsenal, the Department of Defense was involved in Shot Galileo to measure the bomb’s psychological effects on men who had never seen a blast. The men in question in this case were a company from the 82nd Airborne Division based in Fort Bragg, North Carolina. Called Task Force Big Bang, it consisted of 167 men, 100 of whom would do a series of tests after witnessing the Galileo detonation. The remaining 67 men would be on hand to assist the Human Resources Research Office in administering these psychological tests.

The test was fairly simple. The men of Task Force Big Bang would watch Shot Galileo from an observation area not to far from the blast. Then, they would immediately disassemble and assemble their rifles before clearing a fake minefield and running through an infiltration course. The whole setup was designed to mimic actions taken after an attack, and their efficiency would be measured against a pre-blast performance standard.

Task Force Big Bang personnel arrived at the Nevada Test Site on August 12 and began their training right away. They were introduced to nuclear weapons, debriefed in areas like radiological safety, and had a chance to familiarize themselves with their post-blast test activities.

But time was a factor; the men from Big Bang were only scheduled to stay in Nevada until September 5. As other detonations were delayed, so was the chance to study Task Force Big Bang’s reaction to a nuclear blast. By the end of August, it was beginning to look like the Big Bang Task Force might never see a detonation, and so they watched shot Smoky on August 31 without performing any post-blast activities, severely skewing the results the DOD would get during any psychological tests it was able to perform afterwards.

Finally, the day for Big Bang’s psychological test came on September 2, just three days before the men were scheduled to leave the desert. By 2:45 that morning, the 87 participants were at their observation position located just 2.7 miles east from the detonation site. At 5:40, the 11 kiloton bomb of Shot Galileo went off at the top of a 500-foot tower. The blast wave yielded winds faster than 40 miles per hour and kicked up a considerable amount of desert dust. 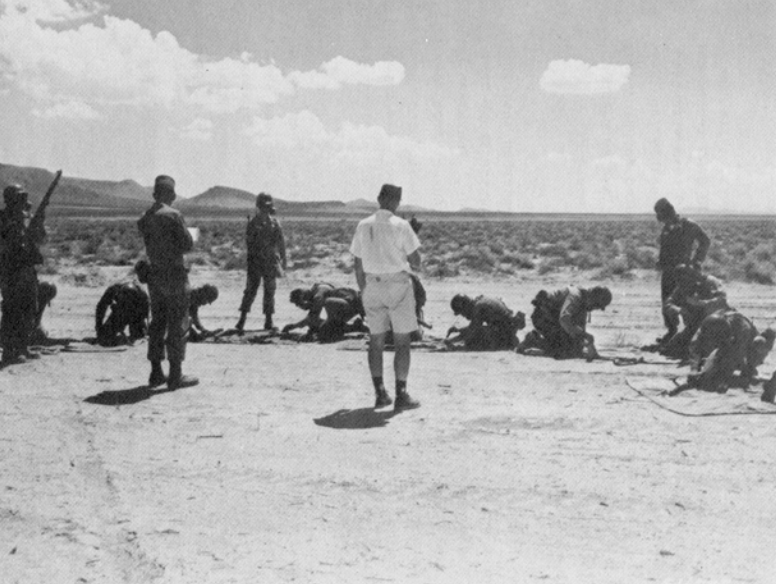 Immediately after the blast wave passed, the men of Task Force Big Bang donned masks and performed their rifle disassembly and assembly test Then they took a brief brake to breakfast on assault rations while a small group tested that the infiltration test course was sufficiently cleared of radiation from the Smoky shot two days prior. The area deemed same, Task Force Big Bang moved on, clearing the practice minefield before proceeding to the 206-foot long infiltration course.

In groups of four or five, the men walked 29.5 feet until they reached a barbed wire wall. Passing underneath it, they continued to crawl under nearly 50 feet of low barbed wire. This obstacle cleared, they sprinted 20 feet and dove into a foxhole where they hid from an absent enemy for ten seconds. Once the ten second had passed, they leapt from the foxhole and sprinted 26 feet to another barrier under which the had to crawl. This barrier cleared, they sprinted the final 50 feet to a wall made of smooth wires at which point they lobbed two practice grenades into a 4 square foot pit 36 feet away. Their grenades thrown, each man finished the course by giving his name to the test supervisor.

The last task saw each member of Task Force Big Bang processed in a decontamination chamber, surrendering his film badges to radiological safety personnel at the same time.

The men passed the test, and the average gamma reading for participants was 1.9 roentgens. The highest readings between 2.5 and 3.2 roentgens were associated with the test monitors who spent more time in radioactive environments than any test subjects. But whether the psychological testing was useful is another matter since the men were all familiar with the power of a nuclear bomb by the time they saw Galileo. In any case, no military personnel ever had to rush in to save survivors after a nuclear attack on US soil.