What is the solar wind, anyways? 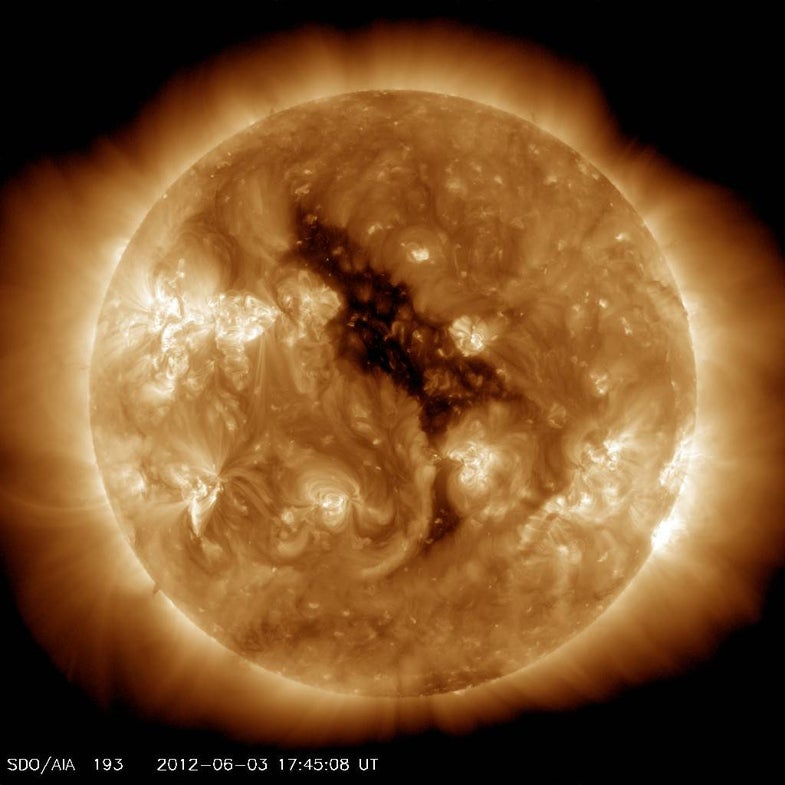 A coronal hole, like this one, can send a solar wind out into space. Other forces, including dust, can accelerate this wind. NASA/AIA
SHARE

375 light years away in the constellation Hydra is a dusty star. W Hydrae is one of the brightest in our night sky, and it’s gathering tiny particles of aluminum oxide dust in its outer shell.

Based on the estimated size of the aluminum oxide dust, the authors think it condenses into small particles around the star, growing larger over time. But when they get big enough, those particles start absorbing and scattering the star’s light. In the process, they get pushed out into space, accelerating a rush of plasma—charged gas—known as solar wind.

Stars like W Hydrae generally measure in at under nine times the mass of our Sun, and researchers think that roughly 40 percent of stars in this family—known as Asymptotic Giant Branch (AGB) stars—might have this aluminum oxide boost to their stellar wind.

What is the solar wind, anyways?

The solar wind is a plasma soup, brimming with electrons and protons, that continuously pours out of the Sun and through the solar system. It carries lines of magnetic fields with it, and ripples around other magnetic fields that get in the way—pebbles in a celestial stream.

Plasma blows off the Sun’s outer atmosphere, the corona, which has been observed during solar eclipses for centuries.

The solar wind travels at different speeds depending on where it originates, moving more slowly over the brilliant ‘streamers’ that leap off the Sun, and moving at high speeds away from cooler coronal holes, which show up as dark spots on x-ray images. Both the coronal holes and streamers are related to the Sun’s magnetic field—the streamers mark the pinnacle of a magnetic field, trapping plasma in the corona, while coronal holes allow the Sun’s plasma to flee out into space.

Usually, there’s a steady push zooming out towards the planets at 248 miles per second. But sometimes there are even gustier days, when the winds can speed along at up to 560 miles per second.

Why do we care about the solar wind?

Our magnetic field shields us from the worst of solar wind for the most part, but the plasma still interacts with our planet’s atmosphere—most visibly in the aurora. These dancing lights in the sky form when the solar wind moves toward the poles, where it runs into atoms in the atmosphere and releases the colored flashes we see from the ground.

But it’s more than just a lovely light show. NOAA tracks space weather, including the activity of the solar wind, because it can also carry huge coronal mass ejections. These can cause geomagnetic storms here on Earth, which have the potential to knock out electrical power around the world.

We have it lucky. Objects in the solar system without magnetic fields—like Mars, which lost most of its early atmosphere to the ravages of solar wind—can take a much harder beating. Researchers think the Martian moon Phobos might sometimes even carry an electric charge thanks to the solar wind’s powerful pummeling.

Researchers are still trying to understand more about our solar wind by making observations of our mysterious host star. There’s still plenty to learn. It was only last year that researchers finally got a good look at the boundary between the Sun and the early stages of the solar wind itself.

But understanding how stellar winds work near other stars—like W Hydrae—could tell astronomers more about how particles like aluminum form and spread through the Universe. That might not have an immediate impact on our present or future the way a massive, solar wind-induced geomagnetic storm might, but knowing more about where we came from certainly has its own appeal.