The silky swirls are home to a bright and large star-forming region. 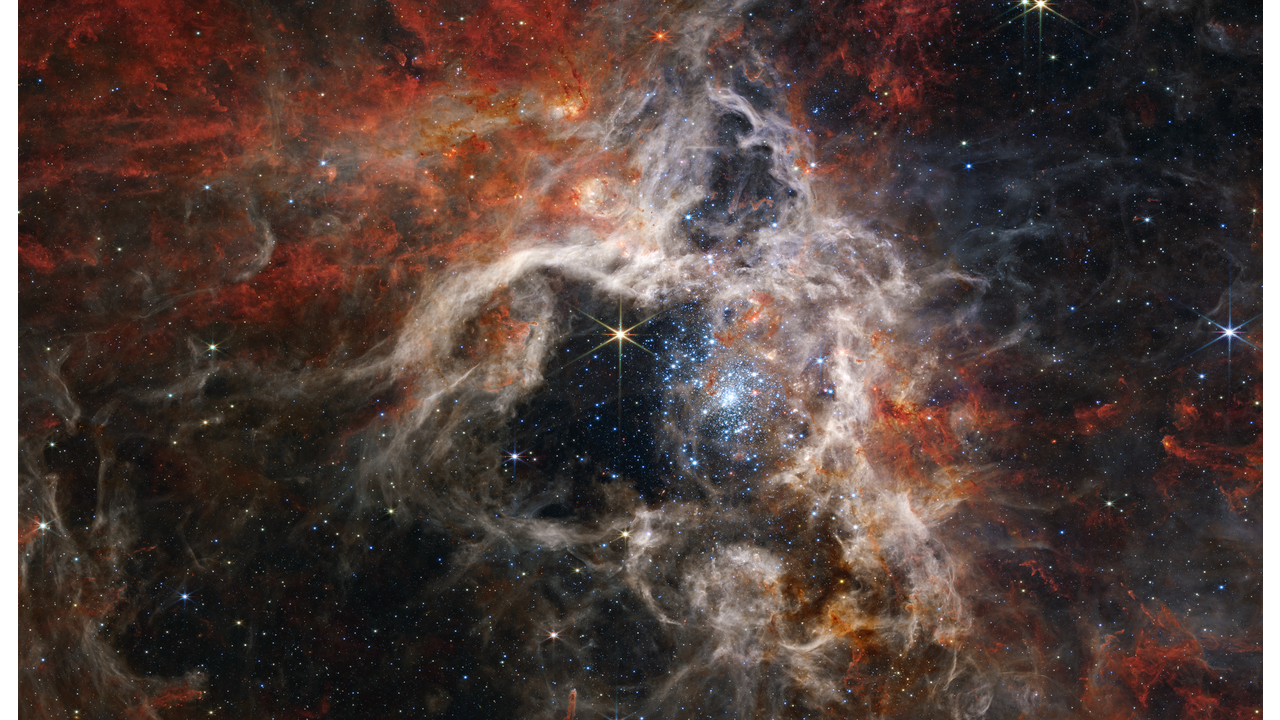 As the leaves in the Northern Hemisphere begin to change colors and Halloween decorations begin to emerge from dusty attics, the James Webb Space Telescope (JWST) appears to be embracing “spooky season.” The powerful NASA/ESA/CSA space telescope released chilling new images of 30 Doradus aka the Tarantula Nebula yesterday. The nebula’s arachnid inspired nickname comes from its similar appearance to a burrowing tarantula’s silk-lined home, according to NASA.

The Tarantula Nebula is about 161,000 light-years away from Earth in the Large Magellanic Cloud galaxy and is home to some of the hottest and and biggest stars known to astronomers. It is also the biggest and brightest star-forming region in the Local Group, or the galaxies located closest to our own Milky Way. In addition to the baby stars, the images captured by JWST’s Near-Infrared Camera (NIRCam) reveal distant background galaxies and a closer look at the detailed structure and composition of the nebula’s gas and dust.

The nebula’s cavity was hollowed out like a jack-o-lantern by blistering radiation from a cluster of young stars that sparkle pale blue in the new image. Only the densest surrounding areas of the nebula can resist erosion by the powerful stellar winds blown by young stars, forming the pillars that appear to point back toward the cluster. The pillars contain forming protostars, very young stars that are still gathering mass from a molecular cloud. The protostars will eventually emerge like a caterpillar from a cocoon and further shaping the nebula. JWST’s Near-Infrared Spectrograph (NIRSpec) caught a very young star doing just that, adding new knowledge to this stellar process.

“Astronomers previously thought this star might be a bit older and already in the process of clearing out a bubble around itself,” wrote NASA. “However, NIRSpec showed that the star was only just beginning to emerge from its pillar and still maintained an insulating cloud of dust around itself. Without Webb’s high-resolution spectra at infrared wavelengths, this episode of star formation in action could not have been revealed.”

Astronomers are also reaping the benefits of JWST’s Mid-infrared Instrument (MIRI), which can detect longer infrared wavelengths and see through the stellar dust in a nebula. MIRI peered into a previously unseen cosmic environment, where that the hotter stars fade, the cooler gases and dust glow, and the points of light within the nebula’s clouds indicate embedded protostars that are still gaining mass.

The Tarantula Nebula has been a favorite of astronomers studying star formation since it has has a similar chemical makeup to that of the gigantic star-forming regions at the universe’s cosmic noon. This is when the cosmos were roughly two to three billion years old and star formation was at its peak. The Tarantula Nebula is the closest (easiest to see in detail) example of what was happening in the universe as it reached that brilliant high noon of furious star birth.

According to NASA, JWST will help give astronomers opportunity to compare and contrast observations of star formation in the Tarantula Nebula with the telescope’s deep observations of distant galaxies from the actual era of cosmic noon.