Of all the foods to eat in a small spacecraft where the air is recirculated, tuna might be low on... 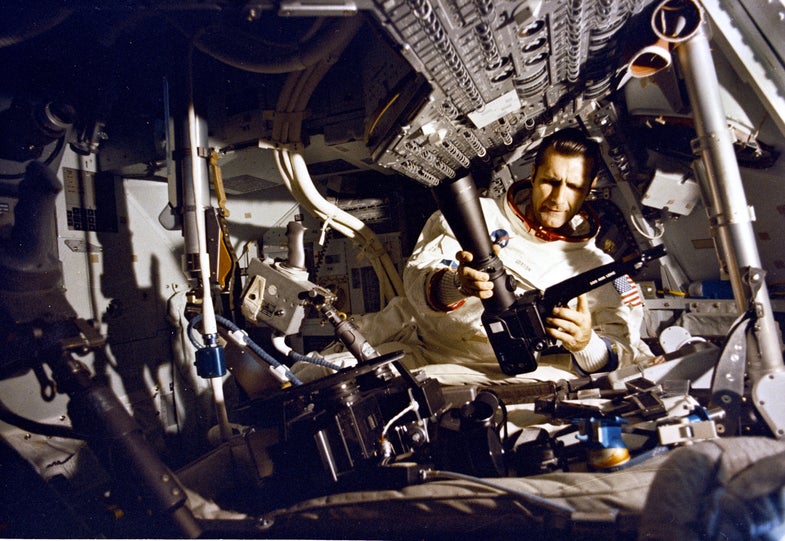 Of all the foods to eat in a small spacecraft where the air is recirculated, tuna might be low on the list. But there was tuna on board Apollo 12, and it became a bit of an issue on the third day of the flight.

Like all Apollo missions, the food on Apollo 12 was organized into meals that met the nutritional, caloric, and flavour needs. Three meals a day went through a four-day cycle such that each man would consume about 2,200 calories per day, plus snacks stored in an easily accessible pantry, without getting too bored.

The meals on Apollo 12 were comprised of more than 70 items. Some were rehydratable freeze-dried items, some were wet-pack and spoon-bowl foods, and others were ready to eat.

The rehydratable spoon-bowl meals came from a water spigot in the command module that dispensed water in one-ounce increments.

After injecting water into the food bag, the astronaut had to knead it for about three minutes to work the moisture back into the food.

If that doesn’t sound too appetizing, imagine doing that to a packet of tuna. Commander Pete Conrad’s meal plan was given in the mission press kit as indicative of a typical crew meal, and it included a rehydratable spoon-bowl of tuna salad as part of lunch (meal B) on Days 1 and 5 of the meal plan. 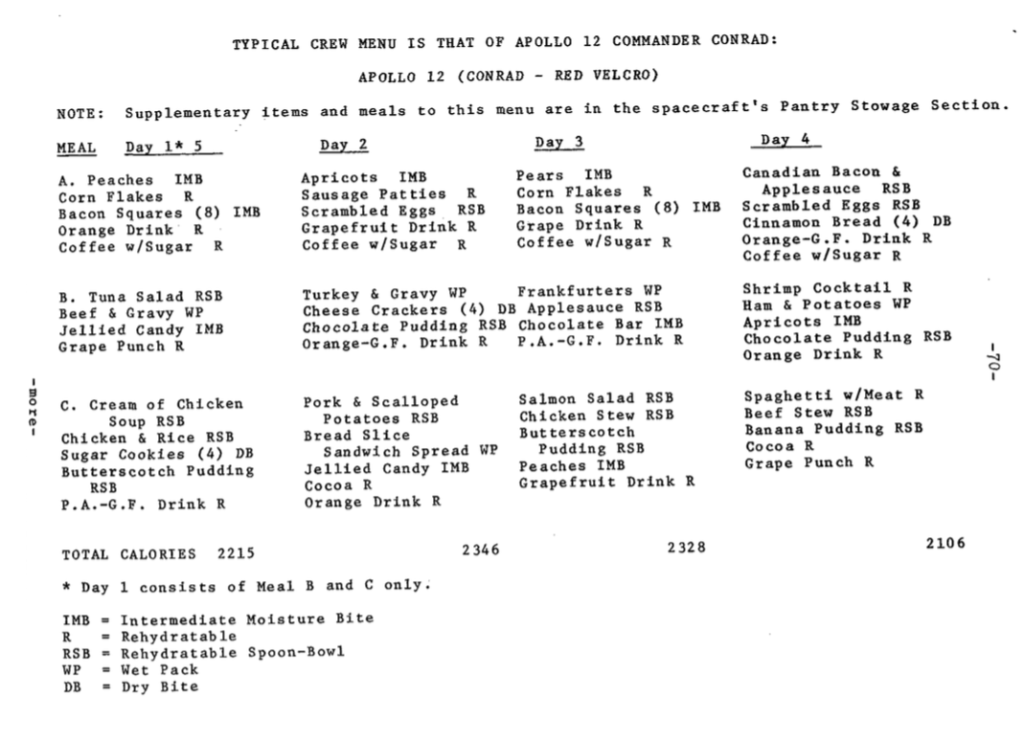 A sample meal plan from Apollo 12

It must have been in Command Module Pilot Dick Gordon’s meal plan, too, because on the third day of the mission, Gordon had a half pack of tuna left over from the night before. Lunar Module Pilot Al Bean asked mission control the status on that day-old tuna.

Bean: How about asking the food experts down there, we had a can of tuna fish spread salad last night, and there’s about a half a can left today, and that stuff’s still good to eat, isn’t it?

Lind: We’ll check. I’ll be right back with you.

Lind: The surgeon suggests you try a new one. New can.

Bean: Well, Dick has this one in his hot hand, and we just opened it last night. You sure that one isn’t all right?

There was then a comm break wherein Lind put the question of the tuna to the men on hand in mission control. The conversation picked up two minutes later.

Lind: We’re still checking with some people down here whether there’s, any problem over that tuna fish, but why don’t you hold off eating it until we get a better answer for you? 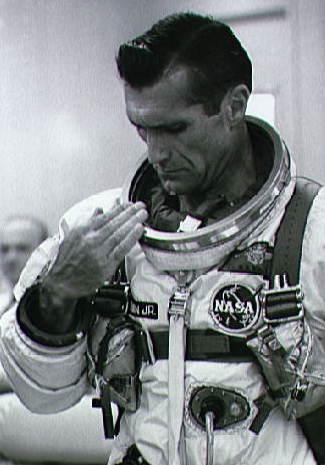 The tuna question remained open for another then minutes while men on the ground considered the implications of Gordon eating the leftover rehydrated fish.

Lind: You can’t imagine what consternation your tuna fish question has raised down here. We have a wide diversity of opinion.

Conrad: I decided it was…

Gordon: I decided it was okay.

Lind: Well, we have a vote that it’s okay. The majority says throw it away; there’s a minority report that says everybody can eat it except Dick Gordon.

Lind: Roger. They recommend that you probably throw it away.

And thus ended the 16-minute long tuna discussion on Apollo 12, 1a spacecraft then 194,345 miles from home traveling at 2,635 feet per second on its way to the Moon.

I’m still live tweeting the Apollo 12 mission; the tuna episode will come up tonight around 9:30 EST, and we are still on our way to the Moon! Follow me, @astVintageSpace, for the play by play of the second lunar landing mission, 45 years after the fact.