Lasers reveal the secrets of a feathered dinosaur fossil 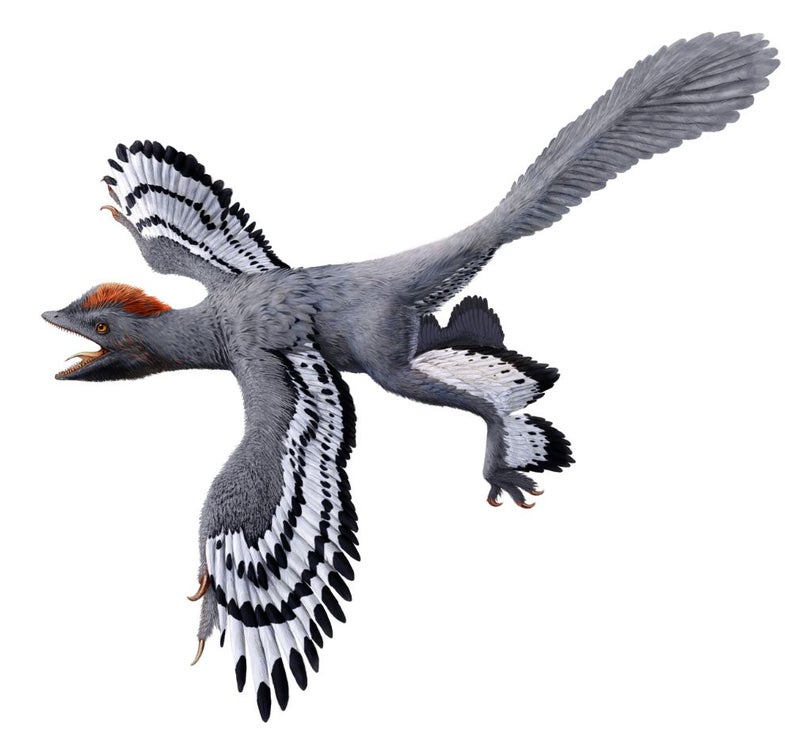 It was after dark at the Shandong Tianyu Museum of Nature in Pingyi, China. Paleontologists donned dark glasses that made their surroundings even more eerie, then shone a small, high-powered violet laser on the specimens sitting before them.

The room filled with a bright purple light, but the glasses helped the paleontologists block out the laser glow. They peered into the display cases to see a faint blue fluorescence emanating from some of their precious dinosaur fossils.

When they found a glowing assemblage of stone and bones, the researchers carefully moved the specimen to a darkroom and moved the laser slowly over it, this time recording the operation with cameras.

In the light of day (or under any visible light, for that matter) the dinosaur specimens would still be spectacular—members of a feathered dinosaur genus called Anchiornis that is already widely known as being near the intersection of modern birds and dinosaurs on the evolutionary tree, with features from both birds and dinosaurs present in the fossils.

But the violet laser light revealed far more stunning detail. Light from the laser interacted with minerals in the specimen. Suddenly, instead of a simple white halo in the rock around the bones, features emerged, revealing small scales and pads on the feet, and the shape of soft tissues around the body.

“What we’re effectively doing is making them glow in the dark,” says Tom Kaye, who developed the laser methodology used to look at the dinosaur fossils. “It’s a marriage of very old fossils with very new technology that’s allowing us to see things that we’ve never seen before.”

Kaye worked with researchers in China to document the glowing specimens in a Nature Communications paper led by authors Xiaoli Wang and Michael Pittman.

A wide range of different colors appeared under the laser light, painting the bones and the surrounding rock in a rainbow of hues depending on how various minerals—incorporated into the fossils during the more than 150 million years that they sat in the ground—interacted with the laser.

“The colors tell you only that here is something different about the geochemistry,” Kaye says. To actually find out why the colors were different, more detailed analysis of the specimen itself would be needed. But what was more interesting than the glowing technicolors themselves were what the sudden change in light revealed.

“The differences in mineralization brought out these differences in color, and that’s what brought to life the vivid detail of the scales, the skin texture and all of that,” Kaye says.

Near the wings, between the elbow and wrist, the researchers saw thin lines of tissue—called patagia—also found in modern birds. The feet revealed footpads covered in small, scaly features—just like modern birds—and like both dinosaurs and modern birds, the rear limbs of these creatures were almost drumstick-like in shape. Researchers still aren’t sure how this dinosaur moved; whether or not it flew, glided, or ran along the ground remains a mystery, but they now have a better idea of what the dinosaur looked like.

“We never expected to see specific body outlines,” Kaye says. But while the level of detail was astounding—and a first for researchers studying this particular group of dinosaurs—what they found was completely in line with current theories of what Anchiornis may have looked like.

“There’s nothing here that points in a different direction,” Kaye says.

The researchers are already planning to go back and look even more closely at a broader collection of these unique feathered dinosaurs. While this study looked at 200 specimens and found 12 that exhibited this particular fluorescence—no one is quite sure why these were so special—Kaye says that they eventually hope to look at an additional 2300 specimens, including about six species in total, at some point in the future.