Celebrate Year of the Rooster with the best chicken science 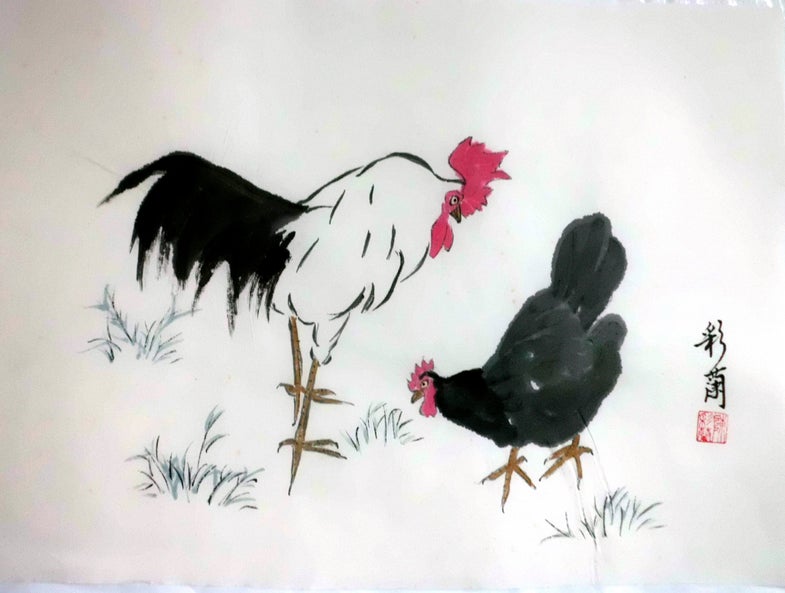 Saturday is the first day of the Chinese Lunar New Year, and celebrations have already started around the globe. This year is the Year of the Chicken (or Rooster, if you will). And what better way to celebrate than with a roundup of chicken science?

Chickens are more than meals on our table. From sacrificing embryos for the early research of developmental biology, to serving as handy dinosaur stand-ins for research, chickens deserve more than just their reputation as a protein source.

Knowing where to go (as they cross roads)

Domestic chickens, like pigeons, navigate with built-in compasses, or biological sensors that detect the magnetic field of the Earth. As researcher Wolfgang Wiltschko told LiveScience, some scientists believe that chickens’ magnetic sensors probably lie somewhere in their eyes, because chickens seem to need short wavelengths (like blue light) to navigate. In Wiltschko’s experiment, their sense of direction was lost under longer wavelengths.

So next time when you meet a chicken that’s crossing the road, don’t honk at it. Be patient. It knows where to go. Probably.

Running with a steady head

The best chicken superpower? Their ability to hold their heads super steady no matter how the rest of their body bobs around. Fujifilm and Mercedez Benz both published commercials featuring this steady-head phenomenon. But how does it work?

Unlike humans, chickens and other birds cannot move their eyes to make compensatory visual adjustments as their bodies move. So they must stabilize their heads to make sure their gaze is always where they need it to be. The eye-control system (vestibular-ocular reflex)—which automatically stabilizes your gaze while you run, jump, or dance—is simply lacking in chickens, according to Gizmodo.

A handy substitute for a dinosaur

Watch the gif. This might be how dinosaurs took a stroll.

Chicken are actually the last living dinosaurs, so researchers decided to stick a fake tail onto some chick butts in order to study how those ancient ancestors might have walked. As the researchers announced in the abstract of their PLOS paper: “Here we show that, by experimentally manipulating the location of the centre of mass in living birds, it is possible to recreate limb posture and kinematics inferred for extinct bipedal dinosaurs.”

Chicks raised with the fake tail indeed changed their postures, and had a more vertical femur structure as result, confirming “a shift from hip-driven to knee-driven limb movements through theropod evolution.” Not too surprisingly, this groundbreaking first-of-its-kind study won the Ignobel Prize for Biology in 2015.

Resurrecting dinosaurs by tweaking the chicken genome is not a new idea. Last year, Chilean researchers successfully grew a dinosaur-like bone structure in the legs of a chicken, making some solid progress towards the Chickenosaurus goal—an ambitious idea envisioned and popularized by the American paleontologist Jack Horner.

However, (as humble and cautious as scientists always are) the authors of that study told Motherboard that Chickenosaurus was not their ultimate goal. They just wanted to better understand how birds evolved from earlier dinosaurs.

Chickens don’t usually peck buttons in a power plant, except in the Simpsons. But they do peck to establish a social order, a hierarchy within the flock for access to food and water. The pecking order of a flock is often set in their chick stage, but can also be slightly changed with later fights.

Thorleif Shjelderup-Ebbe, a Norwegian zoologist, was the first one to coin the term pecking order from his close observations of chicken flocks. Social hierarchy has also been found in other living organisms such as insects, fish, and primates.

The ultimate form of rejection

Chicken social status actually matter a lot. Hens selectively reject sperm from low-status roosters. If the mating male is low in rank, researchers found, the female is more likely to eject his sperm.

“It is beginning to appear females can play a much more subtle, but powerful role in the battle for fertilization,” the study author Tommaso Pizzari of Oxford University told LiveScience.

The idea of breeding a Cosmopolitan Chicken—a hybrid of all types of chicken in the world—is one of the more grandiose chicken-related endeavors. Rather than using chickens for food, Belgian artist Koen Vanmechelen thinks of them as a symbol of multiculturalism and diversity, which led him to start the Cosmopolitan Chicken Project (CCP) in the 1990s.

“The CCP is a mirror. Every organism needs another organism to survive,” says Vanmechelen on the CCP website. The Cosmopolitan Chicken is up to its 20th iteration now, and such hybrid chickens with diverse DNA might be healthier than purebred poultry, according to Modern Farmer.

All this human inquiry is great, but what do the chickens think? As the Year of the Chicken begins, some of us might be curious about what intelligence and emotional depth these creatures have. Here’s a starting point for that intellectual journey: Neuroscientist Lori Marino, science director of the Nonhuman Rights Project, recently penned a review article called “Think Chickens”.