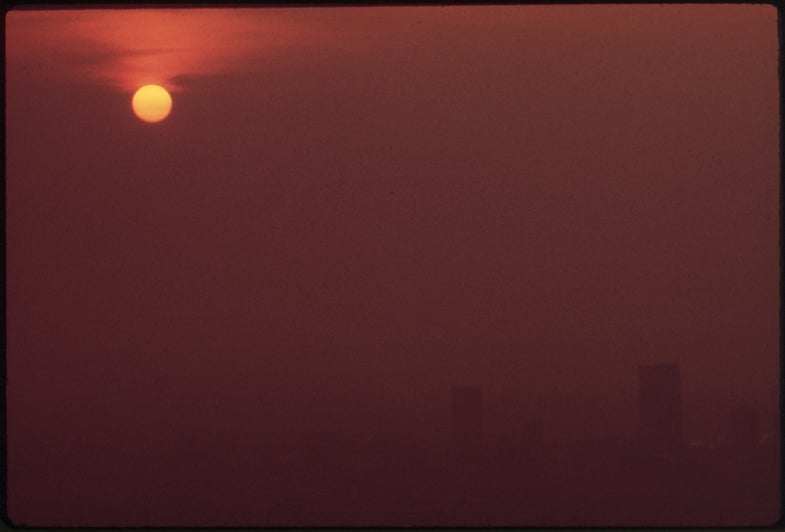 Note: This is part two of a four-part series about the United States Environmental Protection Agency. The agency, its policies, and the science that underpins those regulations has been under scrutiny in recent weeks. In fact, the agency is in danger of being drastically cut back or dismantled entirely. You can learn more about that by reading part one. This week we’ll focus on the agency’s origin story. And check out this gallery of photos of what America looked like in the early days of the EPA.

There is a story, often told as apocryphal, of American environmentalism in the 1960s.

The story goes something like this: In 1969, Ohio’s Cuyahoga River was so polluted that it literally caught fire. This horrific evidence of the country’s rampant pollution spurred Americans into action. On April 22nd,1970, the United States celebrated the very first Earth Day. A few months later, we created the Environmental Protection Agency, and Congress passed the Clean Air Act. In 1972, the Clean Water Act followed.

This story is very neat and compact. It’s bookended by Rachel Carson’s 1962 book Silent Spring on one end—the tome awakened us to the risks of environmental pollution. And then the Cuyahonga River lit a fire under us, driving politicians to finally take action.

But it isn’t quite true.

The Cuyahoga River actually caught fire many times—including once in 1952, and quite spectacularly in 1958. In fact, pictures of the much bigger 1958 conflagration are often mislabeled as showing the more famous 1969 affair. But neither of those earlier fires caught the attention of the national press, or the American imagination, quite like the 1969 blaze.

Incidentally, Cleveland residents had finally become fed up with their beleaguered river just about one year earlier. They’d passed a $100 million-dollar bond to fund the Cuyahoga’s cleanup in 1968. The Cuyahoga became the symbol of America’s pollution problems just as its caretakers finally started plans to clean it up.

Cleveland residents were not the only Americans who’d soured on the externalities of industrialization. Five hundred miles away, New York’s Hudson River—once famed for its fecundity of fish and marine life, especially oysters—was now synonymous with blight.

“Yonkers kids of my generation knew only three things about the Hudson,” wrote John Cronin in the book the River Keepers. “It was the boundary between New York and New Jersey; the dark, vertical Palisades on the opposite shore got their name from an amusement park that sat atop them; and the waters of the river were too polluted for swimming.”

Back then communities dumped raw sewage—urine and feces—straight into the river. Locals said that you could tell what color cars General Motors was making from the solvents that swirled in the Hudson’s waters. Which is why in 1965, New Yorkers voted for the one billion-dollar Pure Waters Bond Act to fund sewage treatment.

A survey of legislation—on the local, state, and national level—from the 1940s to 1970 (when Republican President Richard Nixon established the Environmental Protection Agency with bipartisan support) gives the story of the Cuyahoga River a different tenor.

The 1969 fire wasn’t important because it spurred Clevelanders into action—they’d already taken action. But when the Cuyahoga caught fire that Sunday morning and made the cover of Time, the incident revealed two things. First, that America as a nation had started to care about our environment. And second, that this wasn’t an issue that states alone could handle. You only had to look at New England’s forests to see why.

In the 1960s and 70’s acid rain was ravaging the forests of New England. Acid rain is the product of sulfur dioxide and nitrogen oxides that mix with water in the atmosphere before falling to the ground as rain or snow. In this case the rains fell on the same woods, streams, and ponds that inspired Thoreau to write Walden. Water—the very thing they needed to thrive—was killing them.

The source of New England’s woes were clear: Midwestern coal plants. Prevailing winds carry Midwestern pollution to the Northeast. The region is especially at risk, because its geological formations are less able to neutralize acidity in the rain. The result was dying forests. To save New England, the Midwest needed to produce less air pollution—and before the EPA, that simply wasn’t going to happen.

“A state like Ohio is not going to reduce emissions to save forests in New England,” said Eric Schaeffer. Before Schaeffer became the executive director of the watchdog group Environmental Integrity Project, he worked for the EPA under three administrations. “Maybe they should, but it’s not causing such a problem in Ohio. They’re not going to volunteer to spend money to have their plants reduce emissions by putting on scrubbers. It wasn’t happening. So along came those laws to reduce interstate pollution and set minimum requirements. So, you got some basic protections wherever you live.”

New England states could pass as many regulations as they wanted, but they were meaningless unless Midwestern states acted. Crabbers on the Chesapeake Bay depend on the behavior of farmers from five states—New York, Pennsylvania, Virginia, Maryland, New Jersey, Delaware—and Washington, DC. The Mississippi River’s watershed touches 31 U.S. states and 2 Canadian provinces. It’s hard to think of bi-lateral agreements that could control that. In fact, we know from experience that it was pretty much impossible.

Today, we recoil from the soupy, sooty air in cities like Beijing and New Delhi. When we do so, we forget the recent history of our own cities full of pollution just as thick. As these photos show, we’re not that far removed from the days when cities like Louisville lived under a smog dome. A time when we poured pollution into our drinking water. A time when developers built neighborhoods atop toxic waste.

“We have to celebrate how far we’ve come,” said Representative Don Beyer, Vice-Ranking Member of House Science Committee. “If the EPA is stopped right where it is, it’s way ahead of where we were when Rachel Carson published Silent Spring.”

But if we get rid of the EPA today we’ll be left less able to adapt to new hazards. And those hazards will keep coming. The chemical industry develops 2,000 new chemicals each year. Without the EPA around to keep industry in check—or if some of the agency’s existing regulations disappear—how will we keep up with the need to clean those substances up?

It’s a question that PopSci will continue to explore in the coming weeks. Stay tuned.