Come for the sea cow pictures, stay for the environmental policy 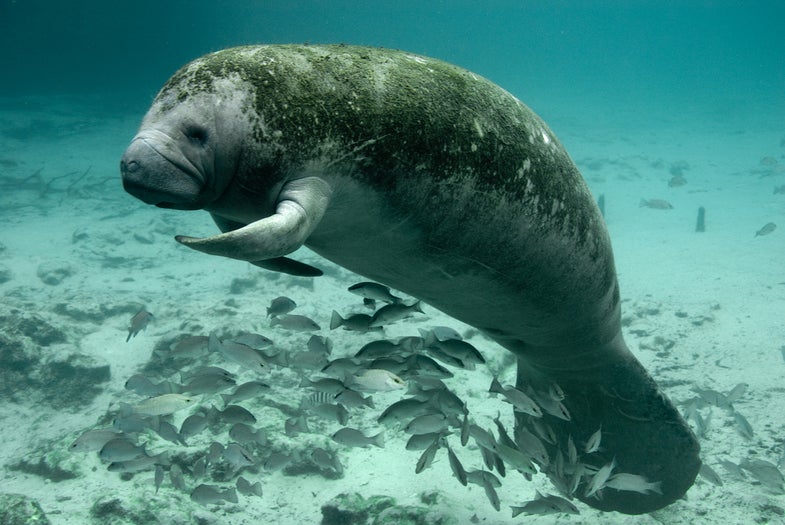 The fightin’ sea cows are making a comeback. Manatees have been on the endangered species list since 1972, but in the last few years they’ve been more abundant than ever. So abundant that they may have their status downgraded to ‘threatened.’

Like the land cow, the sea cow spends most of its time eating and resting, and also producing a lot of gas. Perhaps most importantly, they’re adorable. They look like big sad dogs, or maybe fat, lonely seals—in the best way possible. Just look at these guys:

It’s wonderful news that manatees are doing so well. Many of them get injured in boating accidents or die in cold snaps because they can’t find natural hot springs and try to take shelter by warm water treatment plants instead. We’re still not treating manatees perfectly, but their numbers have more than quadrupled since they were first legally protected. That’s a success story. Even back in 2007 it was clear they were doing well—that’s when the Fish and Wildlife Service published a five-year review recommending the change in status. Nothing was actually done about it, though, until the Pacific Legal Foundation came along in 2012 and petitioned them to make the change.

The Pacific Legal Foundation isn’t an environmental advocacy group. They’re mainly a property rights group. They’ve been to the Supreme Court multiple times to defend property owners from environmental regulations. This time, they’re representing the Save Crystal River organization, a local group of Floridians who want to enjoy the natural riverway they live around. Some of their activities include promoting cleanup and preservation of the environmental, while others focus on ensuring visitors continue to visit their lovely community. They argue that the restrictions put on the river—rules against touching manatees and regulations on speedboats, for example, which are reportedly enforced irregularly—are unnecessary.

“For 30 years, I’ve watched them take one bite at a time out of our community, whether that’s rules, regulations, whatever it is,” Steve Lamb, vice president of Save Crystal River, told NPR. “We decided enough was enough.”

Which is all to say that the reason the Fish and Wildlife Service is actually considering a downgrade isn’t because they were so overwhelmed by the evidence of manatees thriving that they were compelled to reconsider. It’s because a group known for defending people’s property rights asked them to.

None of that makes the change inherently wrong or ill-intentioned, but it’s worth considering that this movement started with an interest group. The majority of the Floridian public who weighed in were against a status change. The Save the Manatee Club seems fairly opposed to removing the endangered status. They’ve argued that we should be focusing on future protections for manatees, not just the current population numbers. Those manatees who die near water treatment plants do so because the warm areas the plants create aren’t as resistant to cold snaps as natural springs are, so if it gets too cold they freeze. And though the treatment plants often provide a perfectly safe place for them to winter, the manatees would still be in danger if Florida power companies got rid of those plants. Future uncertainties like that still haven’t been dealt with, which is one reason for keeping the manatees on the endangered list. They’d get more protections, plus if they were in danger again they wouldn’t have to wait to go through the approval process.

Even if they do get taken off the endangered species list, they’d still have protection under the Endangered Species Act and the Marine Mammal Protection Act. Threatened species can still have all of the protections afforded to endangered species, they’re just not guaranteed them. The Fish and Wildlife Service evaluates each species to determine which protections it needs. State agencies are allowed to “take” (a technical term) threatened species in the course of trying to conserve the animals—that means they’re legally allowed to kill, wound, trap, or move a manatee if it’s threatened, but not if it’s endangered.

So in theory, the shift in status could be in name only—if no one tries to change anything—but it does open the door for removing protections that manatees might need. We won’t know for a few weeks whether the Fish and Wildlife Service is actually going to take manatees off the endangered list. They’ve heard both sides of the debate, and now all we can do is wait. And look at more manatee pictures.