How It Works: Growing A Biological Drone To Explore Mars

Why ship hardware to space when we can just culture it on arrival? 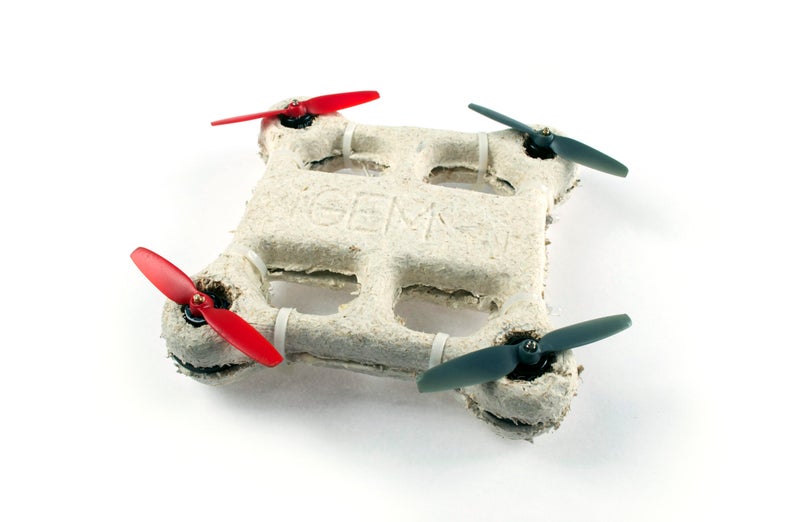 NASA is working on a prototype drone that will be able to survey Mars from a modest altitude. But what if instead of shipping a drone to Mars, we could just ship small vials of cells, and use them to grow a biodegradable drone on the Red Planet? A team of students from Stanford University, Spelman College, and Brown University created such a drone last summer, which they then entered into the 2014 International Genetically Engineered Machine competition.

Working with Lynn Rothschild, a synthetic biologist at the NASA Ames Research Center in California, the team created a drone composed of biological material from fungi and plants. The material is dead by the time the drone goes airborne, so it won’t form a new fungal colony should it crash. “These are lightweight, cheap, and won’t litter the environment,” says Rothschild. “It’s about as big a concern as leaving your sweater outside.” So how does one make a “bio-UAV”?

To start, the iGEM team designed the drone’s shape in 3D modeling software. This design file was sent to biomaterials company Ecovative Design, which fabricated the drone body from an 8-inch square of fungal mycelium via vacuforming. Then Ecovative filled this mold with biomaterial: straw and dead leaves. “The biomaterial gets inoculated with fungus, then fungus grows throughout all the material in the mold,” explains Eli Block, a member of the iGEM team and a junior in a dual-degree program at Brown University and the Rhode Island School of Design. “Before where it was kind of a loose material, after growing for a few weeks, it was a single solid chunk.” Two of these molds, each about 8 inches across and skinned in bacterial cellulose acetate, formed the drone chassis. “So it looks like a dried sandwich, and it’s the weight and feel of Styrofoam,” Rothschild says.

“It looks like a dried sandwich, and it’s the weight and feel of Styrofoam.”

Next, the drone is sterilized. “The point of it is you’re not flying anything that could introduce negative organisms into the environment,” Block says. “Also you have this new biomaterial that you don’t want to get eaten by mold. So you don’t want it to break down immediately.”

Genetic Engineering For Strength And Capability

The iGEM team conducted several tests and experiments on how to beef up a biodegradable UAV, to ensure that it could fly in harsh environments on Earth and other planets. For that the team went to work improving upon a Stanford-Brown iGEM project from 2012 on “Hell Cells,” genetically-modified bacteria created by taking the genes of “extremophile” bacteria and inserting them into E. coli. The result: bacteria resistant to radiation and extreme temperatures, hot and cold. These hardened cells might not only fortify the drone, but could also serve as biosensors to take readings from the environment.

“Let’s say you have certain cells that can sense carbon dioxide levels or radiation, and do some kind of color readout. You could be sensing things in parallel, without bulky sensors on your drone,” Block says. In other words, a biodegradable UAV could maintain its light weight by using genetically-modified biological sensors as opposed to heavier sensor hardware. There’s one caveat, however: In order to make use of any of the data gathered by biosensors, the drone itself would have to be recoverable.

To ensure the drone wouldn’t dissolve if sent up during a rainstorm, the team looked to paper wasps as a means of waterproofing the drone. “Paper wasps are an organism that when they build their nests they actually use cellulose, plant cellulose,” says Jotthe Kannappan, a 19-year-old junior at Stanford on the iGEM team. “They chew bark on trees, spit it out, and something in that saliva makes cellulose really waterproof and really thermal-resistant. So our experiment was to figure out what protein in the saliva does that.”

The team conducted an RNA extraction from the salivary glands of a paper wasp.

Kannappan says there are hundreds of proteins that could be in the salivary glands of paper wasps, so the team worked backward from a sample of a paper wasp nest, assuming that any proteins extracted from the nest would be the ones involved in waterproofing. “We got 30 good hits for the potential protein in the genome, and wound up picking five based on their structure, and then picked two /[that were] uncharacterized,” she says. Once those proteins were identified, the team conducted an RNA extraction from the salivary glands of a paper wasp to find a match. Kannappan says the team was able to isolate several of the proteins and then grow them in bacteria. The end product was a slightly yellowish liquid in a test tube a touch more viscous than water that could then be slathered onto a bio-UAV to make it waterproof—although the time taken up by identifying paper wasp proteins meant the team didn’t have a chance to test their waterproofing solution on the drone itself.

“We definitely did run out of time because it was a really intensive molecular process—there was a lot of debugging along the way,” says Kannappan.

Because the drone is composed of fungal mycelium and skinned with cellulose acetate, it’s capable of degrading on its own once it crashes. A trickier conundrum is what to do about the Hell Cells. How do you ensure that living genetically modified cells don’t intermingle with cells that are naturally present in the environment should the UAV crash? The answer is to insert what Block calls a “stop letter” into the cells’ genetic alphabet.

Essentially, the iGEM team further modified the Hell Cells to incorporate something called codon security, which draws on work done by George Church’s lab at Harvard Medical School in 2013 to create modified E. coli. These modified strands substituted a different three-letter “stop” codon—which marks the end of a gene—for the original found in the E. coli used.

“It was changing what some of the genetic code stood for,” says Rothschild. “It’s like you took a book and every time you saw the word ‘today,’ you read the word ‘blue.’ The idea is that if this crashed somewhere and there were living cells on it, they would be speaking a different language than other cells in the environment.”