Tomorrow, See A Short-Lived Red Lunar Eclipse In The Wee Hours Of The Morning 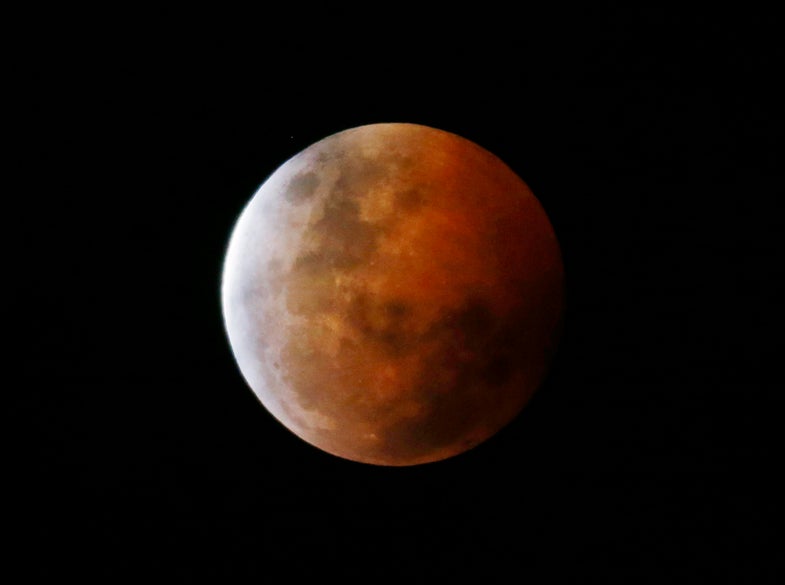 A total lunar eclipse, also known as a "blood moon", is pictured from Gosford, north of Sydney, October 8, 2014. The coppery, reddish color the moon takes is made as it passes into Earth's shadow. The total eclipse is the second of four over a two-year period that began April 15 and concludes on Sept. 28, 2015. The so-called tetrad is unusual because the full eclipses are visible in all or parts of the United States, according to retired NASA astrophysicist Fred Espenak. REUTERS/Jason Reed (AUSTRALIA - Tags: SOCIETY ENVIRONMENT TPX IMAGES OF THE DAY) - RTR49D02. © Jason Reed / Reuters
SHARE

Good news, America! Most of the country has great seats for tomorrow’s total lunar eclipse, which is set to take place around 7:54 a.m. Eastern. But you’ll have to be vigilant if you want to catch it: It’s not going to be long, lasting just from 5 to 12 minutes.

Lunar eclipses occur when the Sun, Earth, and Moon are all perfectly aligned, with the Earth square in the middle. The Moon passes right behind our planet into its shadow and causes what’s often referred to as a blood moon, since the moon glows red during the eclipse’s totality. Although the Earth blocks the Sun’s light from reaching the Moon’s surface directly, our planet’s atmosphere still refracts sunlight onto the Moon. But only colors with longer wavelengths—like red and orange—make it through, which is why the Moon turns a crimson tint.

For tomorrow’s eclipse, the Moon will barely pass through the Earth’s umbra, which is why the event will be so short. Sources are mixed on how long it will really last; the U.S. Naval Observatory estimates a totality duration of 12 minutes, NASA clocks it in at 5 minutes, and other sources say 9 minutes. However long it turns out to be, the eclipse’s short interval means the Moon won’t turn as deep red as it does in longer eclipses.

If you’re in the western part of the United States, you’ll be delighted to know that you’ve got a way better vantage point than us losers on the East Coast. Over here, the Moon will set while it’s still entering the umbra, preventing Easterners from seeing the total eclipse phase. But if you’re on the West Coast, you’ll be able to catch the whole show, as the Moon will set as it leaves the penumbra (Earth’s outer shadow). But you’ll just have to be up fairly early—around 4:54 a.m Pacific Time. Or you can just party really hard the night before and not go to bed.

Check out the map below, courtesy of Sky and Telescope to see if you’re in an optimal viewing zone: 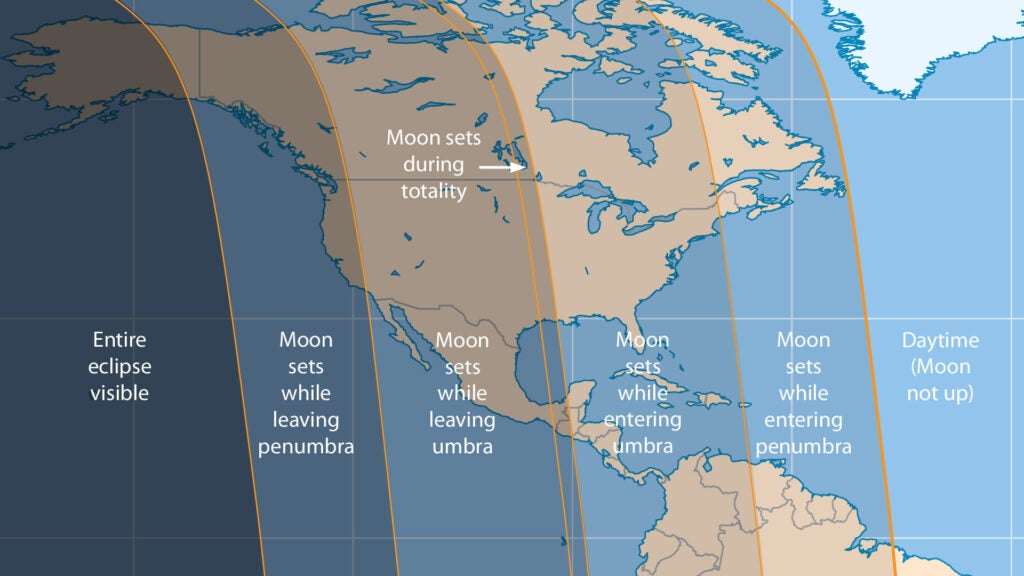