Just Discovered In Australia: The Largest Asteroid Impact Ever

When exactly the massive rock hit Earth remains a mystery 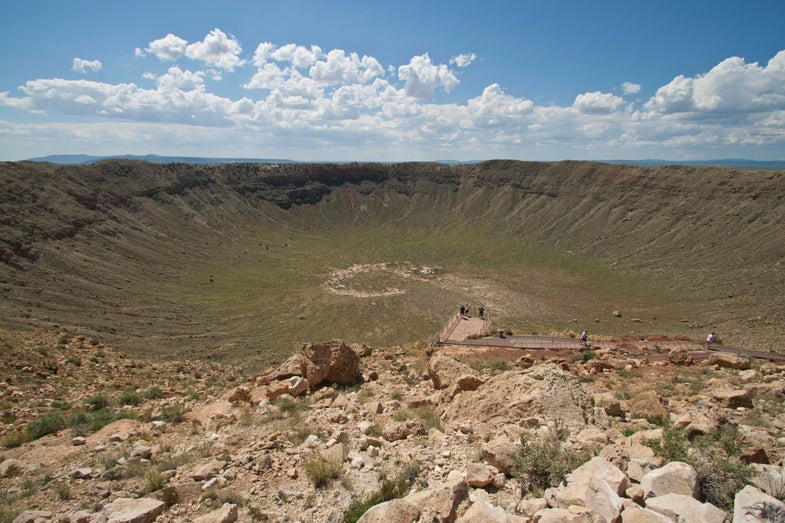 A long time ago, a huge meteorite entered the earth’s atmosphere in a screaming fireball. In its last violent moments, it split into two massive pieces, each at least 6 miles across, and slammed into the earth, creating twin impact craters spanning nearly 250 miles of the Australian countryside.

The craters have been covered over by natural processes since the impact, but researchers found evidence recently while drilling for a potential geothermal energy project. They found layers of quartz that had been shocked, a technical term for quickly deforming during an impact. When they looked closer, and did some additional tests on the area, the researchers found that there was also evidence from much deeper in the earth’s crust.

“There are two huge deep domes in the crust, formed by the Earth’s crust rebounding after the huge impacts, and bringing up rock from the mantle below,” lead researcher Andrew Glikson said

The research is published in Tectonophysics.

The previous record holder was the Vredefort crater in South Africa, clocking in at a diameter of 380 kilometers (236 miles.) The Vredefort impact structure remains the oldest known crater in the world, forming about 2,023 million years ago.

Age is a touchy subject for anyone, and scientists are still trying to tease out the exact age of the crater. In lieu of birth certificates, graduation dates, or embarrassingly dated cultural references, the researchers are examining the rocks around the impact site for clues as to when the impact occurred. The rocks around the crater are between 300 and 600 million years old, but they don’t contain the telltale layer of debris that would indicate an impact. As the scientists point out, for comparison, the impact that killed off the dinosaurs sent a layer of dust almost around the world, that scientists were able to date to the same time as the dinosaur extinction.

“It’s a mystery – we can’t find an extinction event that matches these collisions. I have a suspicion the impact could be older than 300 million years,” Glikson said.