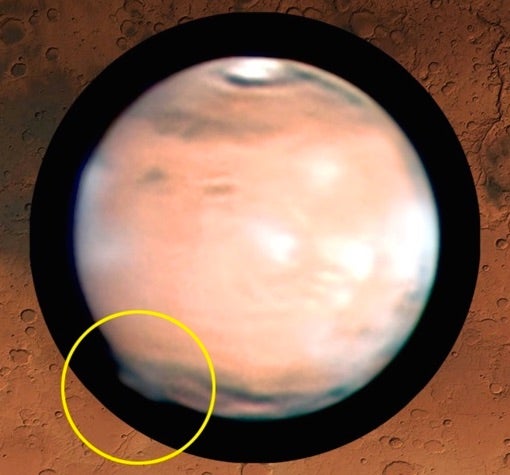 On March 12, 2012, amateur skywatchers noticed something unusual coming off of Mars’ southern hemisphere. It was an extremely bright plume, extending 120 miles or more into the Martian sky. Clouds, aurora, and other Martian phenomena had only ever been seen up to 80 miles high.

Now, a team of professional astronomers from Europe and the U.S. is publishing their hypotheses about what that plume could have been. In many ways, however, the plume remains mysterious. Almost nothing like it has been recorded before… and there’s not one explanation astronomers are certain about.

After its initial appearance, the plume grew over the next few days. On March 20 and 21, astronomers measured it to be between 300 and more than 600 miles wide. It changed shape rapidly, “going from double blob protrusions to pillars or finger-plume-like morphologies,” as the European-American team wrote in their paper, published today in the journal Nature. The plume lasted at least 11 days. (For the week after the 11th day, astronomers don’t have measurements for the region of Mars in which the plume appeared, so they don’t know exactly when it went away.) 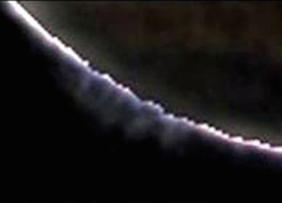 Plume in an enhanced view, created for analysis

Then, on April 6, a second plume appeared in the same region! That plume lasted at least 10 days.

The team searched databases of images of Mars taken by both amateur enthusiasts and the Hubble Space Telescope, dating back to 1995. They found only one thing like the March-April plumes in the past: an anomalous protrusion that appeared in Hubble photos taken May 17, 1997.

Using data from observatories on Earth, as well as the 1997 Hubble data, the team calculated how reflective the three plumes were, determining that the three plumes are likely similar in composition. Then, using models of Martian weather, they decided the plumes could have been enormous clouds, made up of tiny drops of frozen water or frozen carbon dioxide. It’s also possible the plumes were auroras, 1,000 times brighter than Earth’s own northern lights.

So which is the answer? More observation would eliminate some possibilities, the team wrote. Even so, their ideas raise further questions. For carbon dioxide or water clouds to form at such high altitudes, Mars’ upper atmosphere must have been much colder—at least at that time—than previously thought. And what about that bright aurora idea? Auroras need lots of energetic particles streaming in from the sun, but solar activity in March 2012 wasn’t especially high.