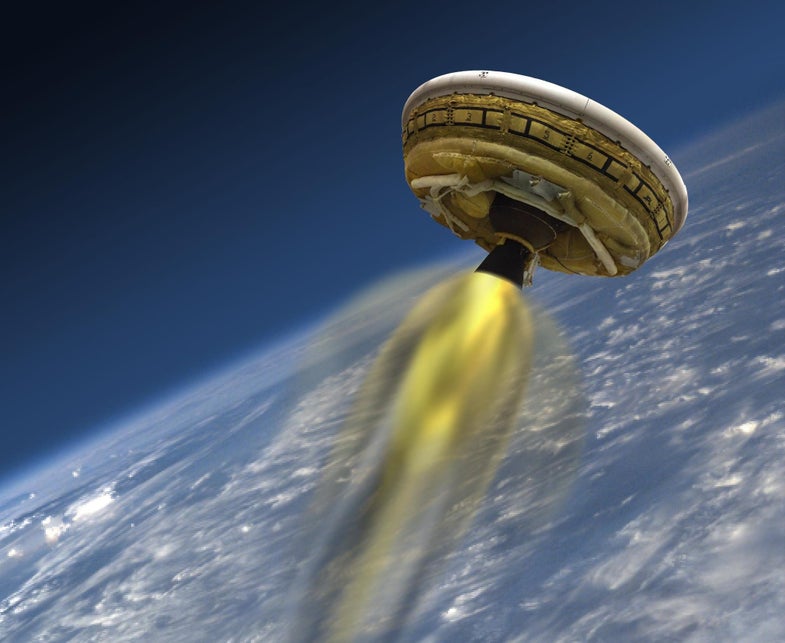 Update: The test was rescheduled until later this afternoon, and will take place from 2:30 p.m. and 3:30 p.m. Eastern Time.

Perhaps the most iconic symbol to emerge from the science fiction genre over the last century is every alien’s favorite mode of travel: the flying saucer. Often depicted as a spinning disc that smoothly glides through space, the flying saucer has become somewhat of a caricature of itself–a goofy, unrealistic way for extraterrestrials to travel the cosmos. But it turns out there may be something to the rotating disc design after all.

Last June, NASA conducted the first test flight of its Low-Density Supersonic Decelerator, or LDSD, in Hawaii. The LDSD (one of our 2014 Best Of What’s New) is essentially a rocket-powered flying saucer with an inflatable donut-shaped balloon covering its exterior. That design may sound a little kooky, but it’s great for landing on other planets.

NASA is looking for a safe–and slow–way to land on Mars. The atmosphere around the red planet is pretty thin compared to Earth’s, which poses an issue for landing heavy payloads. Our thick atmosphere helps to slow down vehicles returning from space. But Mars’ air doesn’t create enough drag, meaning super heavy payloads will pick up a lot of speed from Mars’ gravity on the way down, potentially crashing into the surface. Currently, NASA only knows how to land about one metric ton on Mars at a time, but they’ll need to land more than that if they want to establish any kind of long-term human settlements there.

LDSD is NASA’s solution to this problem. The disc shape and inflatable balloon around the outside of the saucer helps to increase the lander’s surface area, which creates drag as the vehicle descends and slows it down. According to NASA the balloon can help slow the vehicle from Mach 3.5 or more to Mach 2. Then, an additional parachute will slow the LDSD even further, from Mach 2 to subsonic speeds.

Of course, NASA has a lot of testing to do before the LDSD can gracefully land hardware and astronauts on Mars. In June, the space agency will attempt to fly the disc into near-space from the Pacific Missile Range Facility in Hawaii. Once it’s up, NASA will see how good it is at landing slowly.

But before that happens, NASA plans to conduct a “spin-table” test will take place today, March 31, to check the four small rocket rotors that spin and stabilize the lander as it descends. If you’re interested in watching this rotational research, NASA is setting up a livestream of the event, which will air between 12 p.m. and 1 p.m. Eastern Time. You can watch it here: