Digging up dirt on our satellite's back story 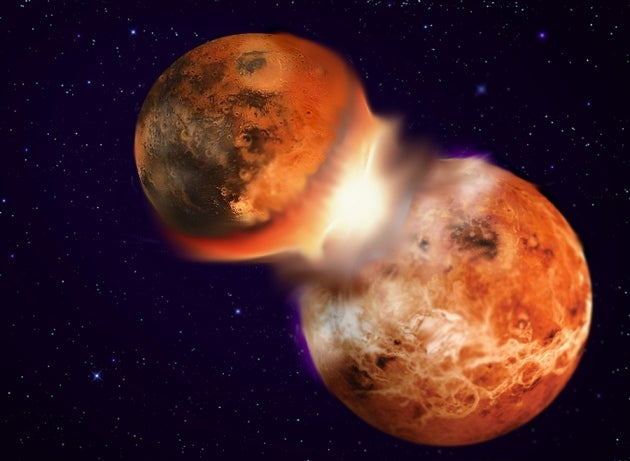 Our beloved Moon, often the staple of a peaceful and tranquil nighttime scene, has a pretty violent origin story.

In 1970, researchers proposed the “giant impact” hypothesis, which reasons that the Moon is the result of a huge collision between the Earth and another planetary body some 4.5 billion years ago. The idea is that an ancient protoplanet, Theia–which was about the size of Mars and at about the same distance from the Sun as Earth–somehow got pushed off of its normal path and hit Earth at an oblique angle. The crash destroyed Theia, and the debris from the impact eventually coalesced to form our natural satellite.

But there was a bit of a problem with this concept. The theory implies that the Moon would be composed of material from Earth and this mystery planet Theia. Yet analysis of moon rocks show that our Moon is very close in composition to our own planet. That means that for the giant impact hypothesis to be correct, this long lost Theia must have been like a sister to Earth–essentially like a smaller clone.

That caveat has long thrown a wrench in the theory, because many researchers speculated that it at the time, it would have been incredibly unlikely for Earth and Theia to be so closely related. One researcher estimated the chances to be at about 1 percent. Yet a new paper in Nature offers more optimistic odds. Now, researchers at the Israel Institute of Technology put the chances of Theia being geologically similar to Earth at around one in five.

Led by astrophysicist Hagai Perets, the researchers performed computer simulations of the solar system around the time the Moon would have formed. They wanted to see how often planets back then resembled the giant objects that crashed into them. They found that for about 20 to 40 percent of collisions back in the day, the two colliding planets would have been very similar, meaning they would have orbited the Sun at about the same distance and been made up of the same proto-planetary material. So the idea that Theia and Earth were nearly replicas of each other isn’t so far fetched after all.

While this doesn’t completely settle the giant impact debate, it does give the hypothesis a better leg to stand on. Plus, what’s a good origin story without a little mystery?