How Do You Handle A Medical Emergency On A Mission To Mars?

NASA is still trying to figure that out 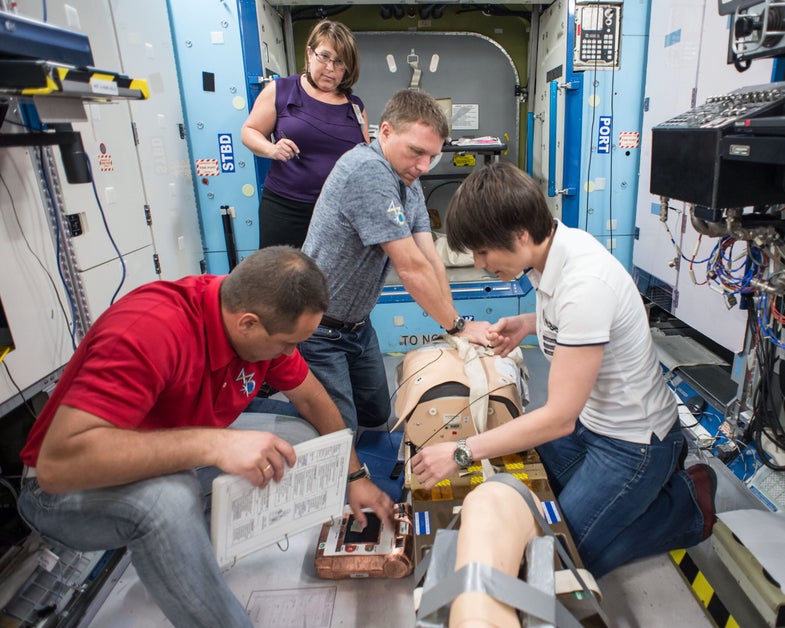 In order to be selected by NASA to go to space, an astronaut must be in almost perfect health, free of any known chronic conditions, and able to undergo rigorous physical training over the course of years.

But even though astronauts may be at the peak of fitness, they’re only human. Despite NASA’s excellent screening practices, no person is immune from medical issues. And even the most extensive amounts of preparation and training can’t prevent every single type of medical emergency that could occur in lower Earth orbit.

Dorit Donoviel is deputy chief scientist of the National Space Biomedical Research Institute (NSBRI), a NASA-funded group of institutions looking at all the health-related risks that can occur in the big wide vacuum. “Anything that can happen to you and me on Earth can happen in space,” she tells Popular Science. “You can have a kidney stone, a headache that doesn’t resolve, or elevated pressure on the brain. You can even have a heart attack. NASA needs to be worried about all the medical repercussions of an unresolved medical problem.”

“Anything that can happen to you and me on Earth can happen in space.”

Such an emergency in space could be a potentially disastrous event–both for the astronaut involved and for the space agency. Supplies and personnel are limited on the International Space Station (where all of today’s astronauts reside when in space) and the microgravity environment makes it extra tricky to perform extensive surgery if needed. Right now, the only option for such a life-threatening scenario is to do a medical evacuation, which takes a lot of time and an exorbitant amount of money to conduct.

And if the situation is really dire, the ailing astronaut may not have the luxury of waiting for a return to Earth to receive medical attention.

Stanford researchers are already testing out new ways to treat astronauts suffering from a heart attack in space, but what about the conditions that are even less predictable, like appendicitis? Ultimately, Donoviel wants to prevent this kind of disaster from happening. To do this, she and other members of the NSBRI fund private companies to come up with biomedical products that could be used on the ISS in case of an emergency. And as NASA looks ahead to long-duration space trips, such as a mission to Mars, the need for these devices will become more and more crucial.

“The more individuals who go to space for longer periods of time, the more likely there will be an adverse event,” says Donoviel. “We need to be in a position to address such an issue and avoid at all possible costs a medical evacuation.”

Currently, NASA’s only option to help a suffering rocketeer is to get him or her back to Earth as quickly as possible. That’s not easy. The space agency, in conjunction with Roscosmos, would have to launch an additional unscheduled Soyuz rocket to rescue the ailing astronaut. That would throw a huge monkey wrench into the planned missions ahead, as a portion of the space station crew would have to return as well (a Soyuz needs at least three astronauts to pilot it). And the price tag for such a mission wouldn’t be cheap.

“The costs would be very high,” claims Donoviel. “I’ve heard different estimates, but it’d be hundreds of millions of dollars. But we would have to do it. They’re highly trained valued public servants who put their lives at risk for our nation’s space program.” 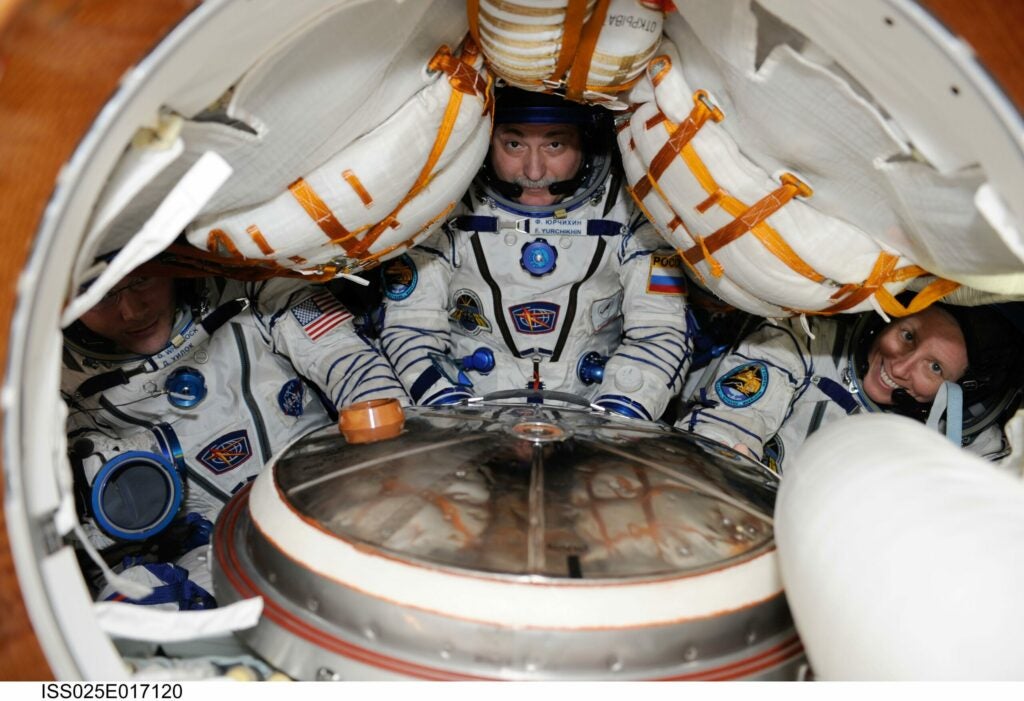 Only Means Of Evacuation

Inside the descent module of the Soyuz. For astronauts in need of evacuating the ISS, the Russian Soyuz is the only ambulance that can get them to Earth quickly.

Even though a medical evacuation would be a logistical nightmare, at least it’s still an option for NASA at the moment. That won’t be the case for future endeavors. On a long duration mission to Mars, astronauts won’t have anywhere to run to if they get ill, meaning any medical episodes will have to be dealt with in space. That’s where Donoviel and her team come in. The NSBRI awards grants to companies, tasking them with developing both diagnostic and treatment tools that can be used during space flight.

One such company is Sonomotion, a medical device maker developing new methods for diagnosing and treating kidney stones. With support from NSBRI, Sonomotion is developing ultrasound technology that can be used on board space vehicles to take images of the kidney, to spot a stone before it gets too big. Then, that same ultrasound technology can be used to move the stone.

“The more individuals who go to space for longer periods of time, the more likely there will be an adverse event”

“Using focused ultrasound waves, we can reposition kidney stones non-invasively,” says Oren Levy, CEO of Sonomotion. “If we can push that large stone back into the kidney, then we can relieve pressure, changing an emergency situation to one that still needs to be dealt with, but not emergency surgery.”

And if you want to remove the stone entirely? Sonomotion may have a non-invasive solution for that as well. The company is working on a technology called Break Wave that could be used on space missions, employing ultrasound waves to completely break apart stones while inside the body.

“It will be in a very small package, and it can break the stones using 10 times less focal pressure than existing methods,” says Levy. “That very low energy level has the potential to eliminate general anesthesia from these procedures.”

Sonomotion is one of many companies and research organizations working on medical tools NASA can use during a long-range space mission. But others mention the need for preventative measures, with many researchers arguing that some form of artificial gravity will be required on long-duration missions. Over thousands of generations, human organ systems evolved in relation to our planet’s gravity, so when they experience zero-G for the first time, they don’t always function to the best of their abilities. A prolonged stay in a microgravity environment can lead to the accumulation of fluids in the head, damage to the eyes and vision, and a higher risk of muscle atrophy. 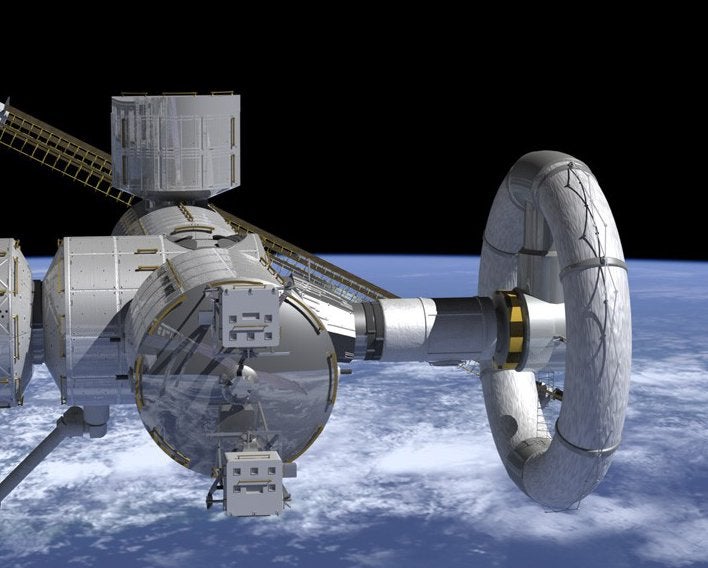 An artist rendering of the Nautilus-X, a concept for a module that could provide artificial gravity on the ISS. Nautilus-X did not move beyond the concept phase.

“One idea that’s most likely to be feasible is not to have the whole spacecraft rotate, but perhaps have a short arm centrifuge, which would be attached to a spacecraft,” says Donoviel. “A person would get into this module and cycle. By spinning yourself in it, you would create centripetal forces. We don’t know if these forces can fully replace gravity in terms of preserving human health, but we can figure that out with some research.”

As for addressing events that require open surgery, NASA isn’t there yet. Such a feat would need a lot of complicated labor, such as keeping the environment sterile from all the dust floating around in the space vehicle’s environment. Not to mention figuring out how to control any bodily fluids from floating away. Donoviel says zero-G operations most likely can be done, but NASA just doesn’t have the funds to invest in it right now.

So far, no NASA astronaut has suffered a life-threatening medical condition during a space mission. But, Donoviel says, it isn’t a matter of whether such a time will come–it’s when.