We Finally Know How Long A Day Lasts On Saturn

Figuring out the daily grind 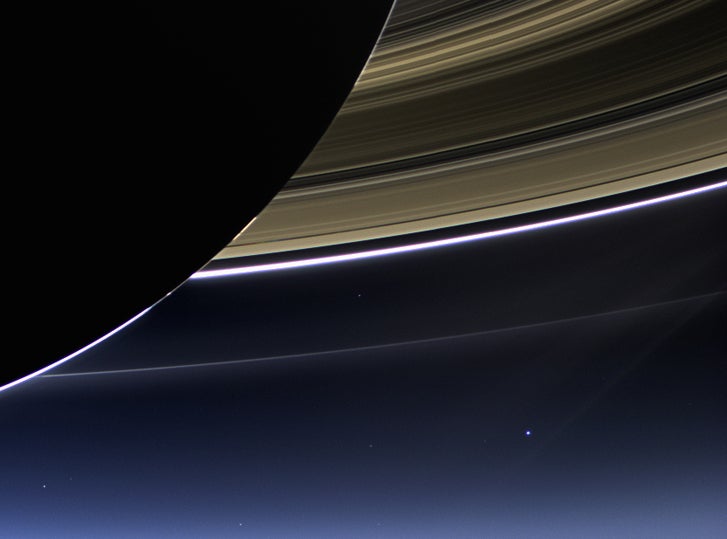 Ten hours, 32 minutes, and 44 seconds. That’s how long a day lasts on Saturn. Researchers finally calculated this elusive statistic thanks to a new method developed by Tel Aviv University and published in the journal Nature.

Up until now, that exact time has been something of a mystery, as it’s difficult to know for sure when a gas giant like Saturn completes one full turn on its axis. For rocky planets like Earth and Mars, researchers can simply track the position of a surface feature as it spins around. But Saturn’s thick layers of ammonia ice clouds obscure any visual cues on the planet’s exterior, and different parts of Saturn rotate at different speeds, since it’s basically a swirling ball of hydrogen, helium and other gases.

Over the years, researchers have received conflicting measurements of Saturn’s day length. In 1981 the Voyager 2 probe came up with a measurement of 10 hours, 39 minutes, and 22 seconds, by picking up on fluctuations in the planet’s magnetic field. But then 30 years later, the Cassini spacecraft measured Saturn’s rotation time as 10 hours, 47 minutes, and 6 seconds–8 minutes longer.

To get a more solid indication of Saturn’s rotation, Ravit Helled and her team used a statistical optimization method, which is a little bit like working backwards. They came up with various solutions for the rotation equation based on known measurements, including Saturn’s mass and gravitational field, while slightly altering the values for the unknown variables. They were then able to come up with the best rotation period “on which the most solutions converged.” They even checked the method on Jupiter’s rotational period, which is already well-established, and came up with a nearly identical estimate.

According to Helled, knowing the exact day period of Saturn is crucial for knowing the planet’s composition and internal structure. “The rotation period of a giant planet is a fundamental physical property, and its value affects many aspects of the physics of these planets, including their interior structure and atmospheric dynamics,” said Helled.

Correction (3/30/2015): The original story incorrectly referred to Helled as a he. We apologize and have fixed the error.