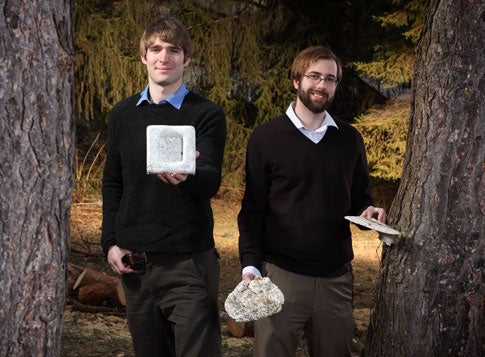 Eben Bayer and Gavin McIntyre want to line the walls of your home with mushrooms. The young entrepreneurs have created a strong, low-cost biomaterial that could replace the expensive, environmentally harmful Styrofoam and plastics used in wall insulation, as well as in packaging and a host of other products. Wind-turbine blades and auto-body panels aren’t out of the realm of possibility, either.

“We like to call it low-tech biotech,” Bayer says. In the lab, the inventors grow mycelia, the vegetative roots of mushrooms that resemble bundles of white fiber. But instead of soil, the roots grow in a bed of agricultural by-products like buckwheat husks, and those intertwining fibers give the material structural support. The mixture is placed inside a panel (or whatever shape is required) and, after 10 to 14 days, the mycelia develop a dense network — just one cubic inch of the white-and-brown-specked “Greensulate” insulation contains eight miles of interconnected mycelia strands. The panels are dried in an oven at between 100° and 150°F to stop mycelia growth, and at the end of two weeks, they’re ready for your walls.

Bayer and McIntyre’s work with mushrooms has come a long way since they first met as mechanical-engineering students at Rensselaer Polytechnic Institute. When the two set out to make biodegradable and renewable insulation, they started testing different varieties of mushrooms grown in Tupperware. Many prototypes later, lab tests confirmed their early hunch about the unusual properties of the mushroom-derived insulation. Mixed-in seed husks, for example, helped the mycelia withstand a blowtorch. And besides being cheaper and eco-friendlier than petroleum-derived products, Greensulate can grow at room temperature and in the dark, doesn’t require expensive manufacturing equipment built to withstand industrial conditions, and can easily be tailored to different levels of strength and flexibility. 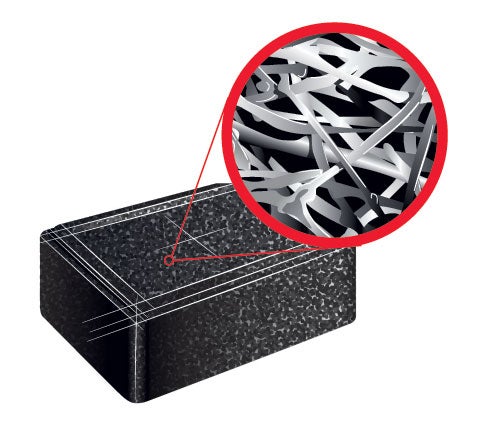 Greensulate: How It Works

Greensulate’s strength derives from billions of mycelia, or tubelike mushroom roots that intertwine with agricultural castoffs like seed husks. One cubic inch of the material contains eight miles of mycelium fibers

In 2007, the inventors incorporated under the name Ecovative Design and won $16,000 in funding through the National Collegiate Inventors and Innovators Alliance. A year later, joined by now-COO Ed Browka and other team members, they took the $700,000 prize at the PICNIC Green Challenge in Amsterdam.

Ecovative has begun a trial run of Greensulate panels as replacements for insulation in a Vermont school gym. The partners expect to complete all industrial certification and testing by the end of the year and have enlisted Jeff Brooks of the Timberline Panel Company to advise them on meeting American Society for Testing and Materials standards for building insulation. “If they get to the point where I think they’ll get,” he says, “there’s a chance there would be no reason to use conventional foam products.”