The red planet is literally shrouded in mystery 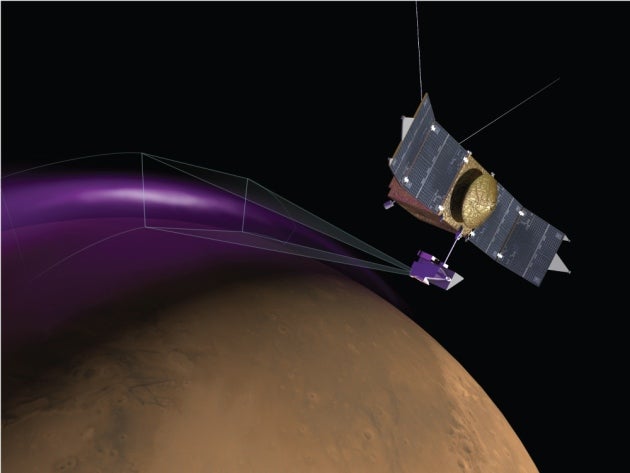 Our planetary neighbor just got a little more mysterious. In September, NASA’s MAVEN spacecraft arrived at Mars to study the planet’s upper atmosphere, and since its arrival, the orbiter has picked up two unusual readings: 1) There’s a giant dust cloud wafting high above the Martian surface, and 2) Mars has its own aurora.

Both of these discoveries come as a big surprise to NASA researchers, since neither space dust nor these kinds of auroras have been observed over Mars before.

Using its Langmuir Probe and Wave instrument, MAVEN (which stands for Mars Atmosphere and Volatile Evolution) has picked up small whiffs of plasma that form when dust hits the spacecraft and vaporizes. Dust particles have been picked up by other space probes throughout the solar system, but never before over Mars.

The dust seems to be concentrated between 93 miles and 310 miles above the planet, and there’s more dust on Mars’ dayside–the hemisphere illuminated by the Sun. Researchers have a number of theories about where these particles came from: They could be the byproducts of earlier comet visits or materials shed from Mars’ moons, Phobos and Deimos. The dust might even be coming up from the Martian surface somehow. But overall, the researchers aren’t totally sure. “It’s hard to understand how this stuff got here,” said Bruce Jakosky, a planetary scientist at the University of Colorado Boulder and the mission’s principal investigator.

And then there’s the enigmatic aurora, which MAVEN detected for up to five days in December. Dubbed “Christmas lights” by the MAVEN team, the aurora was seen at relatively low altitudes throughout Mars’ entire northern hemisphere, which is somewhat perplexing.

“We’re seeing it not connected to magnetic regions,” Jakosky told New Scientist. “We don’t know if it is occurring only at the places we’re observing, or if it is globally distributed.”

According to NASA researchers, the aurora seen by MAVEN was likely caused by a bunch of solar particles that blasted by Mars in December–but it may be that the auroras are caused by something else entirely.