But they are still 'vulnerable' 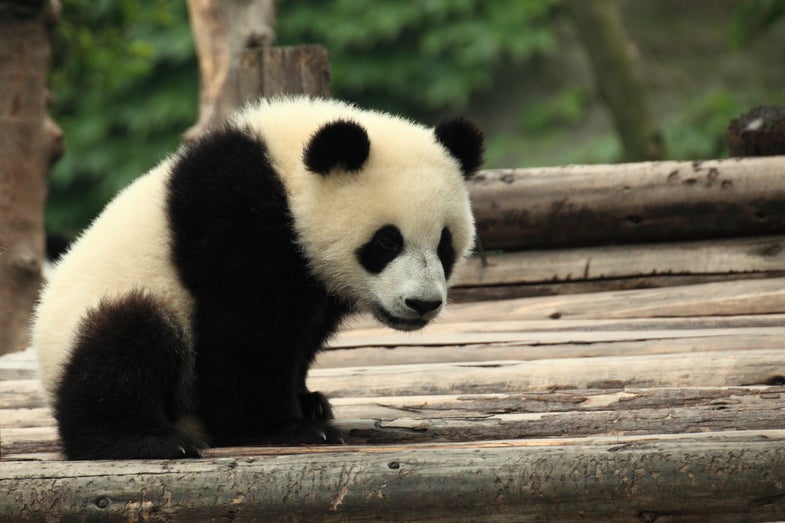 In September, the International Union for the Conservation of Nature moved panda bears from their "endangered" list to merely "vulnerable." And pandas aren't the only ones. The fuzzy creatures that inspired teddy bears got de-red-listed, and monarch butterfly populations seem to be bouncing back as well. Keep up the good work, guys. George Lu/Flickr
SHARE

Giant pandas, those beloved black and white furballs, and living emblems of conservation, are finally off the endangered list.

The International Union for the Conservation of Nature (IUCN) operates a Red List tracking the conservation status of species all over the world. On Sunday they announced that the giant panda was moving on up, out of the “endangered” category and into the less imperiled “vulnerable” group.

The news is seen as a huge success to the conservation community–particularly the World Wildlife Foundation (WWF), which uses the panda as its logo.

“For over fifty years, the giant panda has been the globe’s most beloved conservation icon as well as the symbol of WWF. Knowing that the panda is now a step further from extinction is an exciting moment for everyone committed to conserving the world’s wildlife and their habitats,” said Marco Lambertini, WWF Director General.

Panda numbers were alarmingly low in the wild for decades, due to poaching and habitat loss, but dedicated panda reserves and concerted conservation efforts by China (the panda is China’s national animal) have seen the numbers rise. There are now an estimated 1,864 adult pandas living in the wild.

Unfortunately, there was some bad news as well. Some species of gorilla were moved to the endangered list, illegal hunting is threatening a variety of mammals, and plants in Hawaii are struggling to survive amidst invasive species.