Inside the high-tech, last-ditch effort to save the northern white rhino

An animal fertility expert takes on a particularly tricky patient. 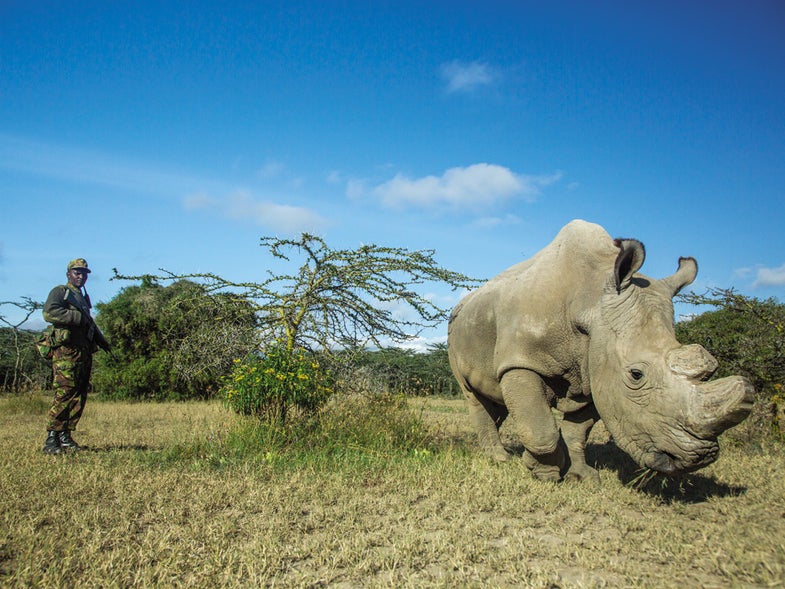 Thomas Hildebrandt first saw the inside of an elephant in 1990. With the mammoth carcass laid across his lab bench at the ­Leibniz Institute in Berlin, where the German veterinary student was working that summer, he pondered his thesis on using human-fertility techniques to save endangered wildlife. Hildebrandt, then 27, was taken aback by the mammal’s bizarre reproductive tract. The passage was 10 feet long and concealed by a folded vaginal opening as narrow as a sunflower seed. The task of artificially inseminating an elephant, he learned in that moment, would mean getting shoulder-deep in many a cavernous nether region. “I’ve always loved to solve problems other people cannot,” recalls Hildebrandt, now 54, of his 26-year career as an animal-­fertility expert and pioneer of endangered-species insemination. The procedures he’s developed take hours and demand a steady hand. Today, as the lead reproduction specialist at the Leibniz Institute for Zoo and Wildlife Research, he has more practice than anyone. He’s helped conceive more than 50 elephant calves, performed CPR on rhinos sedated for surgery by jumping on rib cages, and patented a slew of techniques and devices for making babies in these behemoths. This year, he’ll attempt his greatest feat yet: the first ever successful in vitro fertilization (IVF) of a rhino. Despite superficial similarities to its trunked cousins, the beast’s anatomy poses a new, high-stakes biological puzzle. If he can crack it, however, Hildebrandt could pull the northern white back from the brink. Colonial-era hunting, poaching, and habitat loss have put all rhino species at risk. Though people have used the creature’s horn in ­traditional medicine for thousands of years, a recent surge in demand in Asia sent populations crashing. South Africa lost 13 individuals out of some 15,000 to poaching in 2007; in 2014, the number hit 1,215. Three of the world’s five rhino species are now critically endangered, a designation marking them as at an extremely high risk of extinction. But the northern white rhino occupies a uniquely precarious position.

Only two—both females incapable of carrying calves— remain at the Ol ­Pejeta Conservancy in Laikipia, Kenya. Najin, age 28, has Achilles tendons that could rupture under the weight of a pregnancy. Fatu is younger but barren, thanks to a uterine infection. The world’s last male, Sudan, died in March at the age of 45.

But the beloved bull could still sire a calf. Sperm from Sudan (and four other males) is on ice, and Hildebrandt hopes to harvest Fatu and Najin’s eggs. The vet and his international partners will fertilize the ova in an Italian lab, and return the embryo to Ol Pejeta, where the kid-carrying will fall to a family friend.

With their robust population of 20,000 living individuals, Hildebrandt believes that the southern white rhino—technically the same species as its endangered northern cousin but so distinct from years of separation that many experts argue otherwise— can stand to spare a few females to serve as surrogates. 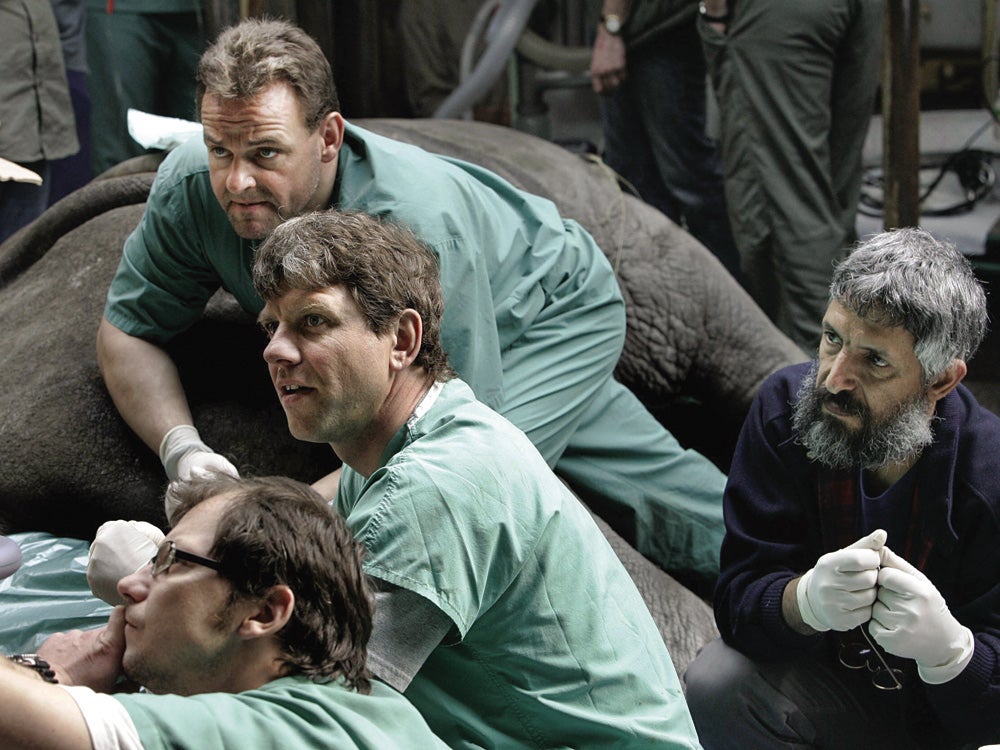 Hildebrandt (center) would be the first to harvest eggs from a northern white rhino, a potentially ­fatal procedure.

The notion to make test-tube offspring of at-risk wildlife came to Hilde­brandt through serendipity. While studying to become a livestock vet in the late ’80s, he visited his future wife. She was working as a birthing assistant at Charité Hospital in East Berlin, which just so happened to produce the first human IVF birth in the region. The facility inspired him to redirect his focus and tackle a thesis on using the technique to revive endangered species. “At the time, no one—not even the so-called elephant experts—knew how to use artificial insemination to help these ­animals reproduce,” Hildebrandt recalls.

That’s because decades of successes in ­human IVF—seeding an egg in a laboratory before implanting it in a mother or surrogate—don’t directly apply to other animals. Since its introduction in 1978, the U.S. alone has seen some 1 million babies born with the help of the method. But, somewhat unsurprisingly, there are nearly as many variations on the mechanics of reproduction as there are species. Pandas, for instance, can conceive only a few days out of each year. Whiptail lizards make embryos without male intervention. Fruit flies have enormous sperm (the insect is about ⅛ inch; its swimmers, more than 2 inches).

There are even disparities among close ­relatives, like species of rhino, so ­Hildebrandt must develop or refine unique tools and procedures for each new mammalian patient. Extracting eggs is the most delicate part of the endeavor. Though he’s already patented a handheld needle capable of reaching the ­ovaries through the rectum of the black rhino, collecting whites’ eggs demands a new twist on the tool. The custom probe still slips through the rectum but must span 6 feet long to allow the vet to snake it just past a major blood vessel that, if punctured, would cause the female to bleed out. Such risk ­demands extreme caution from the team; after all, there are only two northern white rhinos remaining.

“When it comes to using new techniques on ­endangered species, we don’t have the luxury of trial and error,” ­Hildebrandt says. “Precision is essential.” That’s why he has been using southern whites as guinea pigs for the harvesting procedure. He and his team of nine have spent two years refining the operation. They’ve successfully harvested eggs from 14 southern white females in European zoos, and none has experienced health issues as a result.

Hildebrandt says he might move on to making a northern white embryo by the end of the year. Then, 16 to 18 months later, the world’s first test-tube rhino calf could arrive.

Even if Hildebrandt succeeds in creating multiple calves, they could fail to propagate into a viable population. Two living rhinos and five deceased sperm donors don’t provide the gene pool with a lot of diversity (especially since Najin is Sudan’s daughter, and Fatu his granddaughter). Varied genes keep unfortunate mutations from quickly spreading and weakening the population. Contemporaneous work by a team at the San Diego Zoo could help with that problem. The facility holds frozen adult cells from 12 northern whites. Stem-cell biologists are working to reprogram them into sperm and eggs. But while Hildebrandt is hopeful that a future collaboration could bolster his efforts, for now the groups are working independently.

All these factors and more make saving the species “tenuous,” concedes Ol Pejeta CEO Richard Vigne. And whether future generations could safely return to their native Central African habitat is not his immediate priority. “We’re focused on getting more northern whites on the ground,” he says. He believes the team’s efforts support all species of rhino by showing their plight to the world, and could even spark similar efforts for other imperiled animals.

Hildebrandt himself is confident that a baby rhino will soon be stumbling around Ol Pejeta, and has no qualms about how much scientists must meddle to make it happen. “We must save this magnificent creature, since barbaric human actions caused its extinction,” he says. But he warns that efforts will collapse without funding. For now, the various entities working to save the subspecies are financing their own pieces of the puzzle, and costs are considerable. Establishing a wild population of northern whites could take more than $6 million, and Hilde­brandt’s department has less than $25,000 per year allocated to the project.

But Hildebrandt fiercely defends the potential ­expense. “I think about what people spend on cultural treasures—say, a da Vinci painting—and how many ­species that money could save,” he says. “Losing species means losing the books of evolution before we have the chance to read them.”

Millie Kerr is a journalist, wildlife conservationist, and former lawyer.
This article was originally published in the Summer 2018 Life/Death issue of Popular Science.

This text has been updated to clarify the work of the San Diego Zoo.