Belize shows that a little local action can go a long way. 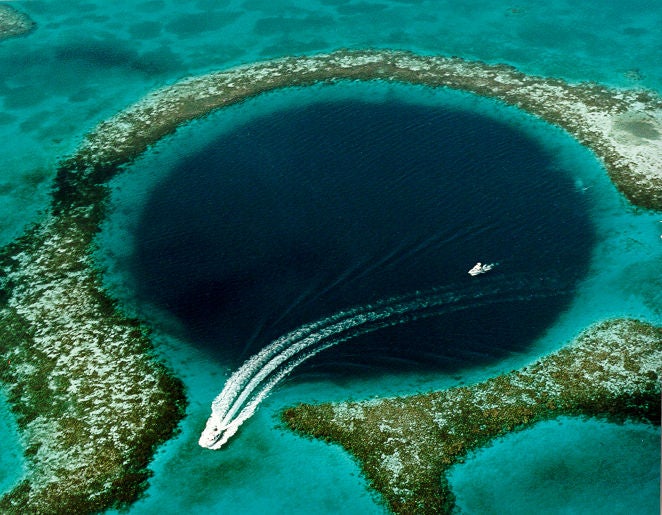 The so-called Great Blue Hole off the coast of Belize. USGS
SHARE

Coral reefs are a boon to biodiversity and marine ecology, and their declining health threatens our oceans with a loss of life that’s hardly comprehensible. So it’s a warm surprise to finally get some good news: UNESCO’s World Heritage Committee recently removed the Belize Barrier Reef System from its list of endangered sites—an affirmation of the country’s recent conservation efforts to help rehabilitate and protect the ecosystem from destruction at the hands of humanity.

“The Committee considered that safeguarding measures taken by the country, notably the introduction of a moratorium on oil exploration in the entire maritime zone of Belize and the strengthening of forestry regulations allowing for better protection of mangroves, warranted the removal of the site from the World Heritage List in Danger,” UNESCO said in a statement issued Tuesday.

To be perfectly clear, the move doesn’t exactly mean that the Belize Barrier Reef is now fine and dandy. It’s still threatened by a multitude of problems, some of which are bigger than Belize itself. But the key takeaway is that the government’s strategies provide a rare blueprint for how coastal authorities can take steps to ensure the conservation of some pretty vital natural systems.

“I was pleased to see the Belize Barrier Reef system removed from the Danger List,” says Richard Aronson, a professor in marine biology at the Florida Institute of Technology. “That change in status was based on concrete steps that Belize has taken to protect the reef system. It encourages the people and government of Belize, and the rest of us, to continue our work to preserve coral-reef ecosystems.”

The Belize Barrier Reef System is the largest living barrier reef in the western and northern hemispheres, and the second largest coral reef in the entire world (after the Great Barrier Reef). It’s home to an incredibly vibrant array of marine ecosystems, like offshore atolls, sand cays, lagoons, mangrove forests, and estuaries. Like other coral reefs, it’s a haven for biodiversity, including threatened species like the acroporas, queen conch, nassau grouper, whale shark, and antillean manatee.

Moreover, “coral reefs provide essential ecosystem services to humans, apart from their inherent attributes of high biodiversity and the wonder they inspire in all of us,” says Aronson. They are a source of food for more than half a billion people around the world, and can safeguard tropical and subtropical shoreline communities from the erosion caused by storms. They are worth tens of billions of dollars annually in income from tourism and ancillary activities—“our economy is largely based on the tourism sector, which in turn is successful because or our reef system,” says Nicole Auil Gomez, the Belize Country Program Director at the Wildlife Conservation Society. And we’re continuing to unearth all kinds of potential breakthroughs (such as cancer-fighting compounds) from research of the reef’s organisms.

On the flip side, coral reefs are also sensitive to a wide variety of threats. Rising water temperatures have given way to unprecedented rates of coral bleaching and disease. As the coral degrades, the fish that call the reef home (and help sustain the habitat) start to die off, too. “As part of my own research,” says Aronson, “evidence from cores of reef-frameworks in Belize have led me to conclude that the changes we are seeing on the Belizean barrier reef are novel events in at least the last 3,000 years.”

Auil Gomez also points out that “land-based sources of pollution are becoming increasingly problematic, as we see the effect of nutrients and solid waste in and beyond the reef, with reduced coral and seagrass health.”

UNESCO put the zone on its List of World Heritage in Danger site in 2009, after finding significant disappearance of the reef’s mangroves, a push by Belize for offshore oil drilling, and the approval of some unsustainable building projects.

Thankfully, Belize chose to respond pretty sensibly: in December 2017, politicians passed a moratorium on offshore oil drilling throughout its entire maritime zone (spearheaded in part by an informal referendum sponsored by environmental groups in which 96 percent of voters voiced opposition to oil drilling), and enacted new regulations to preserve the mangrove forests. Authorities also imposed a ban on fishing for certain species that eat seaweeds which compete with baby corals for space. The survival of these fishes helps keep potential coral interlopers in check.

The new strategies bolster the argument that local governments can do a lot to help local ecologies, but there are limits. “The conservation strategies and accomplishments in Belize addressed the local issues, such as overfishing, coastal development, and pollution from the land,” says Aronson. But climate change is a global problem, requiring a global solution. “One country cannot address climate change in isolation, and more international effort will be required,” he says. “Belize deserves praise for taking big steps toward solving the more local issues, so that when we get a handle on carbon emissions the ground will be laid for speedier recovery of the reef ecosystem.”

Things aren’t as grim as they might seem. Nature tends to be pretty resilient, and the more we learn about corals, the more we realize these creatures, endowed with a rich “genetic wealth,” might actually be able to evolve and adapt to a hotter, more stressful world. Still, they could probably use a little boost from us—maybe in the form of, say, reduced greenhouse gases?