Kitty DNA Shows Cats Have Evolved To Learn From Treats

So toilet-training really should work, right? 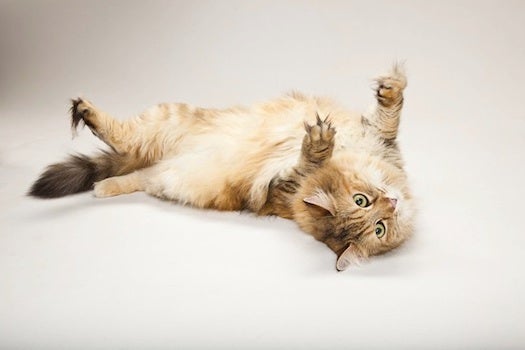 A cat can’t tell you much about its history (mrow?) but its genetics can. Today, an international team of geneticists is publishing the most thorough read yet of the DNA of a domestic cat. This is the first time scientists have read the cat genome carefully enough to tease out details about how evolution—and humans—have changed them.

The team found evidence that a combination of evolution and human selection favored genes that give cats distinctive traits. These include sharp senses, a love for meat, and even the ability to learn (some) tricks in return for treats. The research follows on the first cat genome sequencing effort, which was published in 2007. This latest read used genetic material from the same purebred pet, a female Abyssinian named Cinnamon. For some parts of the analysis, Cinnamon’s DNA acted a stand-in for all domestic cats’, while in other parts of the analysis, the researchers also sequenced more pet cats, as well as wildcats.

Among the kitty genes favored by natural selection are more than a dozen ones for sharp hearing and eyesight. For example, cats have an eyesight gene that’s similar to an eyesight gene in humans. The cat version, however, has small tweaks that scientists think help cats see better at night than people are able to.

Cats also seem to have more genes related to digesting fat than other carnivores do, which is important for their super-meaty diets. (Scientists call cats, including wildcats, hypercarnivores.) Cats even have genes that may help them avoid heart disease from their high-fat diets. Polar bear genomes bear similar markers of selection for fat-digesting genes.

To look for the genes influenced by human selection, the researchers analyzed DNA pooled from 23 pet cats, including Cinnamon. They compared the domestic cat DNA with DNA from four wildcats. Among the feline genetic traits that people seem to have chosen are ones that influence how the cat brain responds to rewards. Yep, that means kitty treats! Mice that are missing the mouse versions of some of those genes are poor at learning with food rewards. Perhaps when people first brought cats into their barns and homes, they chose the ones that were more motivated to do things for people in return for tasty tidbits.

In addition, domestic cats have genes that control how their brains develop when they’re embryos. These are similar to embryo-brain-development genes found in domestic horses, farmed pigs, and other tame animals. The wild relatives of these animals have different versions of those genes. In their paper, published in the Proceedings of the National Academy of Sciences, the cat-genome researchers wrote they support the “domestication syndrome” hypothesis. The hypothesis argues that most domesticated animals have this altered brain development while they’re embryos. The early-stage brain changes are what give them the seemingly unrelated traits of tameness, including smaller ears, docility, and different coloring from their wild relatives, or so the hypothesis goes.

So when you go home to cuddle your kitty tonight, give him some treats (to train him to enjoy your snuggles). Then tell him he’s practically as fierce as a polar bear… although he bears the same marks of domestication as many of his brethren in the animal kingdom, which people have tamed for their own uses over the last 10,000 years.