Snakes get a bad rap, but we humans probably have them to thank — at least in part — for... 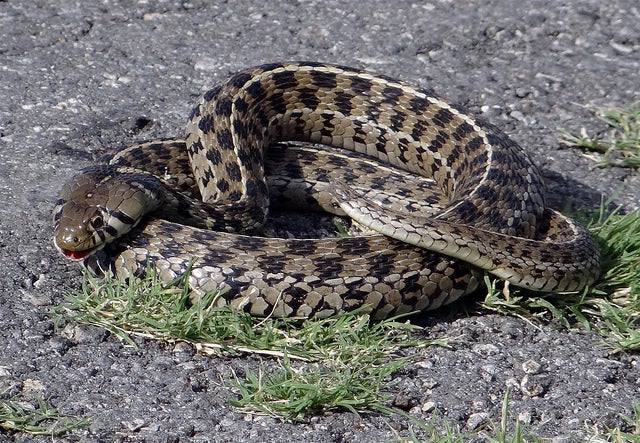 Snakes get a bad rap, but we humans probably have them to thank — at least in part — for our superb vision.

A crafty serpent supposedly tempted Eve in the Garden of Eden, causing the ruination of humankind; today, ophidiophobia is one of the most common fears of animals. But these aversions are rooted in evolution. Snakes really are dangerous, and have been throughout the evolution of primates — so we’re primed to be on the lookout for them, according to something called Snake Detection Theory.

A new study published in December put this theory to the test, comparing humans’ snake detection capabilities with our spider-sensing capabilities. It turns out people are remarkably good at noticing snakes, even when it’s hard for us to focus attention — like when snakes are camouflaged or when we only get a brief glimpse of them.

To study this natural snake-seeing power, Portuguese and Swedish scientists went back to Charles Darwin, who in 1872 published a self-experiment on snake fear. He recounted how he stood in front of a window at a zoo and stared at a puff adder, a poisonous viper from western Africa, vowing to himself that he would not recoil when the snake tried to strike.

“As soon as the blow was struck, my resolution went for nothing, and I jumped a yard or two backwards with astonishing rapidity,” Darwin wrote. Snake fear is a natural reaction.

As the authors of this new study point out, more people die from snake bites every year than die from tropical diseases, including dengue fever, cholera, leishmaniasis, schistosomiasis, Japanese encephalitis, and Chagas’ disease. That’s according to a 2010 study in the Lancet. This equates to a significant evolutionary pressure, according to Snake Detection Theory. People who are good at noticing snakes would be less likely to be surprised and bitten, and more likely to survive to pass on their genes. So the need to detect serpents became a major driver of primate vision and even brain evolution, the theory goes.

But do snakes really take precedence over other “scary” animals? Psychological tests show that people are also sensitive to spiders, for instance, and rate them as “highly frightening.” They’re not as deadly as snakes, though — and they eat insects, not mammals. Still, the general human distaste for arachnids makes them a good comparison for snake sensing, according to study author Sandra Soares and colleagues.

They showed 205 volunteers a series of pictures, which contained images of snakes, spiders, mushrooms, flowers and fruits. The subjects had to press different button if the snakes or spiders were present or not. In a series of time trials, volunteers were more likely to notice the snakes than other targets, and they were more likely to accurately detect snakes than anything else, the researchers found.

The same was true when the researchers tested the volunteers’ peripheral vision: “Snakes were more efficiently detected than spiders and spiders were more efficiently detected than mushrooms,” the authors write. And when they tried to distract the viewers with other images, they were able to direct attention away from the spiders, but not the snakes.

In all, snakes got the most attention and got it the fastest, the authors say. That’s consistent with the basics of Snake Detection Theory.

“Our data provide new perspectives on the potentially unique role of snakes as agents likely to have shaped central aspects of primate evolution, including what has been regarded a hallmark of African apes, our superb vision,” the authors write.

The study is published in PLoS ONE.