Bats Use Mini Muscles to Tweak Their Wings In Flight, And Drones Could Too

When a bird or a bat takes flight, there’s much more going on than a simple flapping motion. This is... 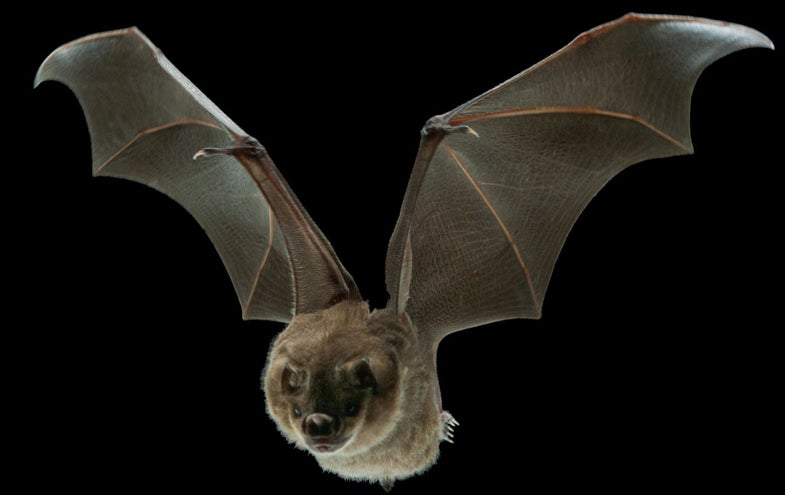 When a bird or a bat takes flight, there’s much more going on than a simple flapping motion. This is part of the reason why it took humans such an incredibly long time to fly like one of them (you can read more about that here). The physical motion is incredibly complex, with a slight curvature at the shoulders on the upstroke and the downstroke. Then there are the minor adjustments, the little tweaks that help the animal dive, turn on a dime and quickly alight.

Bats are uniquely equipped for this, swooping and whirling with exacting precision to avoid obstacles, find pollen and fruit, and catch tiny, erratically flying prey. They can do it thanks to their membrane wings, which are made of leathery skin stretched between their hands, forearms and shoulders. The membrane catches air like a hang glider — tiny adjustments can equal big changes in flight. That’s good from an evolutionary perspective, because it uses less energy. But it also be hard to control wings like this; you can crash if you’re not careful.

Bats have an array of unique, weak muscles called the plagiopatagiales proprii embedded in their wing membranes. Scientists have known about them for a century, but nobody has explained what they’re for. 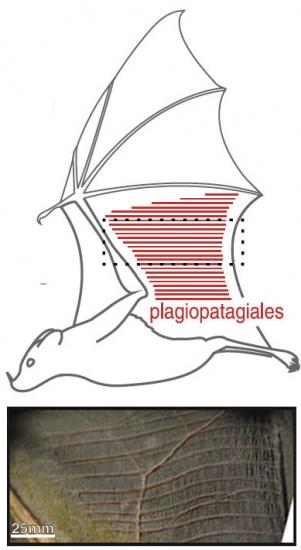 Tiny muscles, called plagiopatagiales, work together in synchrony to stiffen or reshape an area of a bat’s wing during the wingbeat cycle.

Jorn Cheney, a graduate student at Brown University and lead author of a new paper about these muscles, wanted to figure it out. He thought they could either be important activators — working together to morph and exert force in a bat wing — or passive sensors, letting a bat feel how much its wing is stretching so it can adjust its flight pattern safely.

He used a thin layer of liquid latex to attach tiny thin electrodes to the wings of three male Jamaican fruit bats. When they woke up from their anesthesia, they flew around in a wind tunnel while Cheney filmed them at 500 frames per second. Here’s a sample:

It turned out the PP muscles were absolutely crucial for controlled bat flight. They tense up on a bat’s downstroke, and relax on the upstroke, acting in synchrony to stiffen the bat’s wing. They can even adjust their flexing and relaxing according to the bat’s speed, like shifting gears. When bats are flying fast, their muscles tense sooner in the downstroke cycle. All this lets the bat make fine-tuned adjustments to its flight, and make them very quickly.

“Because bats have these muscles in their wings, and also bones that can control the general shape as well, they can adopt any number of profiles,” Cheney says.

This is an interesting find for biology’s sake, but it also has implications for human-designed flapping fliers.

In another lab across Brown, engineers are working on bat-inspired robots. Graduate student Joseph Bahlman built a 3-D printed robotic bat wing based on the lesser dog-faced fruit bat, and tested it last year. This wing included an elastic membrane stretched over plastic printed “bones.” Now the team is tweaking its design to account for the specialized muscles.

“This is one more knob that we have to turn now,” says engineering professor Kenneth Breuer, who wrote an accompanying paper to the mini-muscle research. “To be able to use these membrane wings and be able to control the properties in the way that we suspect bats do, using these muscles, is a great opportunity for biomimetic systems.”

The papers appear in Bioinspiration and Biomimetics.