Unlike other GMO crops, the potatoes' new qualities come from added doses of potato genes, instead of genes taken from other species. 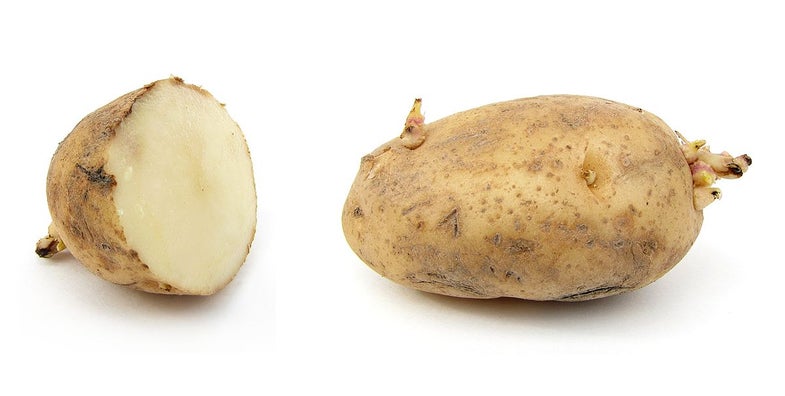 There’s a new Mr. Potato in town. This weekend, the U.S. Department of Agriculture approved a few new genetically modified potato varieties for farmers to grow commercially. There are genetically modified versions of the popular Russet potato and the Atlantic potato, the New York Times reports.

When fried, the new potatoes, called Innate potatoes, produce less of a chemical called acrylamide. Acrylamide appears in some starchy foods when they’re cooked at high temperatures. It’s most abundant in French fries and potato chips. It also appears in tobacco smoke. Scientists think acrylamide raises people’s risk for certain cancers, but it’s not clear how much acrylamide people to have to eat to raise their risk for cancer… so it’s not clear how much eating Innates would lower their risk, the New York Times reports. Innate potatoes also bruise less than non-GMO potatoes, a quality that farmers and shippers prefer.

The potatoes are part of a newer generation of genetically modified crops that:

Previously, genetically modified crops in the U.S. were created with qualities that benefit farmers and shippers only, such as being Roundup Ready. (Outside of the U.S., researchers have developed GMO crops to help combat malnutrition.)

Another GMO crop of the new style that’s close to approval is the Arctic apple. Arctic Grannys and Arctic Goldens are modified so that they’ll stay white longer after being sliced. Both Arctic apples and Innate potatoes get their improved qualities from genes taken from other varieties of their own kind. That is, Innate potatoes have added gene fragments taken from other cultivated and wild potatoes, while Arctic apples have added apple genes. That contrasts with today’s most popular genetically engineered crops, which get their new qualities from genes taken from different species, such as bacteria.

Companies are hoping GMO-wary shoppers will find their same-species-only products more appealing… but that remains to be seen. Both have faced loud resistance from anti-GMO groups.