Your Diamond Ring Might Explain the Origin of Life on Earth 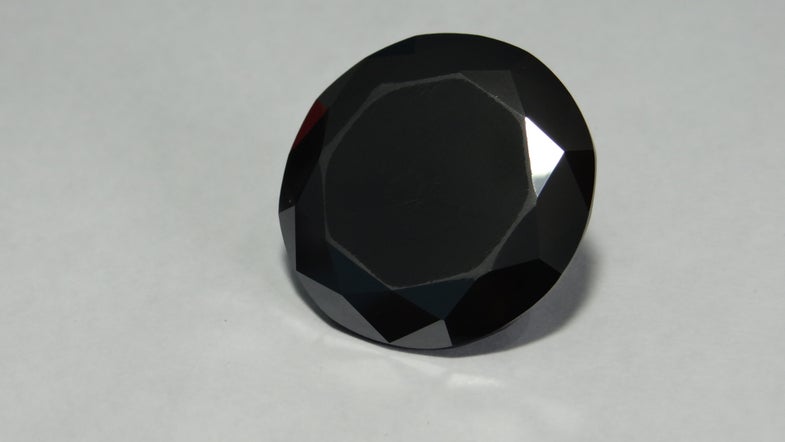 In 1958, the Smithsonian Institution received a plain paper package in the mail. The only hint of its contents was the insurance on the brown carton, registered for one million dollars. Nestled inside the box sat the largest known blue diamond in the world.

Before reaching the museum, the Hope Diamond travelled through the underbelly of London jewel markets, surviving Marie Antoinette’s beheading and the French revolution’s sacking of the crown jewels. But a billion years before it was mined, cut, set, or insured, its true origins likely began a hundred miles below Golconda, India.

The word “diamond” comes from the Greek word adamas, which means ‘invincible.’ Diamonds are the hardest mineral we know of, only scratchable by other diamonds, which is why they are now used for weapons manufacturing. (The jewels proved so useful in World War II that the United States made depriving Hitler of an industrial diamond supply a major war goal.) The gemstone’s molecular structure is what makes it so tough: Diamonds are made of carbon atoms linked together. Each atom shares electrons with four others, forming a five-sided lattice structure that is incredibly strong. Just one carat contains billions of these linked atoms.

But carbon only forms into this particular crystalline structure under the intense pressures and high temperatures that occur hundreds of miles below the Earth’s surface. Carbon can take many other forms, and in fact is one of the most abundant elements on Earth—it’s the chemical basis for all known life. We hear a lot about carbon in its connection to climate change: the combustion of fossil fuels for energy and transportation emits carbon dioxide, for example, which accounts for about 83 percent of all U.S. greenhouse gas emissions. But there’s another cycle that carbon plays a critical role in, known as deep carbon. Although deep carbon cycles may have played been crucial in the origin of life, until recently we understood little about how carbon reacts near the earth’s core, or even how much is stored underground. The answers to these questions may provide new information on the limits and extent of life on our planet.

“Diamonds have inclusions, which provide us clues about what happens in the very deep earth.”

That’s why the Deep Carbon Observatory (DCO) was founded in 2009. The DCO is an international 10-year initiative to get scientists from many areas of expertise to focus on deep carbon. Dimitri Sverjensky, a geochemist at Johns Hopkins and one of the scientists involved with DCI, says, “The deep earth carbon cycle is an area of research that has been neglected until the start of the Deep Carbon Observatory five years ago. These studies will also help us make a connection to the shallow carbon cycle of interest to current global changes.”

Sverjensky has recently calculated how much carbon, and what types, exists in fluids far below the Earth’s surface. In an article published in Nature Geoscience, he reported that even 50 to 100 miles down, there a variety of types of organic carbon exist in fluids. These fluids, may have been transported from the surface into the upper mantle in the form of small plants and shells through plate tectonics, the movements of the Earth’s crust.

That’s big news, because until now, scientists hadn’t known how much carbon can be mobilized in fluids that deep. We still know little about what happens to water at those great depths—although diamonds may prove to be useful here, too.

“We don’t know how the building blocks for life originated, whether from outer space or the earth itself,” Sverjensky tells Popular Science. “Diamonds are helpful for this kind of research because they have inclusions, which provide us clues about what happens in the very deep earth.” These jewels offer information about how carbon-bearing fluids move, “which is what makes earth habitable. So you could fairly say it’s critical to understand.”

Sverjensky’s new model moves science in that direction. “Previous models, for decades, hit a limit at about nine miles down. Beyond that, we couldn’t predict how water would interact with rock,” he says. “This model allows us to make predictions down to 111 miles, which gets us into the zone where we suspect there are intense chemical interactions. Organic species like acetate and propionate–which we’ve known for decades exist at shallow levels–and methane and carbon dioxide could be in equilibrium at high pressures. This helps us to understand how carbon might be carried in water so deep. It also suggests that a chemical basis for life is much deeper than we previously thought.” It’s an idea with far-reaching effects: If we can learn how life on Earth began, or even what the early stages of life looked like, we’ll also have a much better sense of factors that make planets habitable.