Can Birds Be Trained To Bring Down Drones?

Yes, but it's not a good idea 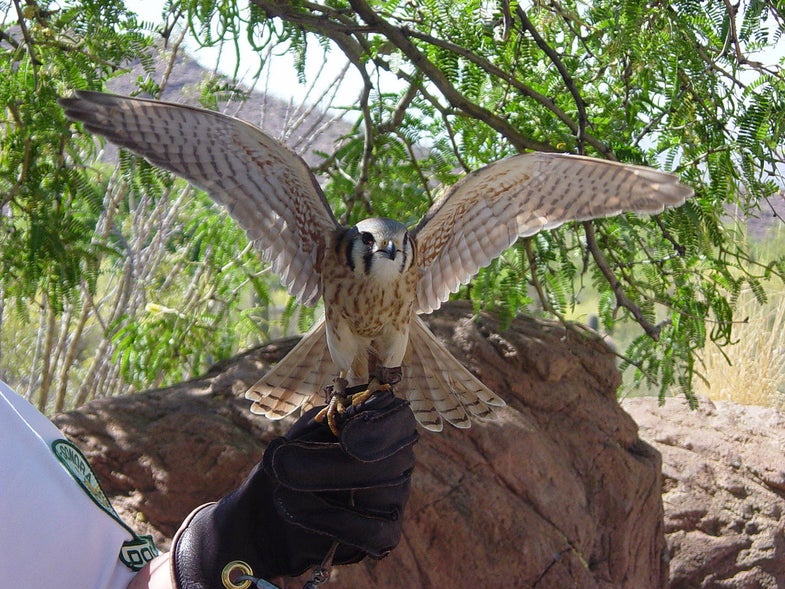 As costs go down and ease of use goes up, more and more drones are going to enter American skies. Last month, the Federal Aviation Authority reported an increase in drones spotted near other aircraft, raising fears that an errant drone may imperil a manned airplane. But drones don’t just pose a risk to human-made aircraft. They can also threaten birds.

In May, the National Park Service banned drones from Yosemite National Park, specifically noting that “drones can have negative impacts on wildlife nearby the area of use, especially sensitive nesting peregrine falcons on cliff walls.” In June, this ban was extended beyond Yosemite to all national parks. Not long after, a tourist crashed a drone into the otherwise-pristine waters of Yellowstone’s Grand Prismatic Spring, reinforcing the risk posed by the technology if used irresponsibly. 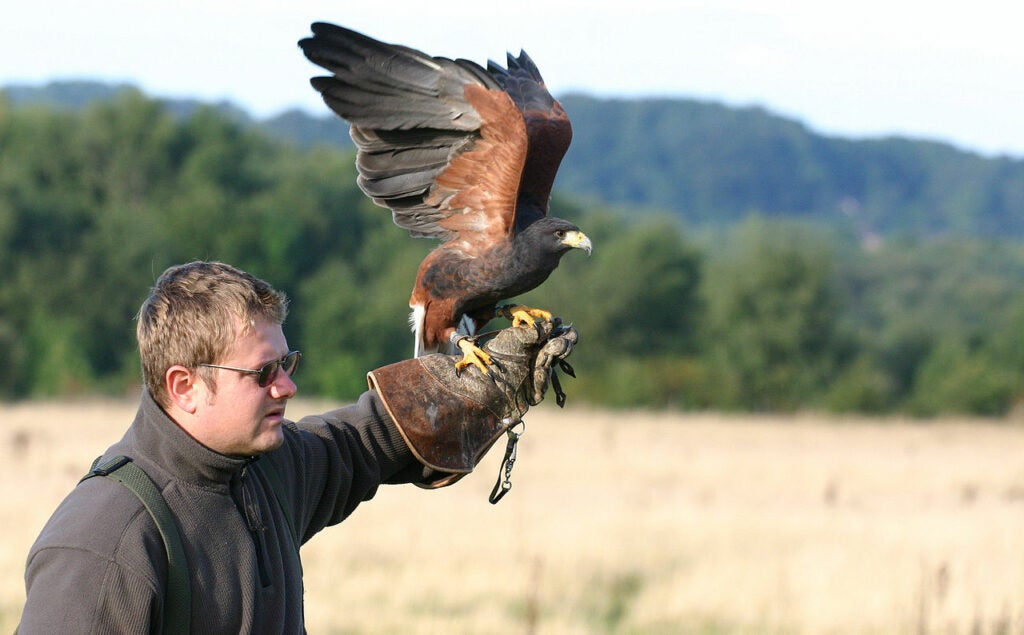 As more artificial flyers enter the skies, they threaten to disrupt ancient patterns and habits of raptors — but what if it were possible to turn the tide. Falcons have existed for millions of years, while drones barely stretch back a century. Furthermore, humans have been training falcons since antiquity, and the birds were widespread enough in Europe by the dark ages that “sixth-century laws of the various Germanic tribes mention fines for the theft or killing of someone else’s hawk.” Is it possible that, with human guidance, birds could learn to defeat the new unmanned interlopers in their airspace?

“The practical reason for why anyone would want to do that is beyond me,”Joey Seabolt, president and director of the Georgia Falconry Association, told Popular Science. “There have been encounters with wild birds with those kinds of devices that are dangerous to the wild animal and the equipment. You certainly wouldn’t want to train a bird to do that.” 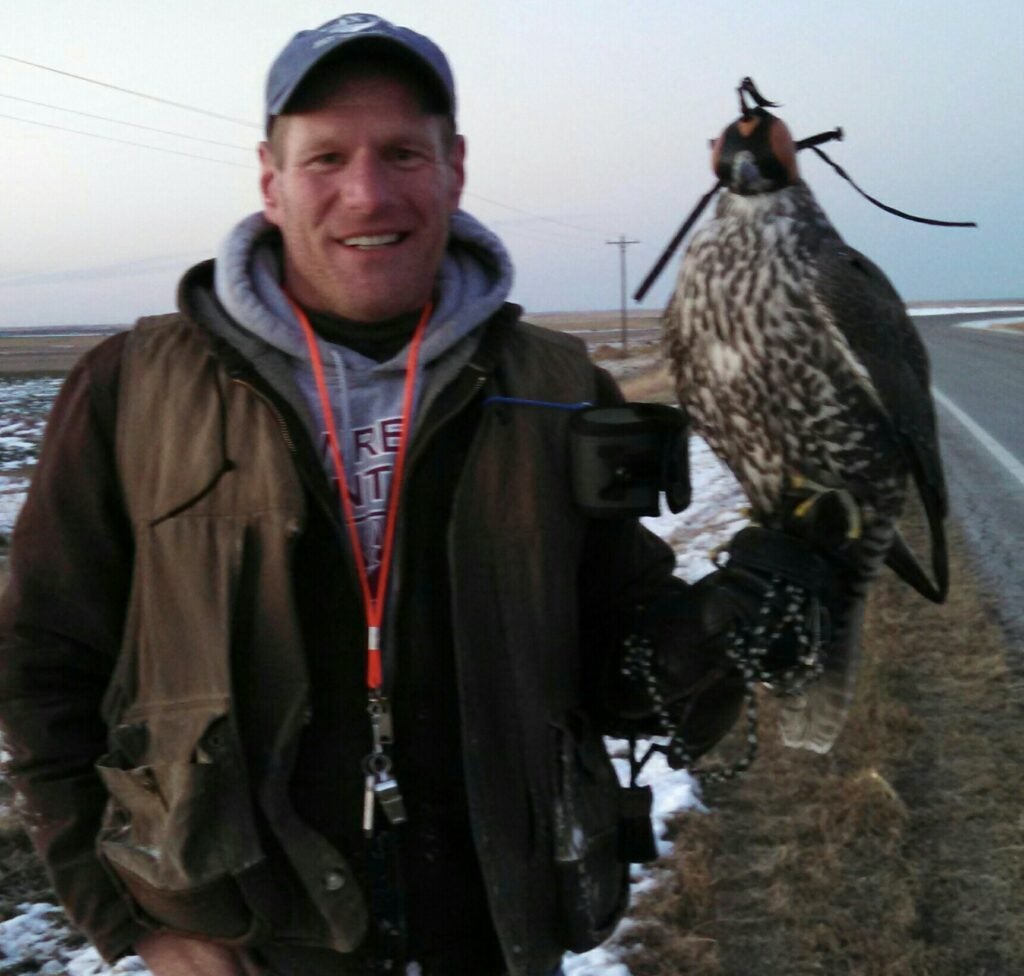 Goose is a Gyr/Saker hybird.

That doesn’t mean trained birds never interact with unmanned vehicles. Falconers sometimes use balloons with meat dangling below them to train the birds to hunt in the air. But the bird isn’t trained to attack the balloon; the raptor, instead, grabs a lure dangling below the balloon and then returns to its human partner, learning that greater and greater reward comes with flying higher and higher.

This training is also done with kites, and at least one falconry supplier even sells quadcopter lures. That lure is attached to a 25-foot long string dangling below the drone, making sure that the bird keeps a safe distance from the drone’s spinning blades.

Without being trained to do it, wild birds will sometimes attack drones. The most striking example exists on YouTube, where this video of a red-tailed hawk attacking a quadcopter went viral in October:

In the video, the hawk is clearly the superior predator, swooping in for an attack and knocking the drone down. The hawk also appears to fly away safe and relatively unscathed after the encounter, while the quadcopter instead tumbles to the ground.

The risk of injury to a bird from a drone encounter certainly seems very real, however, and it could increase as more and more people use drones. But the dangers haven’t yet borne out by arrivals in animal hospitals. I spoke to representatives of both the Lake Milton Raptor Rescue Center and the Raptor Center at the University of Minnesota’s College of Veterinary medicine, and neither could recall any birds brought in specifically as the result of a bad encounter with a drone.

It’s likely even possible that with training, birds could become more comfortable with unmanned aircraft. Falcons are high strung and nervous creatures, so much so that they’re typically hooded for transport, but trainers can habituate them by associating unfamiliar objects, like a lure hung below a kite or a balloon or a drone, with a reward. The bird will become comfortable with that lure, and the strange-moving balloon or loud drone might not be so scary after that. 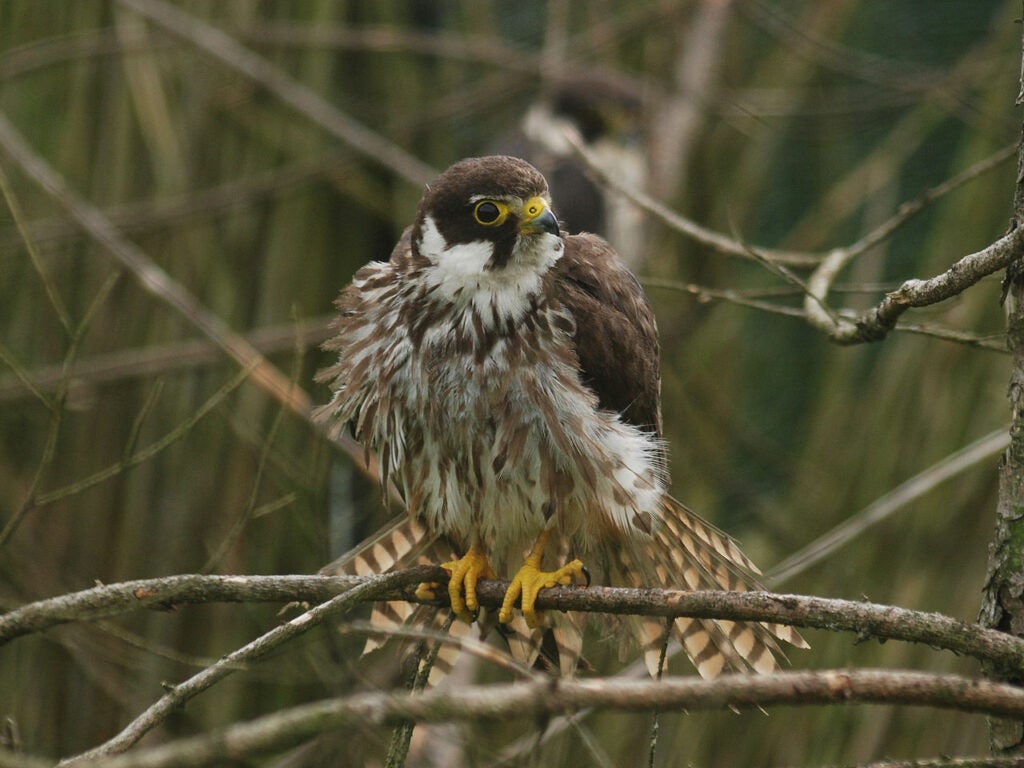 So birds attacking drones is a possible part of the future, but it certainly isn’t an inevitable part. When asked about the future of drones and falconry peacefully coexisting as hobbies, Sellinger said this: “If a raptor chases an RC, it could cause for more clashes between the two kinds of hobbyists.”